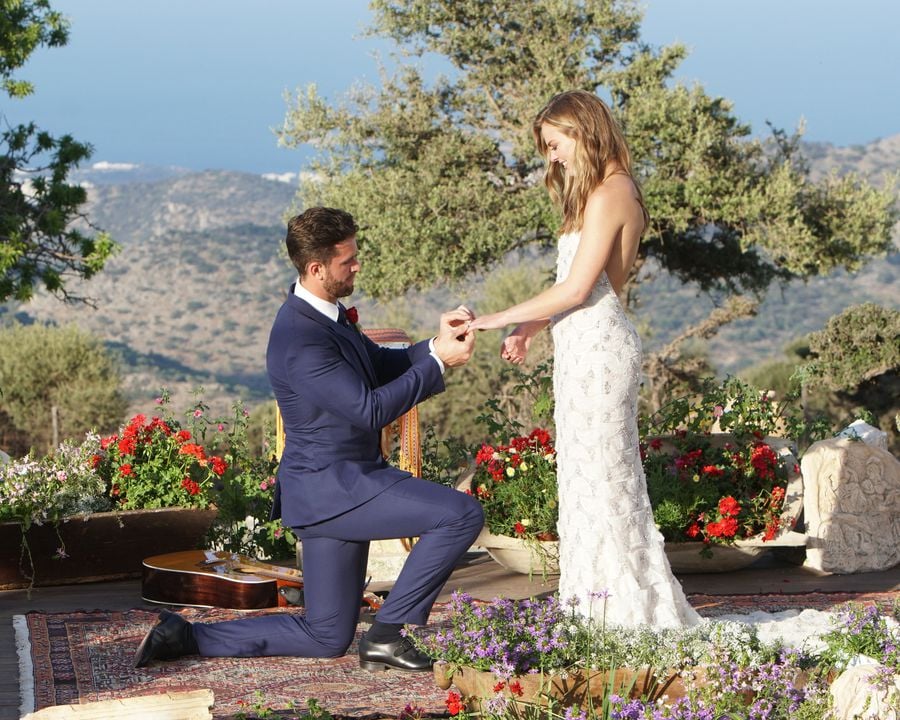 Every member of Bachelor Nation worth their salt knows Neil Lane has provided dozens of engagement rings for the show — but what happens when the relationship doesn't work out? Former Bachelorette star Becca Kufrin went on The Ringer's Bachelor Party podcast this week and revealed that there's actually a place where production hides the "scorned rings." Speaking to host Juliet Litman, Kufrin mentioned a "ring graveyard."

Kufrin famously returned her engagement ring to Arie Luyendyk Jr. when he broke up with her after his proposal on The Bachelor, but there are unused rings on almost every season of The Bachelorette. After all, the star usually gets two proposals at the end of the show. (Because The Bachelor still subscribes to typical gender roles and has the male lead propose, there's only one ring.) Of the proposals that are accepted, not all work out. In fact, Bachelor couples staying together for the long haul is pretty rare, meaning there are a lot of unused rings out there.

It's not new information that the rings go back to production, of course. Other former contestants have spoken about The Bachelor's contract before, citing that they need to stay together for at least two years after the final episode of their season airs to be able to keep it. But now that we know they're all kept together in a special cursed area, we're dying to see it.

TV
Lady Gaga and Jimmy Fallon's Compassion Convo Is a Must-See: "Kindness Is Totally Free"
by Karenna Meredith 4 hours ago

Celebrity Interviews
Just Like Us, Sophie Turner Is Superexcited For Joe Jonas's Quibi Show: "I'm So Proud of Him"
by Kelsie Gibson 4 hours ago

TV
Not Ready to Say Goodbye to the Modern Family Cast? Here's What They're Doing Next
by Amanda Prahl 1 day ago

Gift Guide
20 Gifts to Remember Schitt's Creek, Because We're Not Ready to Say Goodbye
by Monica Sisavat 1 day ago

TV
Money Heist: Everything You Need to Know About Netflix's Hit — Except Part 4 Spoilers
by Amanda Prahl 1 day ago