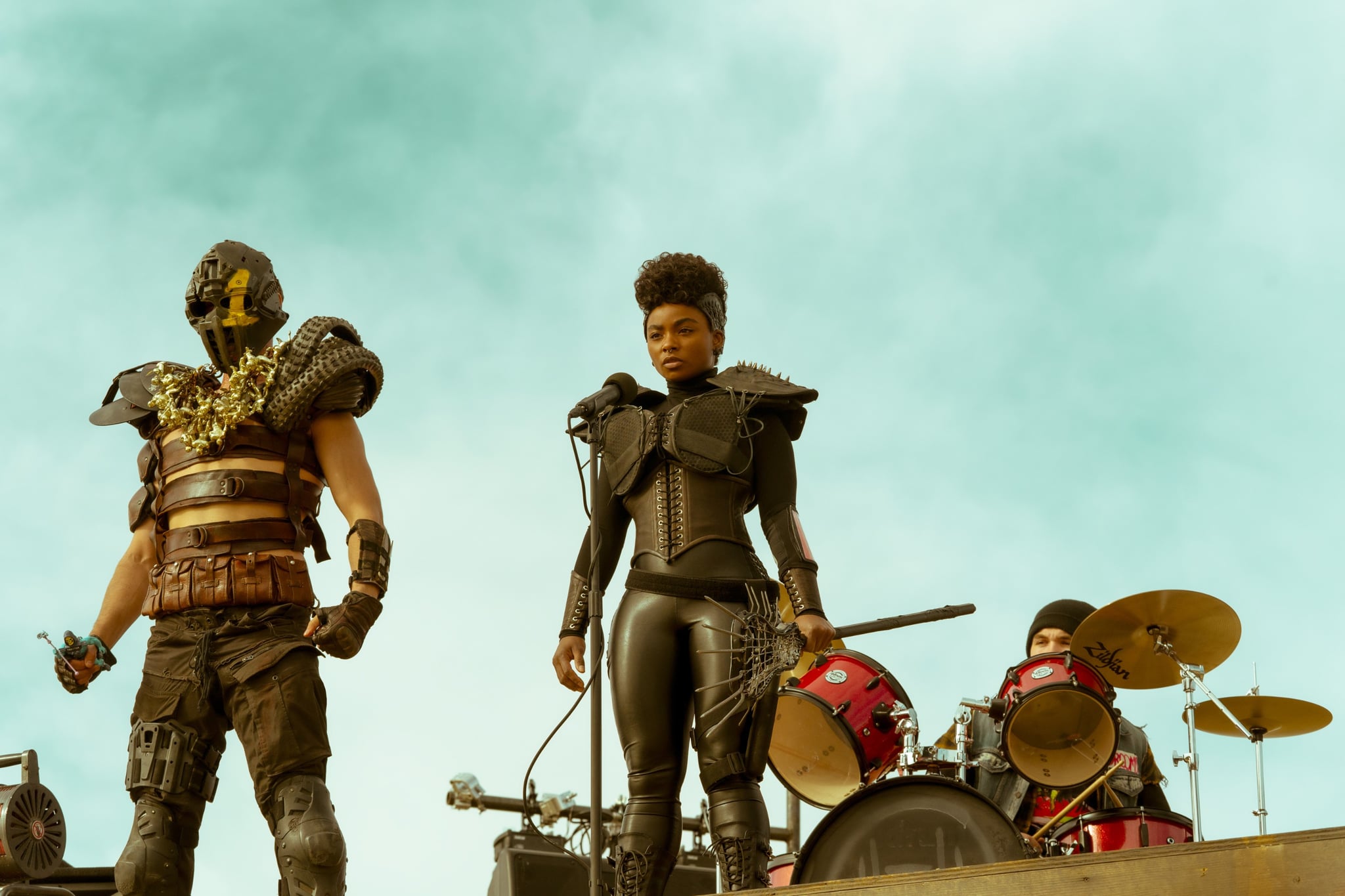 Along with its epic soundtrack and colourful set design, Netflix's Daybreak is packed with witty dialogue perfect for a teen-dominated, post-apocalyptic world, reminiscent of Buffy meets Glee meets Mad Max. One of the quippiest moments thus far is delivered in a speech by Turbo Bro Jock, played by Riverdale heartthrob Cody Kearsley, in episode six. Turbo, who sustained an injury that rendered him speechless, basically taps a microphone, and a super fast flash of words takes over the screen à la the Star Wars opening crawl. Here's a little context around the speech — plus how you can catch it without pausing frame by frame (or resorting to Netflix's new speed features).

First, let's talk about Turbo's deal and the context of the speech. The textbook definition of a bully, Turbo is king of the jocks, and he really doesn't like the protagonist Josh. He does have layers to him — he had a neglectful humanitarian father (played by Joe Manganiello in a man bun). Then there's the whole cloud of love and betrayal around him. Turbo wants to kill Josh, but he also loves Josh's friend Wesley, his former football teammate, in a toxic way where he wants to hurt those close to him. In episode five, Turbo demands that Wesley kill Josh at the mall homecoming dance, but Wesley instead preps his colleagues for battle.

During the epic fight, which Turbo re-enacts with Legos, someone shoots Turbo with an arrow. Turbo then devotes himself to finding the traitor, presenting to them the speech in a flood of onscreen text. It's the most verbose we've seen him since the apocalypse, but don't ask us how his followers understood him!

Chock-full of football and sculpting metaphors, the gloriously absurd speech covers lots of ground. Essentially, Turbo asserts himself as a leader. He likens himself to being the "SPF-120" of his tribe, the only "warm blanket" they have on these "bitter-ass nights." His only request is for their loyalty, for them not to "murder-kill" him. Many pop culture references later, Turbo concludes that he is the sculptor of the vase that is Glendale High. But his followers broke the vase, and now he must glue it back. Thanks to the astute Reddit user Official-POTUS, you can read the entire transcription of the speech here. It's not quite Abe Lincoln's Gettysburg or Martin Luther King's "I Have a Dream" speech, but you definitely have to give Turbo props!