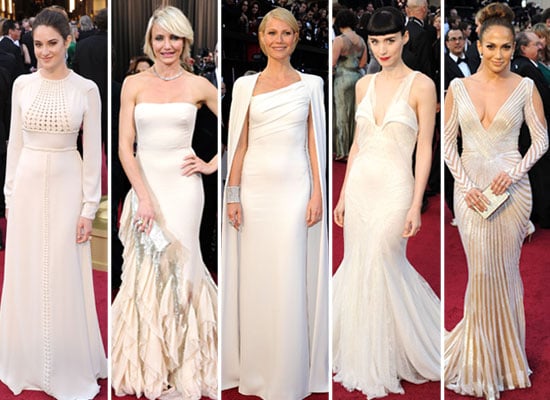 Some famous faces, like Natalie Portman and Emma Stone, chose to match the carpet in crimson hued looks. Natalie had a playful vintage polka-dot dress from Christian Dior as she arrived on the arm of fiancé Benjamin Millepied, and Emma Stone, who presented alongside Ben Stiller, tied up her Giambattista Valli ensemble with bright lips. Best actress nominee Michelle Williams accented her orange Christian Dior dress with a pink clutch, while Viola Davis brought another pop of colour in green Vera Wang, and presenter Penélope Cruz showed shoulder in Armani Privé. Adding to the rainbow of shades was also Melissa McCarthy in a custom blush Marina Rinaldi and Maya Rudolph in an embellished purple Johanna Johnson.

Black was big at today's Oscars, with Angelina Jolie leading the way in a sexy slitted velvet Atelier Versace gown as she arrived with Brad Pitt and his parents Bill and Jane. Bridesmaids' Rose Byrne sparkled in Vivienne Westwood sequins while presenter Tina Fey chose Carolina Herrera. Jessica Chastain and Sandra Bullock mixed up the basic black, with Jessica in a gold embroidered McQueen gown that she accented with $2 million of Harry Winston jewels, and Sandra in a two-tone Marchesa.

There were so many gorgeous gowns on the 2012 Oscars red carpet, so be sure to click through ALL of them, and don't forget to vote on Fab and Bella's Oscars polls!