Awards season saw another glamorous outing with the Screen Actors Guild Awards in LA today. Stars from both the big and small screens brought even more great looks with plenty of ladies stepping out in neutrals. Presenter Zoe Saldana glowed in a white Givenchy Couture gown straight from the Paris runways, while Bridesmaids' Kristen Wiig chose a Balenciaga halter. Viola Davis, who won best actress and best picture for The Help, got gorgeous in a strapless Marchesa, and her winning co-star Octavia Spencer donned Tadashi Shoji. The Good Wife's Julianna Margulies wore a custom beaded Calvin Klein Collection as she arrived on the arm of her husband Keith Lieberthal. 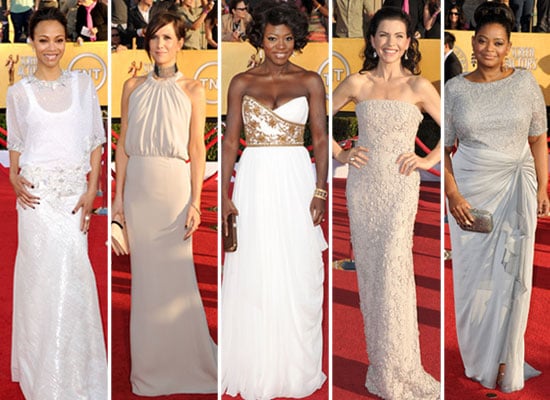 There were a few fun pops of colour today, including a group that matched the carpet in red. Best actress nominee Michelle Williams looked sweet in a lace Valentino gown and Lanvin clutch, and Kyra Sedgwick showed skin in a cut-out Pucci that displayed her rib tattoo of her family's initials. Modern Family's Sofia Vergara continued her sexy streak in a strapless pink Marchesa dress and Lorraine Schwartz jewels, which were front and centre when she took the stage with her co-stars to accept the best TV comedy ensemble statue. Emily Blunt got bright in a green Oscar de la Renta next to husband John Krasinski, and The Help's Jessica Chastain went with a bold blue Calvin Klein.

Angelina Jolie led the pack of black looks in a slinky Jenny Packham gown, and Ashlee Simpson followed suit in a sequin number by the same designer when she arrived with boyfriend and Boardwalk Empire nominee Vincent Piazza. Emma Stone mixed things up with a short McQueen and 30 Rock's Tina Fey went strapless in Versace. Melissa McCarthy, who was nominated for Bridesmaids, joined the dark-hued dresses in navy Badgley Mischka. There was so much exciting fashion and beauty on today's red carpet so be sure to vote on all of our SAG Awards polls here!

Award Season
Kerry Washington, Tracee Ellis Ross, and More Are Donating Their Emmys Looks For a Good Cause
by Sarah Wasilak 15 hours ago

Award Season
For the Love of Fuchsia — We're All About H.E.R.'s Custom Vera Wang Qipao Dress at the Emmys
by Chanel Vargas 15 hours ago

Award Season
Taylor Swift Left Her Cardigan at Home For the ACM Awards, and Wore This Chic Outfit Instead
by Karenna Meredith 3 days ago

Celebrity Style
The Venice Film Festival Is Bringing Back the Glamour of the Red Carpet, and Oh How We Missed It
by Hannah Weil McKinley 2 weeks ago