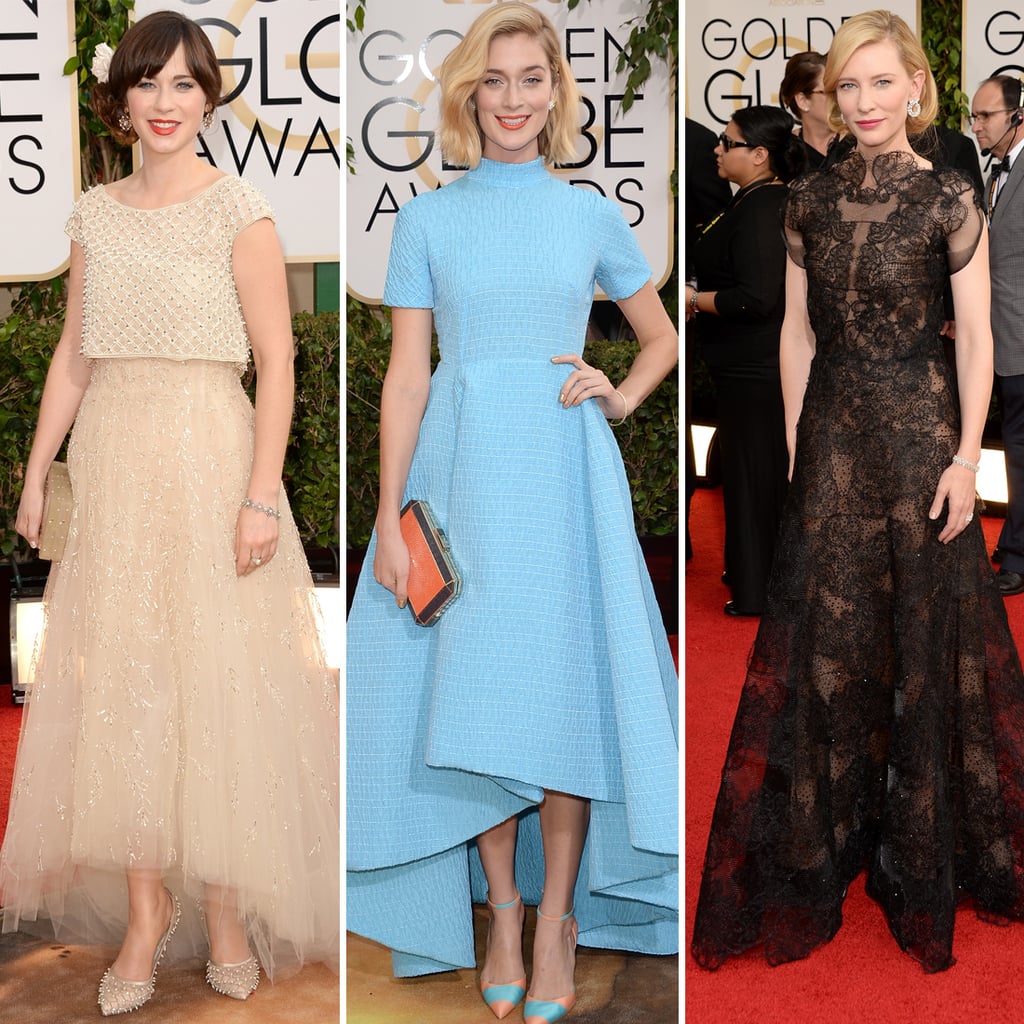 Every year the Golden Globes draws Hollywood's biggest names onto the red carpet — and with them, the glamorous dresses we'll be drooling over for months. This year, Zooey Deschanel, Caitlin Fitzgerald, Cate Blanchet, Zoe Saldana, Naomi Watts and Lupita Nyong'o brought the best red carpet looks.

Meanwhile, Cate Blanchett continued her reign as red carpet queen at the Golden Globe Awards. While she won Best Performance by an Actress for her role in indie flick Blue Jasmine, it's Cate's black lace look that we want to give a trophy. As if the black lace and tulle gown by Armani Prive wasn't glamourous enough — the blonde actress added extra wow factor with glittering accessories.

Zoe Saldana's off-the-shoulder Prabal Gurung dress was on the shorter side when compared to some of the other floor-sweeping styles, but the floral applique and intricate detailing definitely made up for it. Meanwhile, Naomi Watts nailed red carpet glamour in a shimmering Tom Ford column gown and Lupita Nyong'o had us transfixed in a red silk Ralph Lauren Collection gown. We're major fans of the simple silhouette and the stunning off-the-shoulder cut is perfect with Lupita's simple accessories. The look reminds us of Gwyneth Paltrow's Tom Ford gown at the 2012 Oscars.

Now over to you — who was best dressed at the 2014 Golden Globes Awards?

Award Season
Annie Murphy Wore Alexis Rose's Necklace to the Emmys, and I Feel Like That Needs to be Celebrated
by Karenna Meredith 42 minutes ago

Award Season
Kerry Washington, Tracee Ellis Ross, and More Are Donating Their Emmys Looks For a Good Cause
by Sarah Wasilak 1 hour ago

Award Season
Jameela Jamil Is Relatable as Hell For the Emmys, Wearing No Bra, No Heels
by Nikita Charuza 1 hour ago

Award Season
For the Love of Fuchsia — We're All About H.E.R.'s Custom Vera Wang Qipao Dress at the Emmys
by Chanel Vargas 1 hour ago

Award Season
Jennifer Aniston Wore a Slinky Black Dress to the Emmys, and It's Just SO Jen
by Nikita Charuza 1 hour ago

Award Season
We Want to Be at the Schitt's Creek Emmys Party — Don't Worry, They're Being Safe!
by Amanda Prahl 1 hour ago

Award Season
Ramy Youssef Recorded His Socially Distanced Emmy Loss, and We Don't Know Whether to Laugh or Cry
by Kelsie Gibson 1 hour ago