Just the night before, Rooney Mara joined sister Kate on the red carpet for the premiere of her new show; now Kate is returning the favour. The actress stepped out for the NYC premiere of Rooney's new film, Side Effects, and even followed up with a sweet tweet about her sister's performance. The sisters' arrivals gave us a side-by-side comparison of their personal styles. They set the stage for a style battle with obvious contrasts. Rooney opted for a creamy white Alexander McQueen confection and Kate stepped out in a flirty LBD, but each dress boasts a feminine fit-and-flare shape and a more fashion-forward cut. Kate's is more understated, and the true beauty of Rooney's dress is in the gorgeous floral appliqués and embellishments. Rooney is also the first to bring McQueen's Pre-Fall '13 collection to the red carpet. As for the finishing touches, Kate looked to a sleek metallic clutch and Nicholas Kirkwood platform pumps with a little more personality, while Rooney let the gorgeous dress take the focus, also choosing Kirkwood heels, but more pared-down, nude peep-toes. Now, study up and cast your vote for the sister who stole the spotlight on last night's red carpet. 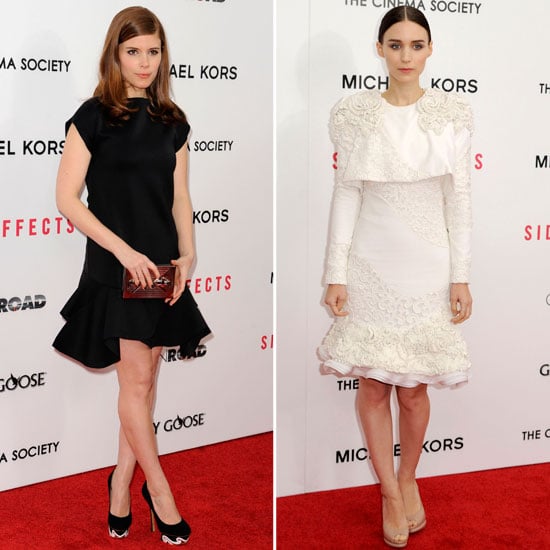