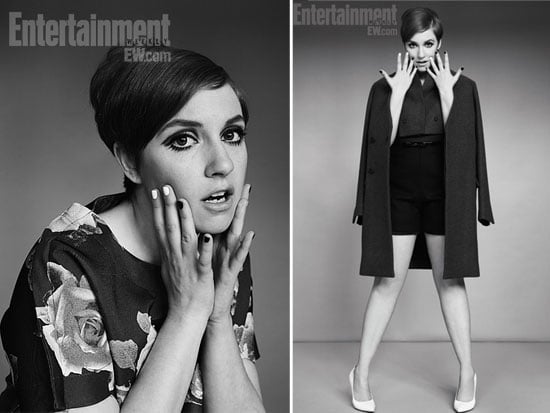 2012 has been a good one for Lena Dunham. Her hit HBO show Girls has gained cult-like status (has you seen the season two trailer?), she's scored herself a $3.5 million book deal and was nominated for an Emmy. And now she's gone a got herself a new look. We usually love Lena's low-key, fuss-free but interesting sense of style, but Entertainent Weekly has done the unexpected and given Hannah Lena a chic, Twiggy-inspired makeover for their latest issue. Floral-print shift dresses, pointy toed pumps and pea coats are a step up on the polished scale for the writer/director/actress, and we like it! Take a look inside and zoom in on Lena's new '60s style. Images courtesy of and Ruven Afanador and Entertainent Weekly.

Celebrity Interviews
The Marvel Cinematic Universe Is About to Get Weird, and It All Begins With WandaVision
by Mekishana Pierre 1 week ago

Celebrity Style
Emily Ratajkowski Found a New Way to Show Off Her Baby Bump, and It Screams Emrata
by Nikita Charuza 3 weeks ago

Celebrity Style
Emily Ratajkowski Is the Essence of Sexy, Bold Maternity Style in This Cut-Out Dress
by Sarah Wasilak 3 weeks ago

Models
Halima Aden on Diversity in the Modelling Industry: "This Isn't a Trend . . . These Women Are Here to Stay"
by Sarah Wasilak 05/10
Latest Fashion
×