The red carpet at today's Golden Globe Awards was filled with stars in their finest looks. Charlize Theron stole the show in a gorgeous Dior gown, while Kate Winslet, who picked up the award for best actress in Mildred Pierce, posed in a black and white look by Jenny Packham. Angelina Jolie arrived on the arm of Brad Pitt in a neutral Atelier Versace with a pop of red. Presenter Kate Beckinsale wore Roberto Cavalli for her turn on the carpet with husband Len Wiseman, and Fashion Star's Nicole Richie got glamorous in a beaded Julien Macdonald number and a House of Harlow clutch. 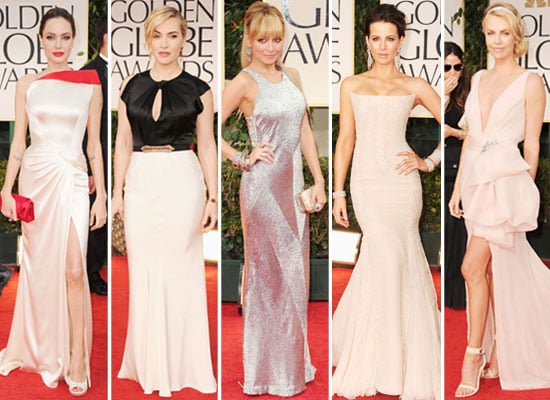 Red was a hot colour with presenter Reese Witherspoon in a sexy, fitted Zac Posen, and George Clooney's girlfriend, Stacy Keibler, in a brightly hued Valentino gown with a bow detail. Natalie Portman also went bright in a pink Lanvin after spending the weekend with her family in Santa Monica. The Help's Viola Davis showed leg in Emilio Pucci, and Emma Stone broke away from her green streak with a two-tone Lanvin look.

Things took a dark turn with a group of ladies choosing classic black for tonight's big event. Rooney Mara, who was nominated for best actress in The Girl with the Dragon Tattoo, continued her run of daring ensembles with a cut-out Nina Ricci. Mila Kunis presented the best supporting actor award with Gerard Butler in Dior while Julianne Moore went with a strapless Chanel. One of the event's winners, Claire Danes, showed skin in a backless J. Mendel and presenter Salma Hayek rocked an edgy Gucci as she arrived with husband François-Henri Pinault.

There was more colour mixing up the carpet with Modern Family's Sofia Vergara in a blue fishtail Vera Wang and Kelly Osbourne in a Zac Posen gown of the same hue. My Week With Marilyn winner Michelle Williams accepted her statue in a velvety Jason Wu, while Melissa McCarthy took her turn in front of the cameras in a green Badgley Mischka, and Evan Rachel Wood wowed in a Gucci Premiere halter.

Be sure to vote on all of our beauty and fashion polls and take a look at ALL the gorgeous gowns here!

Celebrity Style
The Venice Film Festival Is Bringing Back the Glamour of the Red Carpet, and Oh How We Missed It
by Hannah Weil McKinley 1 week ago

Award Season
Can Someone Please Add "Beauty Icon" to Lady Gaga's Credentials For This Tricon Award?
by Danielle Jackson 2 weeks ago