It's always nice to talk about the finer things in life, you know, Bowie, vintage, denim, rock 'n roll, ch-ch-ch-ch-Cherry Bombs. The Runaways, starring Kristen Stewart and Dakota Fanning, hits cinemas soon, but I'm guessing all you Kristen fans already knew that. Chronicling the all-girl rock band from the '70s, we'll witness the early start of Joan Jett and her rockin' entourage. I don't know much about the band, though I know its music. And music movies always appeal to me — don't we all love Almost Famous? We got the wardrobe scoop from the costume designer, Carol Beadle; here's her background, how she researched the rebellious rockers, and where she found the vintage duds. Stay tuned for more! 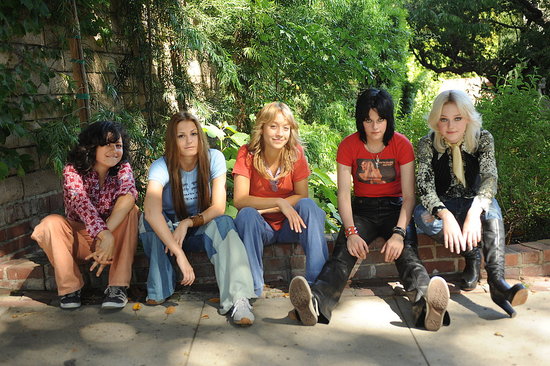 You have a background in music? Yeah, big time. That's what I’m most known for. I have won awards for music videos. Would you say that’s your favourite thing to do as well? Honestly, they’re crazier. But, for sure, I love them the most. I have the most creative freedom of any commercial kind of work of that style, unless you do print, which I love as well, or editorial. I grew up with music videos, I’m an MTV baby, even though MTV rarely shows music videos anymore . . . I know (laughs). Definitely a much different world isn’t it? I feel fortunate that I was involved in it when it was still a thriving, cool industry. I remember the first music video that ever really blew my mind was Bowie, Ashes to Ashes — that’s the first kind of concept, creative, really avant-garde. I had three older brothers and sisters, my brother literally woke me up one night to see the Stones on midnight special. I had a lot of music and visuals, and books and stuff, just been in my life from default; we were just a really musical family. To read the rest and to see more fun stills from the movie,read more

. That’s a great world. In terms of clothes for the movie, where did you shop? Where did you go? Where did you start? I went to pretty much every single costume house in the city (LA). We didn’t have a massive budget on this. There are so many costume houses out here — much better than in NY. I got the best stuff from Palace Costumes. Like every big designer has been to Palace to pull reference. They’re just the bomb. Universal Costumes has some good things, too. I’m really selective so we did some heavy-duty pulling, lots and lots of pulling, but it had to be really amazing to make it on to the girls. And then for shops, we went everywhere — there’s a really great shop called Lemon Frog, she gets really great stuff. We went into American Rag. What we didn’t really do too much of was Resurrection and Decades because it’s just a little too high end. If we were shooting somewhere, and there was a vintage store next door, I would pop in and find a great Lurex halter top or something. It was like that — we’d just try to keep collecting, but try to be super selective. How much time did you have to pull the clothes together? Like four weeks, but a lot of that was taken up by research. Then, I really didn’t have the girls until weeks before and they were either recording or practicing their instruments so I didn’t have a lot of time with the girls. We had so much to fit and alter, so it was pretty challenging. And every day I had different looks for all them.You can tell in the movie there’s a lot of changes on them. You probably can’t see — you never see as much as you really do. So what did you do for research? Did you meet the original Runaways? No, I didn’t actually meet with them because Floria (the director) has been working on this for three years, but she was actually able to obtain their scrapbooks, their original scrapbooks. Which was just fantastic. I just started downloading and looking through magazines and newspapers for every possible picture of them and then I also researched the music of the time. I already had a lot being a massive Bowie fan. I had my original Bowie book that I bought when I was 15. I would even research ads in London newspapers, like these ads: “Buy these elephant pants," the English term for those pants with super-wide legs. We looked for stuff like that, everyday culture, but more music magazines. Like Cream. All the American ones, I’ve tried to keep it very American, of course. Except later when they go travelling a bit. Everything I could find on LA and the punk scene. Every book I could possibly find.