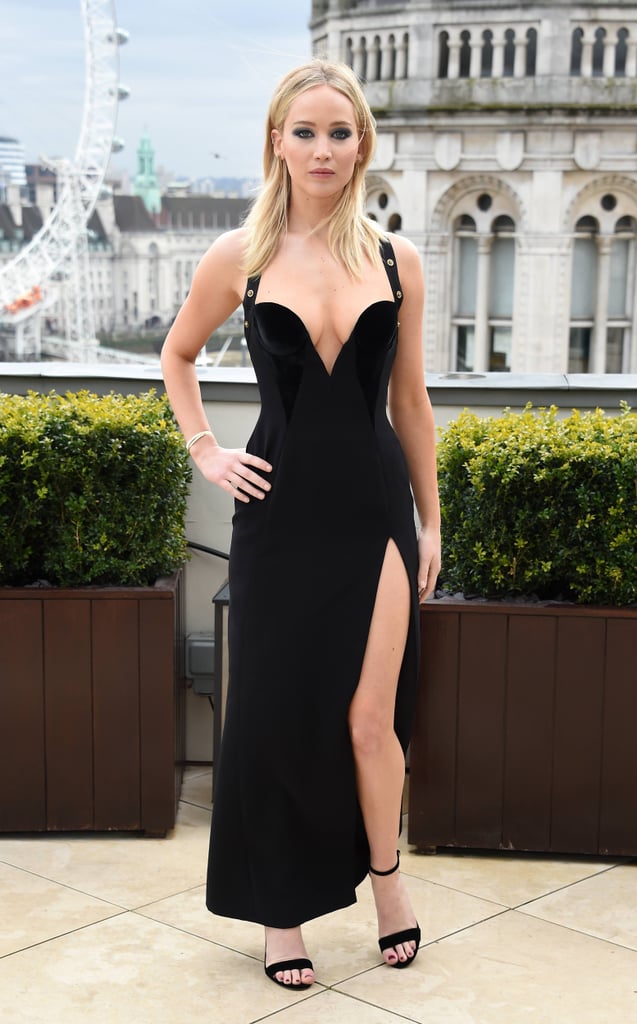 If You Were Mad About Jennifer Lawrence Wearing a Dress in the Cold, She Says, "Get a Grip"

Update Feb. 21: After Jennifer Lawrence wore a black Versace dress to the London photo call of Red Sparrow, a cast photo ignited a debate on social media. While all of Jennifer's co-stars were wearing coats (it's about 5 degrees in London this week), the star chose to rock her dress without outerwear. Some Twitter users immediately labelled the situation as "sexist," and "depressing," assuming Jennifer was forced to show skin because she was female.

The actress caught wind of the conversation and quickly dismissed the assumptions and sexist comments with a lengthy message on her Facebook page.

"Wow. I don't really know where to get started on this 'Jennifer Lawrence wearing a revealing dress in the cold' controversy," she writes. "This is not only utterly ridiculous, I am extremely offended. That Versace dress was fabulous, you think I'm going to cover that gorgeous dress up with a coat and a scarf? I was outside for 5 minutes. I would have stood in the snow for that dress because I love fashion and that was my choice."

Jennifer then went on to say this conversation distracts from the "real issues" and told people to "get a grip." Read the whole message for yourself, below.

Original Post: When a star goes around the world to promote her new film, her red carpet wardrobe has to be top notch. At least, that's the case for Jennifer Lawrence, who popped up in London to celebrate her new film, Red Sparrow. For a photocall, Jennifer slipped into a sexy velvet dress, which was plucked from Versace's Pre-Fall 2018 collection. The black gown featured gold Medusa buttons on the straps and a sultry split up the side of the dress. She wore a gold Ileana Makri cuff to complete the look.

The fashion house of Versace is known for taking sensual dressing to the next level, and Jennifer's dress proved that. Her look was also quite similar to a dress Elizabeth Hurley wore back in 1994 for the movie premiere of Four Weddings and a Funeral. Elizabeth (who was also in London at the time) wore a gold-safety-pin black dress with a fitted bodice and thigh-high slit design. All of those elements were echoed in Jennifer's modern-day Versace look. The dress was a bold style move for Jennifer, and it paid off in the best way. Read through to compare the two actresses in their gowns.

Fashion Trends
Juicy Couture Relaunches Its Website With Velour Tracksuits — Paris Hilton, Are You in on This?
by Sarah Wasilak 18 hours ago