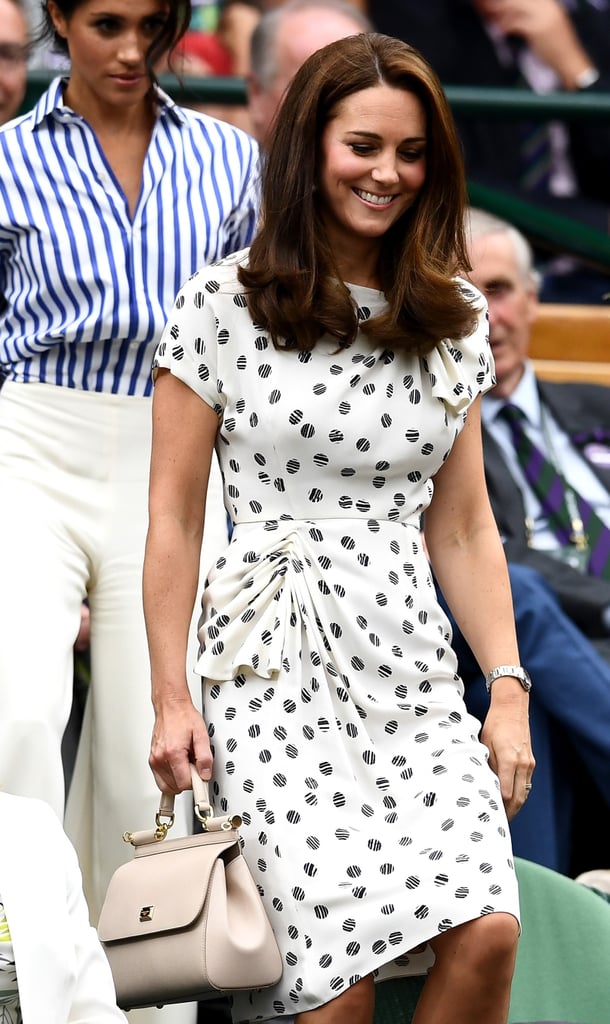 Kate Middleton is no stranger to Wimbledon. As patron of the All England Lawn Tennis and Croquet Club, she often attends alongside Prince William or members of her tennis-mad family. But when she made an appearance at the women's singles final on Saturday, she had a new companion: her sister-in-law, Meghan Markle. The Duchess of Cambridge and the Duchess of Sussex put on a seriously stylish show as they settled down to watch the men's semi-final. Kate stuck to her Wimbledon go-to, a pretty Summer dress, this time opting for a slim-fitting cream design with black spot by one of her go-to designers, Jenny Packham. The dress had gathered fan-style ruffles at the shoulder and hip, giving it a 1940s feel. Meghan, meanwhile, opted for a more modern, preppy look in her striped button-down and cream pants by Ralph Lauren.

It's been a busy royal week for everyone, including Kate. She started on a high at Prince Louis's christening, where she stuck to tradition by wearing a white Alexander McQueen ensemble. The following day she joined members of the royal family at the centenary celebrations of the RAF, where she turned to McQueen once again, this time for a powder blue look. Saturday's tennis required less of the formality of those royal engagements, and we loved seeing Kate more casual. She often chooses Wimbledon as a chance to show her softer side, and this was once again the case. Keep reading to see for yourself.