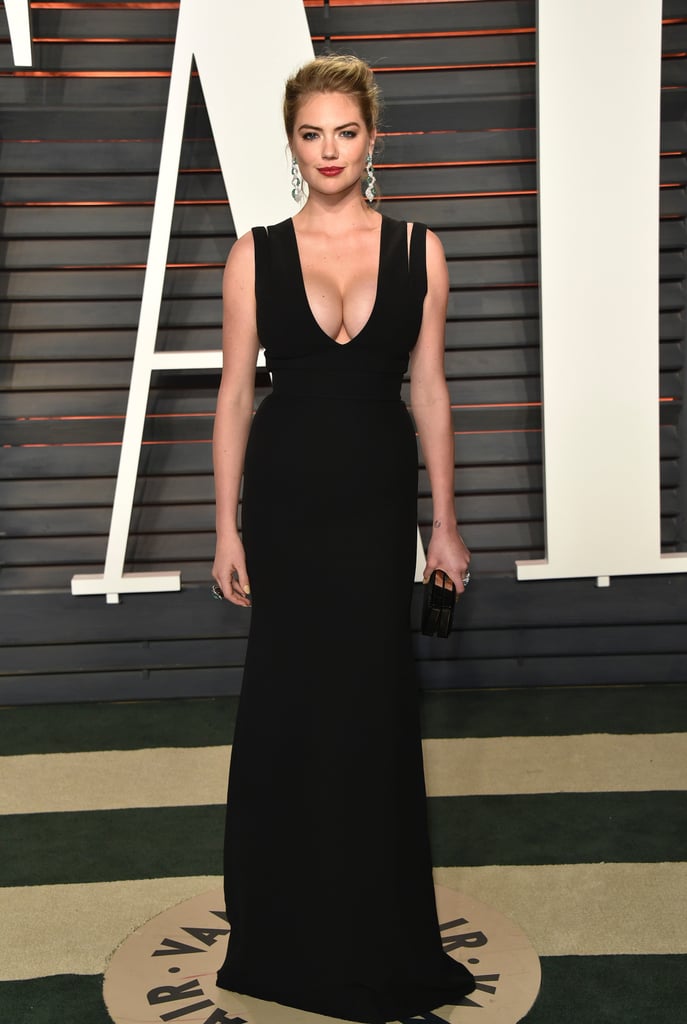 Update June 13, 2018: After being accused of sexual misconduct and harassment by five women, including Kate Upton, Guess's Paul Marciano has stepped down from the company, with his brother, Maurice Marciano, taking his place. According to The Cut, the company made a statement that confirmed "[Marciano made] inappropriate comments and [sent] texts and unwanted advances including kissing and groping." Guess and Marciano came to a settlement of $500,000 after an internal investigation.

Update March 1, 2018: Kate Upton released a new statement about her case against Guess cofounder Paul Marciano. She revealed on her Instagram account that the internal investigation is now being conducted by Paul's "personal lawyer" and says that the entire episode "seems like a stunt, and is a clear indication . . . that Guess is not taking [her] claims seriously." The model then thanked everyone who has supported her. Read her full Instagram message ahead.

Update Feb. 20, 2018: After Kate Upton gave a detailed interview about Paul Marciano sexually harassing her, the Guess co-founder has stepped down from his title. According to the company, Marciano will give up his day-to-day responsibilities until the sexual misconduct investigation is complete. "I have pledged my full cooperation to the Company, and I have the utmost confidence in our CEO, Victor Herrero, to continue leading the Company during this time," Marciano said.

Update Feb. 8, 2018: Kate Upton gave an interview to Time saying that her relationship with Paul Marciano was "an emotional and non-stop battle of games, power struggles and creative avoidance tactics." The model recounted her first meeting with Paul, saying, "After the first day of shooting the Guess Lingerie campaign [on July 25, 2010], Paul Marciano said he wanted to meet with me. As soon as I walked in with photographer Yu Tsai, Paul came straight up to me, forcibly grabbed my breasts and started feeling them — playing with them actually. After I pushed him away, he said, 'I'm making sure they're real.' Kate continued to describe several disturbing examples of unprofessional behaviour from Paul in her detailed interview. The model then said, "I'm sick of being silenced and expected to sweep everything under the rug. I'm sick of being expected to laugh off these aggressive advances and accept the power imbalances that exist. I'm sick of being expected to endure all of this while being polite and professional through it all."

Update Feb. 2, 2018: Paul Marciano has responded to Kate Upton's allegations of sexual misconduct, claiming that he is shocked and will not apologize because he has done nothing wrong. In a statement to TMZ, Marciano said, "[He] can't figure out what she claims to have against him" and he has "neither touched Upton nor been left alone with the 25-year-old supermodel." He went on to say, "If she has a claim, there's one place to tell the truth and that's in court or to the police." The fashion executive finished his statement by saying, "the company decided to cut ties with her . . . and this might be her motivation."

Face of Guess Jennifer Lopez, who recently stepped out for a celebratory company event, also responded to the controversy, stating to Daily Mail: "My position on these issues is well known, as I have been very vocal about them. I do not condone any acts of sexual harassment, violation, or misconduct. Any accusation should be fully and thoroughly investigated. I will continue to support our rights as women."

Original post: Kate Upton, along with notable models like Hailey Baldwin and Gigi Hadid, has starred in Guess campaigns. Jennifer Lopez was just crowned the oldest Guess Girl ever (she's the face of the brand's Spring '18 campaign). But now, Kate is speaking out against Paul Marciano, a co-founder of the company. On Jan. 31, Kate wrote on Twitter, "It's disappointing that such an iconic women's brand @GUESS is still empowering Paul Marciano as their creative director #metoo."

The hashtag #MeToo started after the Harvey Weinstein scandal as a way for women to share their own stories of being sexually harassed in order to highlight the magnitude of the problem. Though Kate doesn't specify what, or if, Paul did anything to her personally or to other models, she did reshare the same message on her Instagram account. We have reached out to Guess for a comment on the controversy.

Related:
Why Time's Up Was the Vital Next Step the #MeToo Movement Had to Take
Previous Next Start Slideshow
Join the conversation
ModelsCelebrity TwitterPaul MarcianoSexual HarassmentBrandsControversyFashion NewsFashion InstagramsKate UptonGuess
More from POPSUGAR
From Our Partners
Related Posts

Celebrity Twitter
Y'all, Who Gave Victoria Monét's Chimpanzee Friend Permission to Serve This Hard?
by Victoria Messina 1 day ago