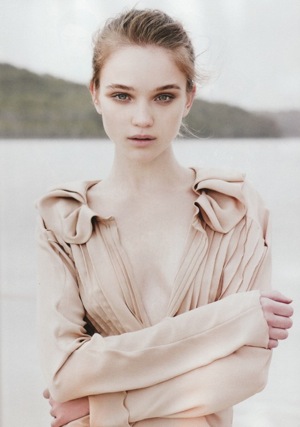 This week, Anna Wintour, Michael Kors, and Natalia Vodianova attended Harvard's 13th annual Public Forum to participate in a forum titled “Health Matters: Weight and Wellness in the World of Fashion” to discuss the fashion industry's issues with anorexia, bulimia, and other eating disorders. During the forum, Kors declared he will not hire any models under the age of 16. “I think super-young girls used to be the exception,’’ Kors said. “There’s always been a Twiggy, or a model who is very young. But they were few and far between. Now, they’re completely common. That’s something I see as a huge problem.’’ Natalia Vodianova also spoke up about the pressure of losing weight after giving birth: “After I gave birth I lost a lot of weight, and under the pressure of the industry I realized much later I had an eating disorder. I went to therapy, I’m probably breaking my own boundaries but I recognized I had a problem.” Michael continued, stating, “The age of models really has to become a priority. We need to give these girls a chance to grow up.”

There's no denying modelling can be a career filled with pressures, and I tend to agree with Kors in thinking that 16 really does seem too young to start such a high-flying career. What do you think?

Wedding
Très Chic! Natalia Vodianova Is the Picture of Elegance in This Flowy Collared Wedding Dress
by Chanel Vargas 12 hours ago

Models
Halima Aden on Diversity in the Modelling Industry: "This Isn't a Trend . . . These Women Are Here to Stay"
by Sarah Wasilak 2 days ago

Celebrity Style
My Heart! Gigi Hadid Looks So Cute Showing Off Her Baby Bump in a Crop Top and Bucket Hat
by Nikita Charuza 3 days ago

Models
Christian Siriano Hosted a NYFW Runway Show at His House, and Coco Rocha Jumped in the Pool
by Nikita Charuza 4 days ago