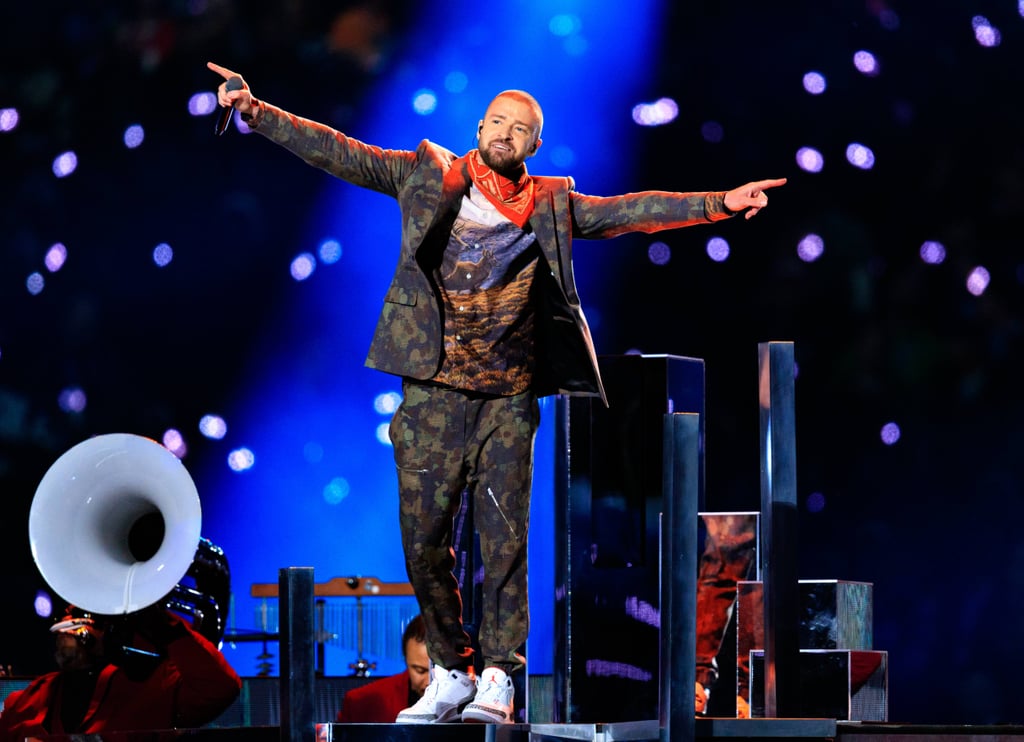 Justin Timberlake is a man of the woods — it's his pride! The 37-year-old singer took the stage during Sunday night's Super Bowl halftime show to make history. Not only is he the first artist to perform three times, but it also seems like it's the first time the crowd has more to say about his outfit than his actual performance.

Many immediately called out his eyebrow-raising Bass Pro Shop-esque ensemble, but our eyes immediately went to his feet. Justin debuted a special Air Jordan 3 designed by Tinker Hatfield during the game. According to ESPN reporter Darren Rovell, the shoes were released during the half-time show and sold out immediately. As for the rest of his outfit? Well, it doesn't sound like people are running to purchase the outdoorsy look.

Stella McCartney made Justin's camouflage Prince of Wales suit, which was clearly inspired by his Man of the Woods album. Although fans were quick to criticize his shirt, adorned with artwork by British artist Martin Ridley, all we have to say is: it's called fashion, sweetie. The designer wrote on Instagram that the custom pieces were inspired by her upcoming Autumn/Winter 2018 collection.

We think Justin could wear anything and look fabulous. According to the rest of the internet, well, they felt differently, roasting him for the "hobo chic" look. Read on for some of the hilarious reactions.

Related:
Pink Was Probably More Comfortable Than You in Your PJs While Singing the National Anthem
Previous Next Start Slideshow
Join the conversation
Celebrity StyleSuper BowlStella McCartneyJustin Timberlake
More from POPSUGAR
From Our Partners
Related Posts