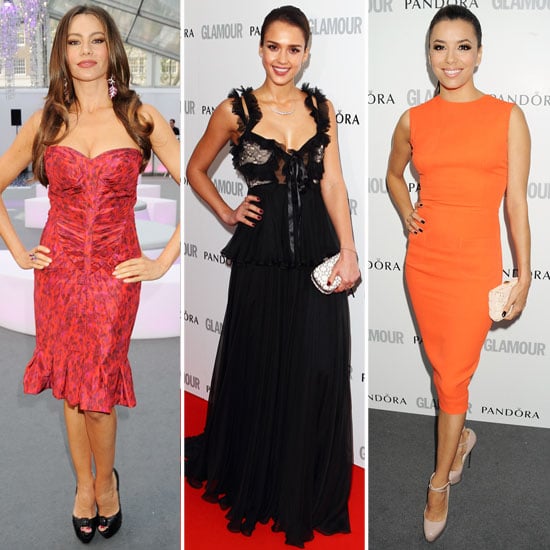 Jessica, Eva, Sofia, and More Dressed to Impress at Glamour's Women of the Year Awards in London — Who Nailed It?

Further proof that the killer style didn't slow with theclose of the Cannes Film Festival? Last night's A-list red carpet at Glamour's Women of the Year awards in London. Jessica Alba stepped out in a tulle and satin ribbon-embellished black gown for a touch of darker elegance, bombshell Sofia Vergara stuck to her body-con silhouettes in a pink-hued Zac Posen fit-and-flare minidress, and Eva Longoria kept it sleek in a superbright orange Victoria Beckham sheath and nude pumps. But it doesn't stop there: Lea Michele chose an ink-blue pre-Fall 2012 Zac Posen gown that draped off her shoulders perfectly, Natalia Vodianova donned a more futuristic take on the LBD, and Kylie Minogue shimmered in a gold Stella McCartney confection. We've rounded up nine of the chicest celebs to hit the awards' red carpet — now it's time for you to weigh in. Let us know in the comments below who gets your vote for best dressed!

Celebrity Style
Ariana Grande's Outfits in "Positions" Are the Perfect Mix of Sexy, Sassy, and Sophisticated
by Nikita Charuza 7 hours ago

Fashion Trends
Storm Reid Loves Her Cherry-Red Pantsuit So Much, She Put on Beyoncé to Mark the Occasion
by Chanel Vargas 5 days ago

Celebrity Style
Kamala Harris Dances in a Rainstorm — Of Course, Converse Are the Best Shoes For That
by Sarah Wasilak 5 days ago
Latest Fashion
×