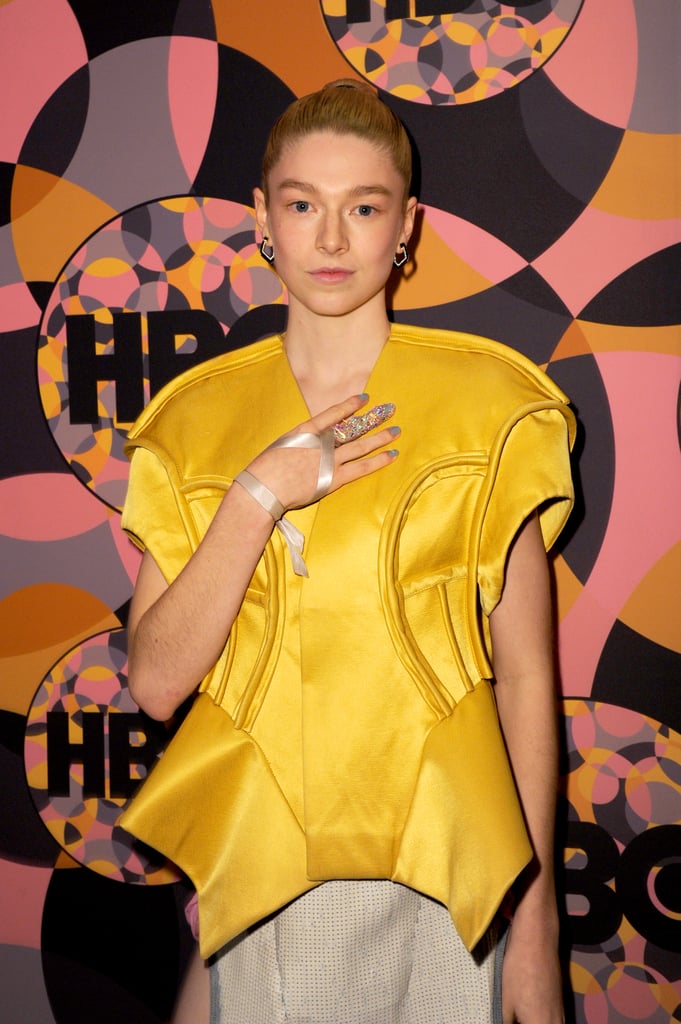 OK, that may be a tad dramatic, and I'm still very much alive and breathing, but Hunter did hypothetically, singlehandedly — nay, singlefingeredly — slay me when she rolled up to a Golden Globes postshow shindig with her Euphoria costars. Though her slitted sequin skirt and structural yellow jacket — two pieces from Rick Owens' Spring/Summer 2020 collection — initially caught my eye, the way she accessorised the futuristic outfit made me believe she's out here living in 2050.

Related:
Every Stunning Red Carpet Look From the 2020 Golden Globes

Rather than wearing flashy rings, Hunter had one entire middle finger bedazzled before the postshow festivities. Makeup artist Sandy Ganzer hand-glued tons of sparkly Swarovski crystals to Hunter's finger and tied a beige ribbon around her hand and wrist to really up the statement-making factor. Sure, it sounds a bit out-there, but it looked too freakin' cool, and Hunter was clearly psyched to show it off on the red carpet.

Honestly, I wouldn't even mind if Hunter flipped me the bird with her blinged-out middle finger. In fact, I actually want her to in hopes that it'll bestow some sort of magical powers on me. For now, I'll have to settle for admiring all the photos of Hunter's gloriously shiny finger and straight-off-the-runway afterparty outfit ahead. All in favour of "fingazzling" being the newest accessories trend of 2020, please say "aye!"