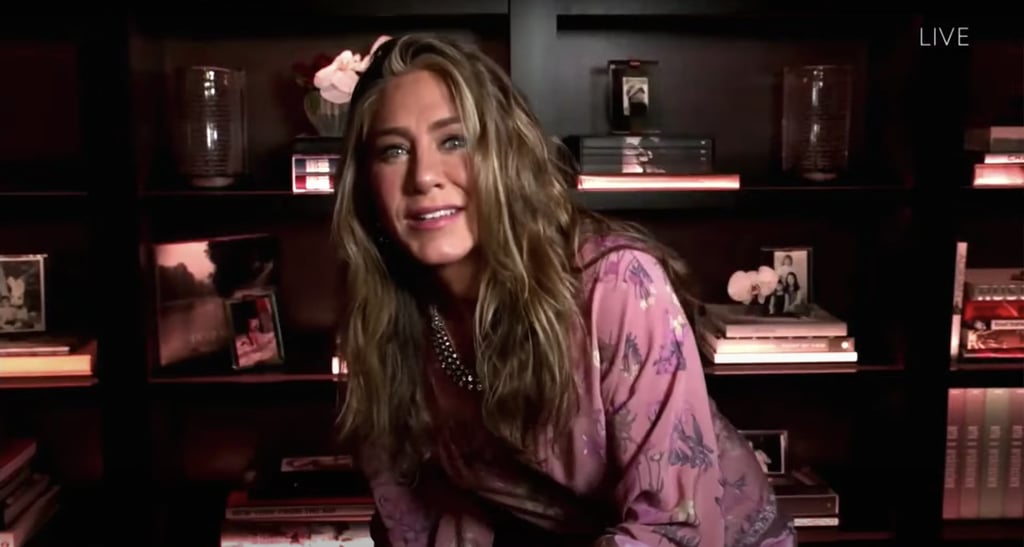 Getting glammed up is fun and all, but I have to say there's nothing better than cosying up in your favourite loungewear — and apparently, Jennifer Aniston agrees. While she kicked off the 2020 Emmys wearing a sleek black dress with a statement diamond necklace, for her second look of the night, Jennifer changed into a silky floral robe as she was joined by her former Friends costars Courteney Cox and Lisa Kudrow in an impromptu reunion.

The Morning Show star, who was nominated for outstanding lead actress in a drama series, had actually rushed home after she opened the virtual Emmys with host Jimmy Kimmel and "barely made it" in time for her category. With her hair and makeup still intact, Jen simply slipped into a pink satin robe adorned with flowers while wearing the same diamond jewellery she had on earlier in the night. Though the star's black dress with a ruffled hemline was beyond chic, her chosen loungewear was just as glamorous. Get a closer look at Jen's second Emmys ensemble ahead.

Celebrity Style
Ariana Grande's Outfits in "Positions" Are the Perfect Mix of Sexy, Sassy, and Sophisticated
by Nikita Charuza 2 hours ago

Fashion Trends
Storm Reid Loves Her Cherry-Red Pantsuit So Much, She Put on Beyoncé to Mark the Occasion
by Chanel Vargas 5 days ago
Latest Fashion
×