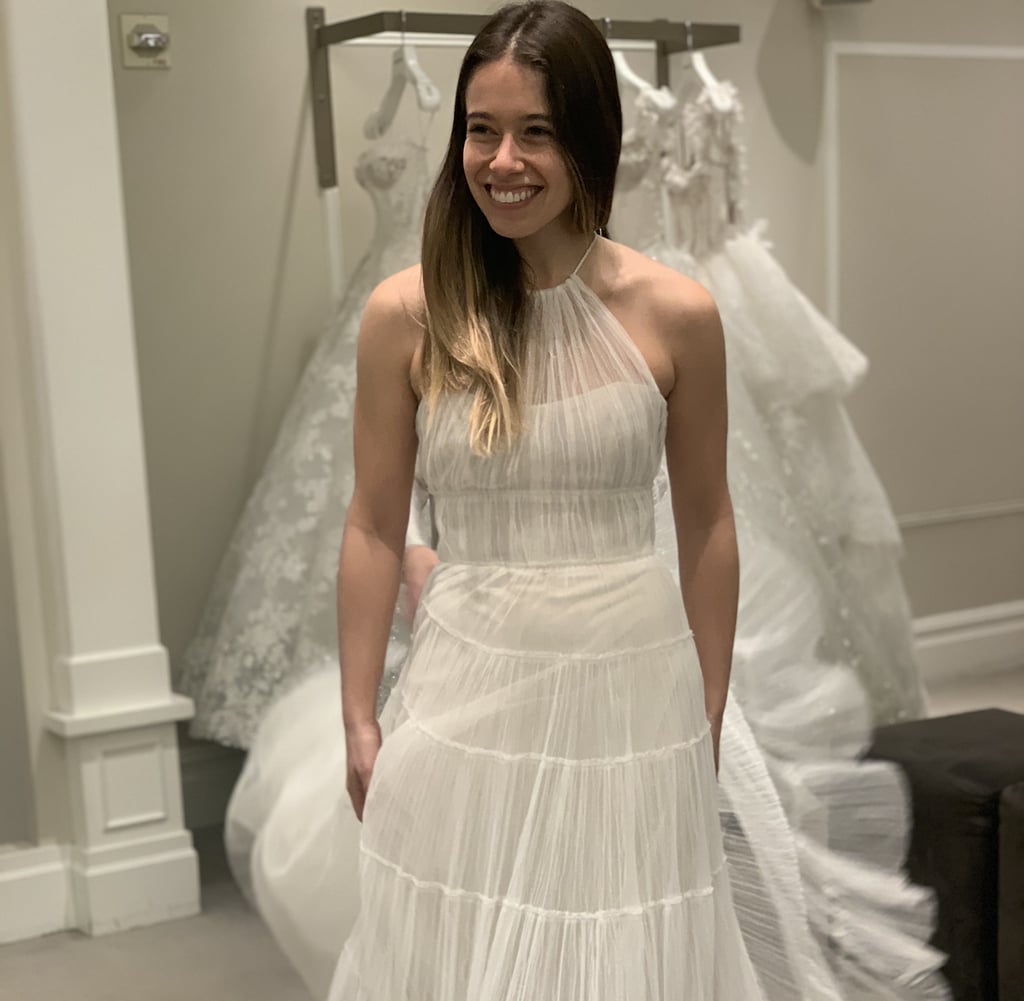 After trying on wedding dresses at Carolina Herrera, where the gown I fell in love with and set my heart on practically swallowed me whole (too much fabric, too little person), I was disheartened. I hit up a few more bridal boutiques and chose a wedding date somewhere in between, but would I walk down the aisle naked? I mean, it sure looked like it. My kind-hearted, caring, always-optimistic future mother-in-law had a request: could we go to Kleinfeld? Yes, that Kleinfeld — the one where they film TLC's Say Yes to the Dress. We live in the New York area, so I didn't see why not. As in, yes we could, but would I ever actually book an appointment?

Having watched a few episodes of SYTTD in my lifetime, I was curious about what the whole experience would be like. Would it be fancy-shmancy inside the bridal boutique? Would it be superloud, with brides-to-be, stylists, and maid of honours fussing all over the place? How many girls would say yes to the dress while I was in the store, and furthermore, would they get glasses of champagne delivered if they said yes at 9 a.m? Because that's what time my appointment was at — 9 a.m. So yes, BTW, I did make that appointment.

When I walked into Kleinfeld with my mother-in-law, her sister, and my future brother-in-law's girlfriend, I was overwhelmed. Dang, it was really fancy in there. 15 minutes after we entered, the lobby was packed with excited brides and their families waiting to be assigned to a stylist (we'll get to how that works later). It quickly became obvious which customers were fans of SYTTD, because they pointed out and took photos with the stylists whose segments are televised most often.

I found myself a) tired and b) thirsty, as I picked up a Kleinfeld branded water bottle from a table near the threshold of the bridal room floor. I peeked over the mannequins wearing the latest from Pronovias, Hayley Paige, and Pnina Tornai, trying to figure out how this whole system worked, and whether or not I'd get to browse through the racks myself. The fashion editor in me began writing a post in her head: "I Got Trampled By Brides-to-Be at Kleinfeld Trying to Find a Wedding Dress." Seriously, how were all these people going to shop in here at the same time?

Related:
I Went to Bridal Week With a Celebrity Stylist, and Now I Know How to Find My Wedding Dress

The boutique wasn't small by any means, but it appeared to be extremely organised, and there were mirrors facing "stations," if you will, spread out from wall to wall, each one separated by a couch for the bride's guests. The gowns hung on metal supports that lined the walls, each one spaced efficiently for stylists who knew the stock well and could easily recognise a dress by its details. I felt unprepared to step into the well-oiled machine that was before me — this coming from a girl who starts half marathon trail runs outside in the cold at 6:30 a.m. Yes, believe it or not, trying on wedding dresses is more daunting than that.

Eventually, I was greeted by bridal consultant Antonella, who has made many appearances on Say Yes to the Dress. That felt pretty neat! Antonella calmed my nerves as she brought me directly back to my fitting room and handed me a silk robe, introducing herself as my personal stylist and quizzing me about my bridal likes and dislikes. Naturally, I just showed her my Pinterest board, because that's an easy answer to everything, right? She left, and minutes later returned with an intern (yes, you can be a Kleinfeld intern!), plus three gowns.

The next 90 minutes flew by at a speedy pace, so I don't think I was far off at all by comparing this experience to a marathon. While I didn't find a dress, I learned a lot about what it's like to shop at Kleinfeld and gathered a bunch of interesting facts to share with you. By the end of it all, I had made new friends and developed a newfound appreciation for consultants like Antonella, who do a lot to make women from all over the world feel beautiful when they fly into New York just to visit Kleinfeld. Now I understand why so many people end up choosing The One at Kleinfeld. I myself did not say yes to the dress, but at least I said yes to the store, and I'm really glad I did. 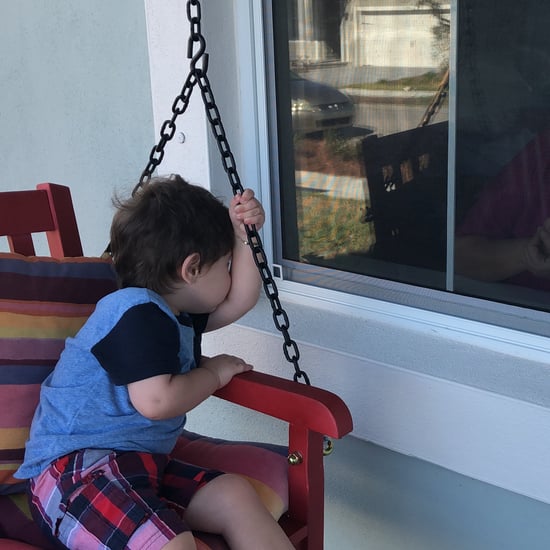 Family Life
I Moved Into My Parents' Home to Self-Isolate, but We're Quarantined Separately
by Charisandra Perez 8 hours ago

TV
The Punk'd Revival Trailer Is Here, and It Looks Like Ashton Taught Chance the Rapper Well
by Chanel Vargas 9 hours ago 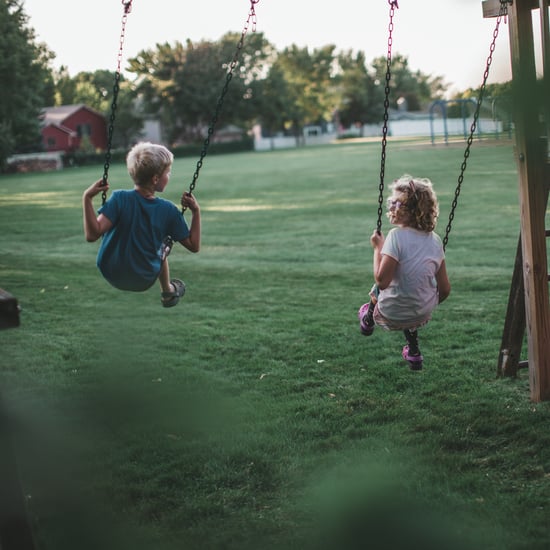 Family Relationships
My Brother and I Were Separated In Our Teens, and It Nearly Ruined Our Relationship
by Olivia Smith 9 hours ago

Pet Adoption
I Took This Time to Adopt a Kitten, and It's the Best Decision I've Made in a While
by Krista Jones 10 hours ago

Sweatpants
What Does It Mean to Dress Comfortably?
by India Yaffe 16 hours ago 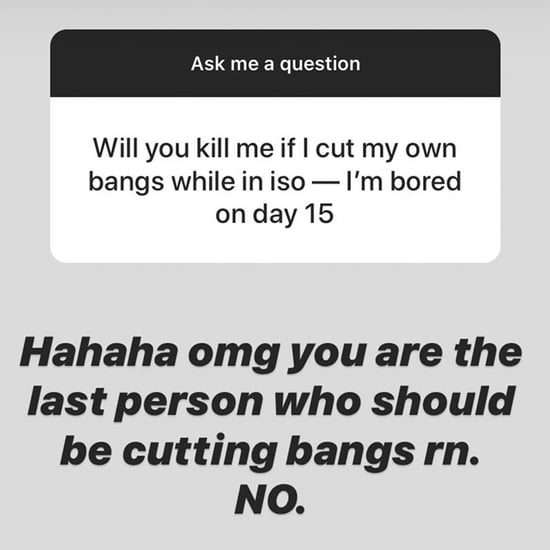 Emotional and Mental Health
Thoughts I'm Having: Why Do We Look For Things To Control When Things Feel So Uncontrollable?
by Bree-Grant 1 day ago
Latest Fashion
×