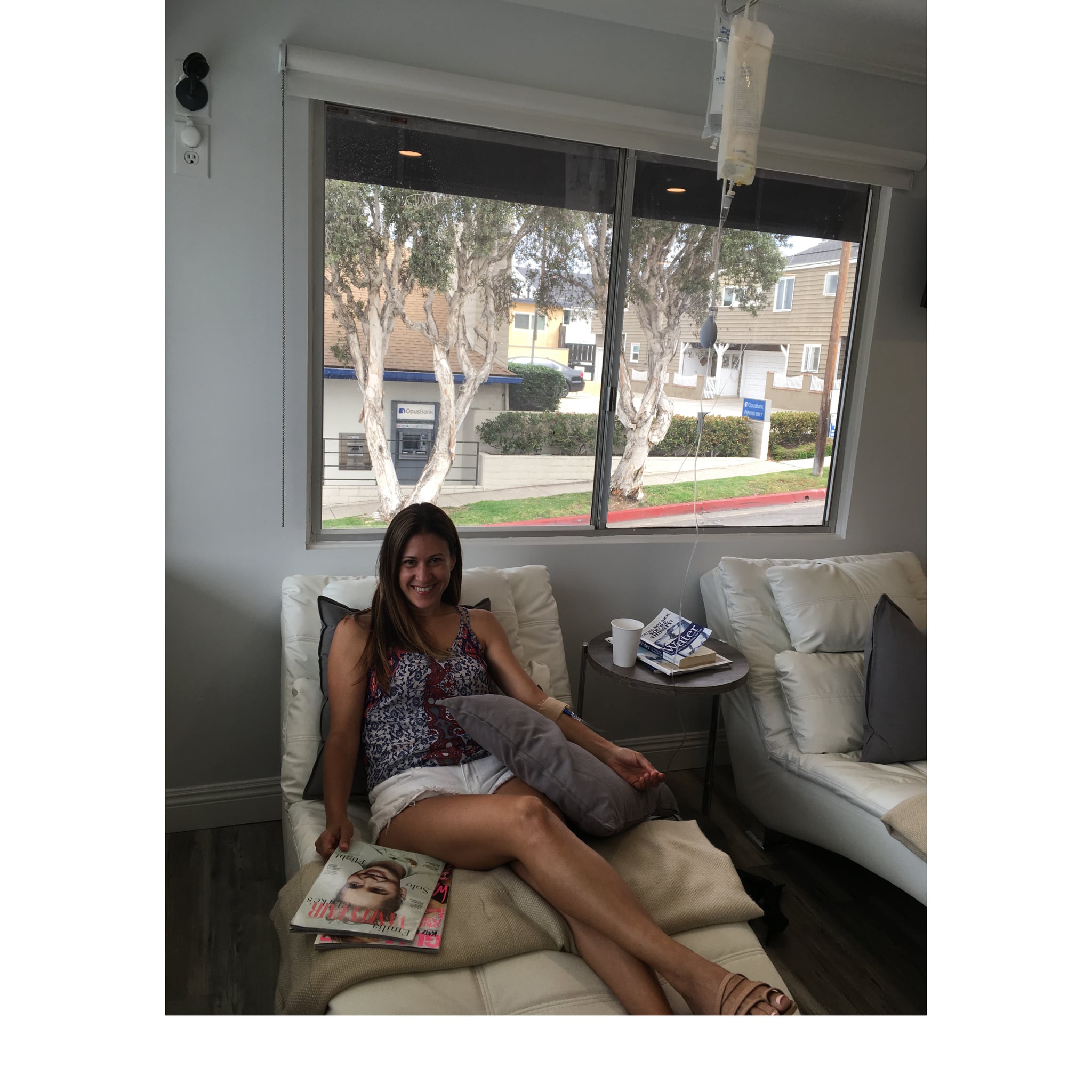 It's a well-known fact among my family and friends that I have a longstanding fear of needles. I don't just mean I get nervous before my annual trip to the doctor's office. I mean there have been several occasions when I've gotten so lightheaded from a shot that I've almost passed out on the office floor.

So it seems only natural that I would steer clear of needles whenever possible, right? Obviously, the answer is a resounding yes, with the exception of one fateful morning last week. A week prior, I had received an invitation to try The Hydration Room, a popular IV clinic in Orange County, CA, that boasts a loyal Hollywood fan base including Chrissy Teigen and Gwyneth Paltrow.

Initially, my gut instinct was to say, "Thanks, but no thanks." But curiosity got the better of me and I decided to just go for it. There's been a lot of hype in the media lately about the benefits of hydration therapy, including increased energy, mental clarity, and glowing skin. And who was I to pass up an opportunity to look and feel like Gwyneth Paltrow?

Related:
The Wildest Wellness Trends I Discovered at the Goop Health Summit

That said, there was one nagging question that kept holding me back. I couldn't stop asking myself, "What kind of lunatic splays their arm for a needle without actually being in dire need of medical care?" Apparently me. I'd been feeling especially run down for months now, thanks to an especially heavy workload, financial stress, and family responsibilities. So the promise of a quick fix that didn't require chugging caffeinated beverages by the gallon was too enticing to resist.

Upon my arrival at the Hydration Room, I was greeted by a friendly nurse named Tessa who reassured me that I would feel well-rested and rejuvenated after my first hydration treatment. After I finished signing a scary waiver, Tessa ushered me into a private room where she prepared a custom vitamin IV drip containing B12, Biotin, Vitamin C and Vitamin D.

To say I was apprehensive would be a massive understatement, but I somehow managed to sit back, shut my eyes tight and let her insert the needle. Surprisingly, I barely felt a thing when she pricked me. After I expressed my astonishment, Tessa let out a polite laugh before informing me that she gets that reaction a lot from new clients. Thankfully, once the worst was over, my sense of dread finally began to subside. Tessa led me across the room to a comfy leather lounge chair then offered me water or tea and a stack of magazines while I waited for the vitamins to work their magic. Twenty-five minutes later, I felt surprisingly serene like I had just had a glass of fine wine or an hour-long massage.

Related:
Wanna Sleep Like a Baby? This Trainer Says You Should Do These 3 Essential Stretches

To be honest, hydration therapy wasn't at all what I expected. Despite my initial nerves, I actually found the entire experience incredibly relaxing. Although the effects weren't immediately apparent (besides peeing five times in one hour!), I definitely felt more energized later that day. Rather than hitting my usual afternoon slump – where all hell breaks loose in the twilight hours before dinner – I felt revived enough to play for an hour outside with my kids, cook dinner, do the dishes, and meet a dreaded work deadline without breaking a sweat. The extra energy lasted for several days before eventually wearing off, but it was plenty of time to make me into a believer.

Would I recommend hydration therapy to a friend? Absolutely. Would I do it again? Tell Gwyneth I'll see her there.

Product Reviews
The Quest to Fit My Small-Band, Large-Cup Breasts: A 3-Week, 35-Bralette Journey
by Morgan Ashley Parker 22 hours ago