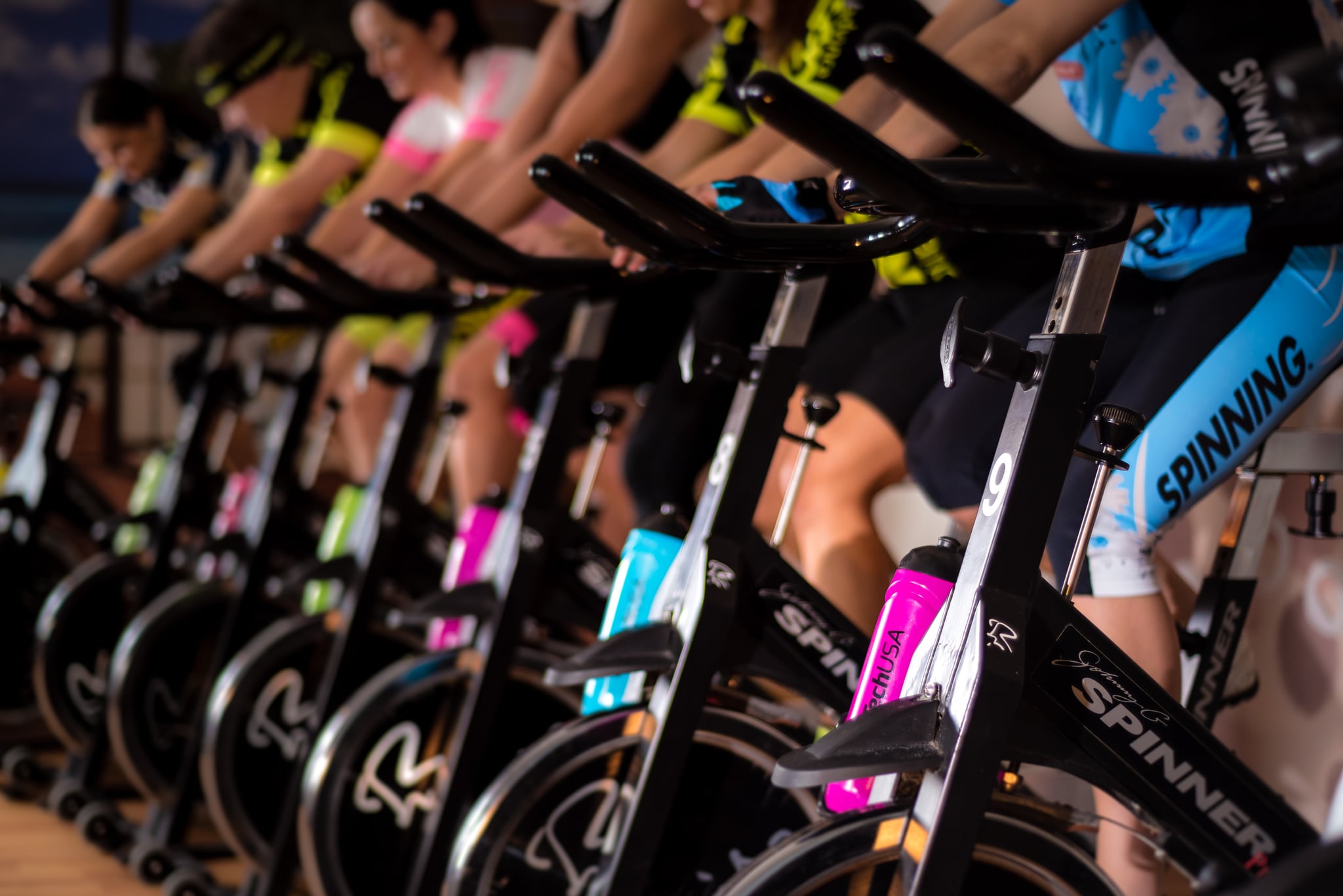 Spinning isn't your average bike ride around the park. Just ask anyone who's ever sweated their ass off while taking a class.

A workout that can be fairly described as both high-intensity and high-energy cardiovascular, Spin is a cycling exercise that involves a serious amount of leg movement, endurance, and plain old hard work — all while pedalLing on a stationary bike that mimics different types of terrain. If this is already sounding a little too intense for you but you're still dying to get legs as toned as Kayla Itsines's, there's good news. Spin is an effective way to strengthen and define the entire leg, making it worth your time (and uncontrollable sweat).

Quads and glutes are the leg muscles that benefit most during a Spin class. "Even though the whole leg is involved, the emphasis is placed on the quads and glutes," said Felicia Walker, Spin instructor at New York Health and Racquet Club. She explained how the three types of riding positions — seated, standing upright, and standing with arms extended — have a direct effect on both muscles. "Seated (first position) and standing upright (second position) both engage the quads," she said. "When you stand with arms extended to the end of the handle bars (third position), the glutes become the workhorse."

Related:
Did You Have a Crappy Indoor Cycling Class? This Is Why

Walker said it's all about balancing repetition and resistance — the two main elements to focus on while you're Spinning and the key to achieving those toned and muscular legs you're looking for. "A lighter amount of resistance on the wheel of the bike, and more repetitions and speed, will tone the legs," she advised. "Heavier resistance and a slower place will strengthen the legs."

Those who are wary of Spin class might fear that there's not much time to take a break and rest, making it easy to overdo it — and easy to get sore and injured leg muscles. But Spin does rely on interval training to offer students a break, which strengthens the cardiovascular endurance and the body simultaneously. Out of all the interval drills Walker instructs in her Spin classes, she's found that "the most effective leg burner is when you can pedal fast with medium-to-heavy resistance for 30 to 45 seconds."

As useful as Spin can be for obtaining muscular legs, it's crucial to pair it with other strength-training and muscle-lengthening exercises for optimal results. Elit Kirschenbaum, indoor cycling instructor at Project Physique in Summit, NJ, has found that squats, lunges, and deadlifts — in addition to yoga and barre — are good options to couple with Spin if you want stronger legs. "Squats and deadlifts will focus more on glutes but will also impact hamstrings," Kirschenbaum said. "Lunges will focus more specifically on legs, and muscle-lengthening exercises such as yoga, barre, and Pilates are great for toning and lengthening but will also build muscle." The seasoned Spin expert also suggested combining Spin class and these additional workouts with a "consistent, healthy meal plan" to see a real change.

Both Spin instructors agreed that the effort it takes to complete a Spin class will definitely be rewarded and completely strengthen your legs — so long as you can commit to it at least three times a week. "Taking three to four Spin classes per week is optimal for building cardio endurance and strengthening and toning the legs to a point where visible results can be seen," Walker said. "The body adapts and becomes more efficient during class over time so that the legs can handle more resistance and so they can also turn faster." In other words, taking the easy way out won't cut it.

Workouts
Here's How Many Calories You'll Actually Burn Jumping Rope, According to Experts
by Brittany Natale 14 hours ago

Workouts
Missed a Couple Workouts? A Trainer Explains Why You Shouldn't Try to Make Up For It
by Kacie Main 5 days ago