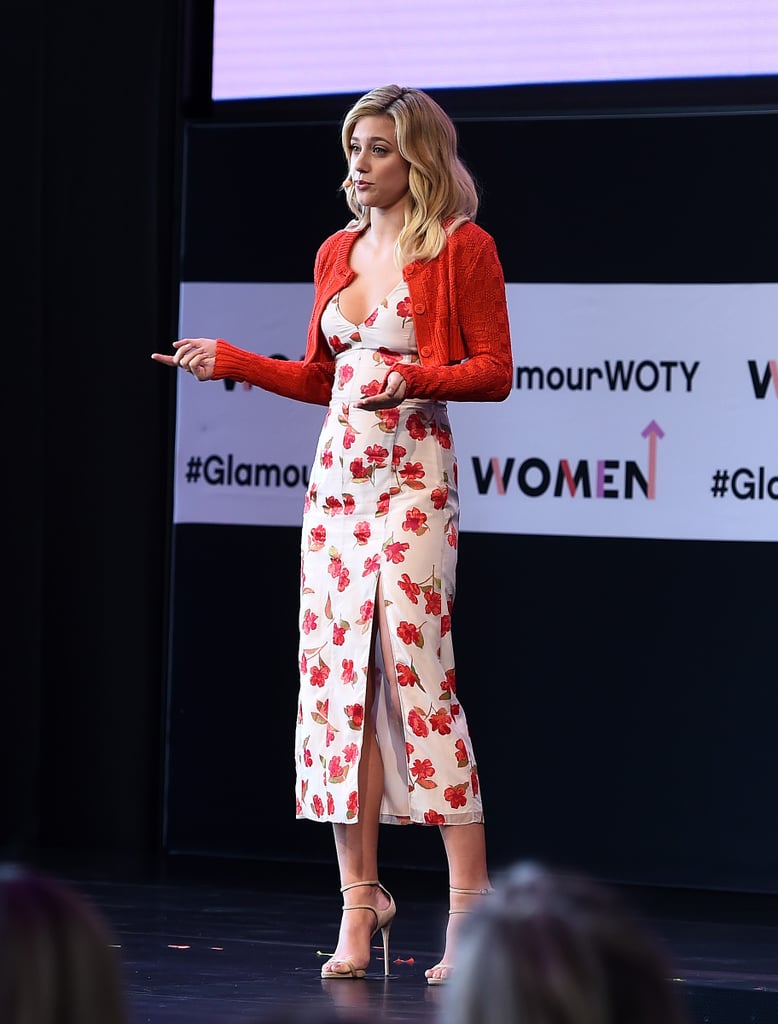 Lili Reinhart is no stranger to opening up about her struggles with body image and mental health, but her latest quotes about the subject matter just might be her most powerful yet. On Nov. 11, the Riverdale actress gave an empowering speech at Glamour's 2018 Women of the Year Summit, and it was jam-packed with reminders about the importance of self-love. "We exist in a world today where everything can be faked or fixed," Lili said while beginning her speech. "Noses can be changed, and stomachs can be tightened, and cellulite can be lasered away, apparently. Because that's what we are told to do, which is alter ourselves in order to be beautiful."

"I didn't think anything was wrong with my body until I was in an industry that rewards and praises people for having a smaller waist than I will ever have."

The 22-year-old star admitted that for the past year, she's dealt with backlash from people who claimed she "didn't have the right" to discuss being self-conscious about her body because she was thin. "I understand how it seems inappropriate for someone who is average size to talk about problems with weight gain. But, my point is, I didn't think anything was wrong with my body until I was in an industry that rewards and praises people for having a smaller waist than I will ever have," Lili said.

The result of these unrealistic industry standards? Lili became "hyper-aware" of her body's fluctuations, often examining herself in the mirror and feeling wary when her stomach looked different just hours apart. "I was thinking, was my reflection lying to me? How can my body look so different over the course of one day and why do I feel like I need to apologise to the world for my ever-changing self?" she said, adding that she didn't want her fans to think that she was "catfishing" them with her appearance.

"We aren't born with these insecurities. We are told to be insecure about certain things."

Lili then cast light on how the media tends to cause women's insecurities by portraying what they should and shouldn't look like. "From a young age, we are unknowingly being trained by magazines, marketing, and all forms of media into thinking that having cellulite or not wearing makeup is worthy of being publicly shamed," the actress said. "So there was no way in hell that as young women digesting this media, we weren't all going to try and hide those parts of ourselves from then on. We aren't born with these insecurities. We are told to be insecure about certain things. We are conditioned to feel ashamed or embarrassed about certain parts of ourselves." Ain't that the truth!

The solution to said body shaming isn't an easy one to come upon, Lili said, but she did add that "changing it ourselves" is possible if people vow to show "what's real with no filter and certainly no shame." She encouraged the women in the crowd to present both their "natural, vulnerable side" and their "glamorous, contoured side" on social media, striking a balance between the two to keep things more real.

Lili wrapped up her speech with some particularly empowering words that deserve their own damn billboard, or, at the very least, their own sticky note on your bedside table. "Do not set impossible goals of meeting those fake standards. It's unrealistic to think that your body or my body will ever look like anyone else's. That's not the way it's supposed to be," she said. "You can be naturally beautiful with acne or scars, cellulite or curves. So let's celebrate each other, and ourselves, as we are, as we will be, and as we were meant to be." Watch Lili's eight-minute speech below, and prepare to feel inspired.

Healthy Living
These Weighted Blankets Are on Major Sale Right Now, and Make For Great Gifts
by Krista Jones 11 hours ago

Healthy Living
Are Your Periods Irregular or Even Absent? Here's When You Should Talk to Your Doctor
by Abby Fritz 2 days ago

Healthy Living
When Can We Expect a COVID Vaccine? The CDC Estimates as Soon as Mid-December
by Chanel Vargas 3 days ago