You often hear new mums say one of the hardest things about their first pregnancy is the unknown. You don't know what's going on with your body, you have zero idea what's happening with your emotions, and each trimester brings new firsts that are simultaneously exciting and somewhat scary.

There's no doubt that growing a life inside of you is a beautiful thing, but it's not without its moments. Every woman's pregnancy journey is different, and each has their own struggles and celebrations that we don't often see from the outside.

As we found out when KIC founder and model Steph Claire Smith opened up on the podcast she co-hosts with Laura Henshaw, about falling pregnant after being diagnosed with PCOS (Polycystic Ovary Syndrome) and the very confronting realisation that with every pregnancy comes the possibility of miscarriage.

In the interview, Steph also talked about the cute way she told Josh they were pregnant, and the wild food cravings she's been having which you can read about here and here.

Related:
Steph Claire Smith on Her Pregnancy So Far, Including How She Found Out & the Moment She Told Josh

On Falling Pregnant After Being Diagnosed With PCOS:

"For my experience, and I know everyone is really, really different. I came off the pill and I was not on any kind of pill or anything and so I was expecting my period to come back and it was about a year and I still hadn't got my period. I ended up getting checked out and it turns out I had cysts on my ovaries and that was the reason I wasn't getting my period and I was starting to get all the other symptoms around it.

Steph went on to explain how lucky she was to be already living such a healthy lifestyle before being diagnosed as that's one of the ways you can help yourself and minimise the symptoms — eating a nice balanced diet, staying active and obviously working with your health professional.

She also added that she tried alternative methods when it came to getting her period back. "The other thing I researched and that I decided to go down the path of was acupuncture. For me, it was something that really helped, whether it was just the timing and everything else I was doing alongside it that helped, but I got my period back."

"So I just started to feel like 'omg, something's not right with me down there', 'am I going to be able to get pregnant in the future'. I mean what I know from PCOS, the research I'd done and the people I'd spoken to, obviously if you're not ovulating and you haven't got your period it can make it harder, doesn't mean you can't get pregnant, but it can make that a little bit harder."

Steph finished up by explaining that even after she got her period back, sometimes the fear still creeps into the back of your mind.

"So yeah I was just so keen to get it back. So once I got my period back I was so happy and it started to come back super regular and for the last couple of years, it's been almost to the day regular. So I'm really grateful and fortunate. Even knowing that and that technically I should be in a good place, it's definitely still in the back of your mind when you start trying, you know, 'are we actually that fertile?' like because we've never tried this before. We've spent our whole relationship trying not to get pregnant, like how are we going to go now that we're trying? So I think that's why we decided to start when we did because we were both in a position where if it happened straight away amazing, and if it took a while that's fine, too."

On the Lingering Fear of a Miscarriage:

Another real fear that comes along with pregnancy is the fear of miscarrying, especially in the first trimester. And while it is super common, it's not very wildly spoken about. So Steph chose to spoke about her fears in the hopes of opening up the dialogue further and normalising the conversation.

"I think the underlining thing that I noticed in the first trimester was this weird energy between josh and I where, obviously when we found out we were over the moon excited, happy, this is the most amazing thing ever, and then we went through this period where you know, even with my first GP appointment, she reminded me that one-in-four women miscarry and I was like 'Oh yeah, I know that we've spoken to people about that', and I was quite educated on that, how could I forget that."

"Hearing it kind of put so bluntly, I was like "Mm ok" and then that just sat in the back of my head literally through the whole trimester. You know the baby's not here yet so there's still obviously always the chance of something going wrong, but there's definitely a higher chance in the first trimester, so it was a weird time because we were both really excited but we were also in some way holding back our excitement because we were both a little bit nervous about something like that happening," she said.

Adding: "It was really exciting, but it was also terrifying at the same time particularly in the earliest stages."

When went on to talk about the moment where she felt that fear lift after her eight and 13-week scans. "There was a little bit of a moment at eight weeks where I met my obstetrician and she did a scan and we heard the heartbeat and that was really amazing. That for me was reassuring, but I still knew there was a month to go in the first trimester, but it did help a little bit. Coming up to the 13-week scan it was really scary because I knew how big of a deal it was, and I knew we hadn't heard the baby's heartbeat and you know it's so small so you can't feel anything yet, it's not like I could feel it kicking and we knew it was moving. So I think that's why we were still nervous by the 13-week scan."

"I got a sense of relief when he played the heartbeat and I just started crying in the appointment because it was just like 'omg, it's moving, it's got a heartbeat', and he did all the checks they do to make sure that all its kidneys and all its different vital organs are developing well and size-wise it's growing well and all that sort of stuff. It was really beautiful, it ended up being a really beautiful appointment. That's definitely when I started to breathe a little bit and enjoy it a lot more. It definitely felt a lot more real from that point."

We've gotta say, it's really refreshing to hear Steph talks so candidly about her pregnancy journey and not shy away from what are traditionally 'taboo' topics. More of this, please!

Skin Care
Keke Palmer's Latest Selfie Comes With a Message About Acne and PCOS: "You're Not Alone"
by Danielle Jackson 3 days ago

Pregnancy
What You Need to Know About Getting a Tattoo While TTC, Pregnant, and Breastfeeding
by Melissa Willets 6 days ago

Pregnancy
I Saw a Pelvic-Floor Physiotherapist After Giving Birth, and It Made a Huge Difference
by Brittany Van Den Brink 3 weeks ago 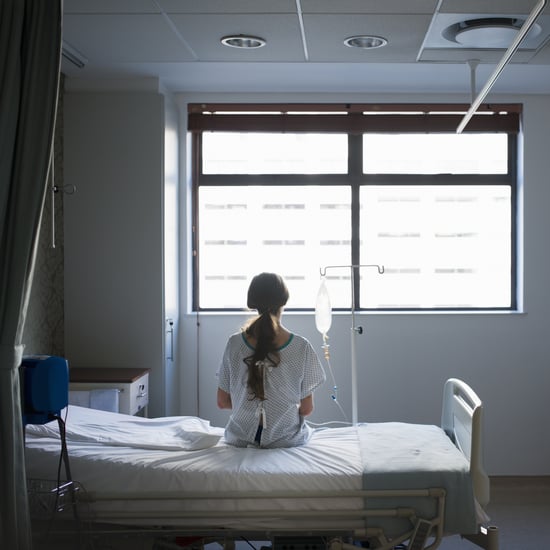