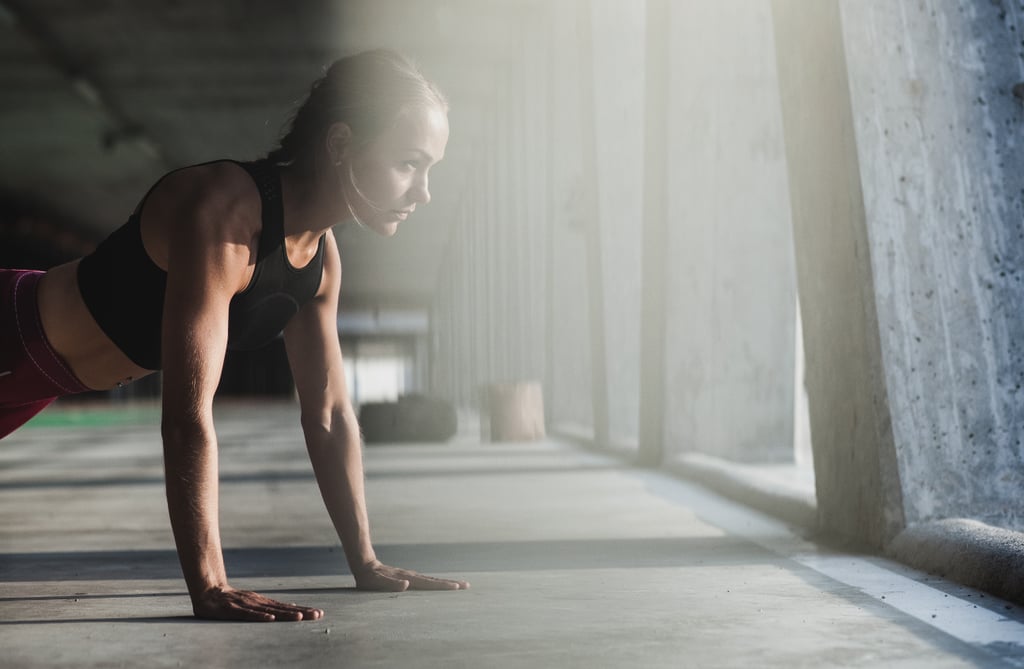 Put simply, compound exercises are moves that recruit large muscle groups and use multiple joints. "You're activating several muscles or muscle groups at one time," Brooke Taylor, NASM- and ACE-certified personal trainer, who also has specialties in pre- and postnatal fitness, told POPSUGAR. She said they work various ranges of motion and incorporate level changes as well. "Whereas, if you're sitting down at a machine and you're doing leg lifts or something like that, you're isolating one muscle group," she explained.

Compound exercises can use body weight or resistance. They can be as basic as an air squat or push-up, or they can be more advanced like a squat to burpee push-up and press, Brooke noted. So, it's doing one exercise that works multiple muscle groups at the same time, like a push-up, or it's "taking two or three [or more!] different exercises and putting it into one big one," Brooke said simply. But, you have to ensure that the more components there are, the more you focus on keeping correct form (which we'll talk about later).

Meg Marot, NASM-certified personal trainer, told POPSUGAR that barbell squats, split squats, deadlifts, squat to overhead press, and bench press are other examples of compound exercises. On the other hand, bicep curls themselves, for instance, are considered more of an isolated move. But, added onto a move like a lunge, that whole exercise — lunge to bicep curl — would be a compound exercise.

Brooke said that she particularly likes compound exercises because they elevate the heart rate and are based on functional training, meaning they "simulate everyday movements," she explained. "It gets the client off the machines and works stability, strength, and muscular endurance." Compound exercises also help you avoid plateaus in your progress, she said, since there's a potential to keep adding weight or additional components to make them more challenging.

For instance, take the squat example we used before: a squat is considered a compound exercise because it works, among other muscles, the quads, glutes, hamstrings, and core. You could add a row to this move, and tacking on extra elements — or "layering," as Brooke called it — shocks the muscles. Plus, both Brooke and Meg said this makes workouts more interesting.

"A lot of times you're working in different vascular systems . . . you're working in both an aerobic and anaerobic threshold," Brooke told POPSUGAR. "You're getting your heart rate elevated a lot higher than you would if you were just doing straight cardio." But, at the same time, it's interval training, Brooke said. What's more, elevating your heart rate and strengthening large muscle groups will burn more calories and, in addition, burn more fat.

Meg, who said that compound exercises are great for core stability, also said that she typically advises her clients to do these moves at the start of a workout — after a warmup, of course — because that's when they have "the most gas in the tank." If you're only just starting to incorporate compound exercises into your routine, you're building up to more reps, or you're adding on components to the moves you already do, Meg, like Brooke, wants you to pay close attention to form. You can, she said, ask a personal trainer at the gym, and "make sure that the form correction you're getting is from a certified professional, too, not just something you see on social media."

As compound exercises become more complicated, Brooke advised that you progress slowly, simply because this is where form can drop. Make sure that you have the basic movement patterns down first. One compound exercise she's referring to is a burpee pushup, bicep curl, to overhead press (you can add rows to this, too). Similarly, if you're doing lunges, make sure you're able to do them with proper form as well as proper knee and toe alignment, she said. Then, you can layer on other elements like bicep curls or overhead presses.

Ahead, check out some of the moves that Brooke and Meg discussed here, along with other compound exercises to try. Burn calories, build up strength, and get to work!

Healthy Living
I Started Stretching For 10 Minutes Every Morning, and It Changed How I Tackle My Day
by Caitlin Johnston 4 days ago
Latest Health & Fitness
×