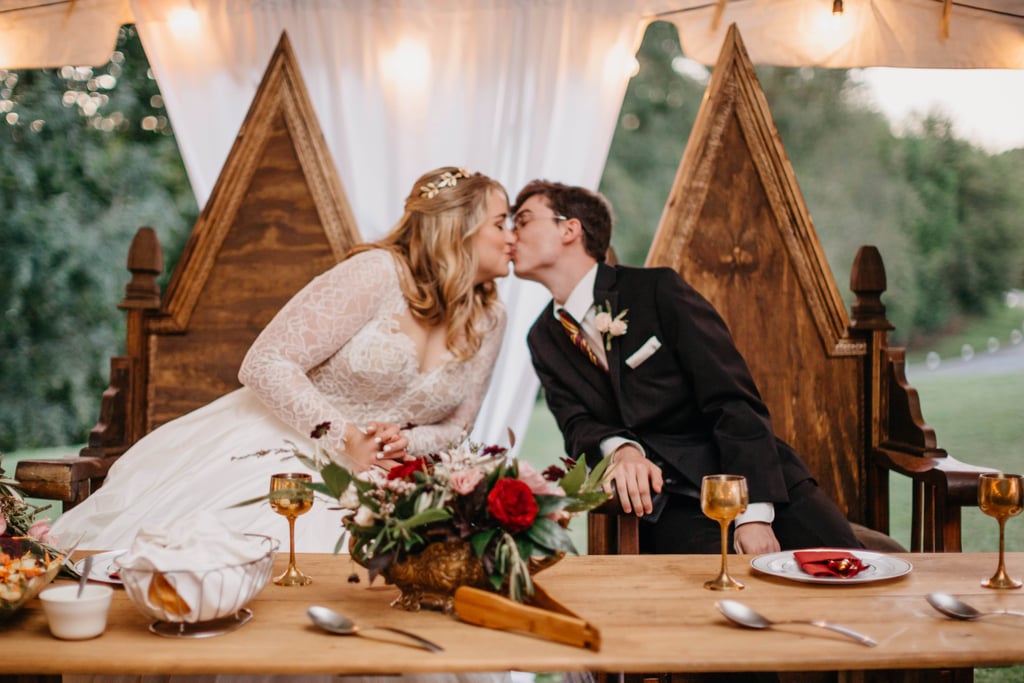 What Katelyn thought was a girls' trip to The Wizarding World of Harry Potter ended up being the surprise of a lifetime. Turns out that Taylor was waiting in an empty compartment of the Hogwarts Express in Universal Orlando for them to board with the help of staff. Katelyn had always been a big fan of the series, which is why he thought it'd be the perfect place to pop the question. "After that, we wanted to carry the magic of the moment into the big day as well," Katelyn told POPSUGAR.

Among the many amazing Harry Potter details found throughout their backyard wedding in Nashville, the ones handmade by family were the couple's favourites. The sweetheart Headmaster's chairs were made by the bride's cousins, along with the brooms with custom handles you'll see in the photos ahead. They also loved the mini cakes and floating candles over the reception tables, which were set up to look like the Great Hall. But one of the most standout decor pieces that we most adored was the wall of moving pictures. Instead of a traditional photo booth, guests were able to stick their heads through portrait frames to replicate living photos from the series!

The bride and groom each had a favourite highlight from their wedding day. For Taylor, it was the hilarious dance he had with Katelyn's cousin that wasn't planned. "For me, it was watching people take in the details, because it was obvious who else was a fan and who thought we must be a little crazy," Katelyn said. "The best part was the kids who took in the whole thing as magical, if they knew it was Harry Potter or not, just because it was a different world to them."

See their wedding in full!

Movies
TikTok Is Crushing on Draco Malfoy, and Tom Felton Is Out There Somewhere Blushing
by Alyssa Grabinski 4 weeks ago