The Surprising App That Helped My Relationship . . . and Sanity

I can say confidently, without any shame, that I'm a fairly emotional person. I cry at wedding photos, stories about acts of kindness and ads with babies/puppies/people achieving their dreams in them. At certain times of the month, that glimmer of a tear in my eye at seeing someone reunite with a loved one on TV turns into full-blown sobbing on the bus, because I've just remembered that Fred Weasley is dead.

Conversely, these emotions can sometimes take me to the dark side. Last month I become seriously mad when I got home and my partner told me that he hadn't eaten dinner yet — it was 9:30 p.m., how dare he not have eaten yet! HOW DARE HE! Don't get it? Yeah, me neither, but at the time I felt as if he'd just murdered something. I was disgusted.

It's shortly after these outbursts of irrational irritation that I'll get my period. Something I'll reluctantly admit to my partner and he'll knowingly sigh. He won't say it, but I think he's just relieved that I'm not that crazy.

It feels a bit anti-woman to admit PMS may be the cause of some female rage, but the fact is, hormones make you do crazy things. The problem is, I've never been good at dates or tracking my period. Even when I was on the Pill I'd be popping from several packets each month (I lose things), so I'd never really know where I was up to. Hence, I never knew when the bad mood would strike.

Being bad at keeping track of my cycle caused me other problems too. I'd be hit with an aching body, bad headache or dizzy spell and think I was dying. It would of course cross my mind that it might be the beginnings of my period, but I was never sure. And yes, I have been to the doctor before, insisting I was coming down with something, only to get my period that afternoon. *Sigh*

The thing about periods and their pesky symptoms, is that they are ever changing, and it's hard to know what's affecting what. At the suggestion of a friend (who, like you may be now, thought I was a bit hopeless) I downloaded the app Clue. Clue is the first period and fertility tracker I've seen that doesn't look aesthetically offensive on my iPhone's home screen. It's not pink, purple or flowery, but instead, clean, simple and smart. Don't get me wrong, I'm not against "girly" apps, I just personally don't understand what a flower has to do with my monthly need to buy tampons.

After initially downloading Clue and entering my first period (you do your first entry on the first day of your period), I sort of forgot about it until a month later, when my partner shut the car door a little harder than usual and I wanted to rip his head off. I got a notification on my phone that read, "Clue: Just letting you know, your PMS is coming up." I paused, bought myself some chocolate on the way home, and my SO's head remained intact.

In month two I started using Clue a lot more. The app tracks not just your period and ovulation, but you can adjust it to include your skin, hair, pain, mood, sexual activity, sleep, energy, cravings, mind-set and more! It uses an algorithm to calculate and predict your own unique cycle. And the more you use it (and make entries on more days than just when you have your period), the more accurate it gets. And the graphics are excellent. Had sex? Tap the lounging man. Had protected sex? Tap the lounging man wearing a tie. LOL!

It's a simple thing to do, but using Clue has relieved a lot of unnecessary anxiety. Anxiety around my health (mental and physical), emotions and my relationship. I wouldn't be surprised if my SO downloads it to his own phone to keep track of me. At least he'll know when to be particularly gentle with the car doors.

Scroll for a look at the app itself, then download it for iPhone and Android.

Healthy Living
There's a Global Movement to End Period Poverty, and Young Women Are Leading the Way
by Mara Santilli 2 days ago 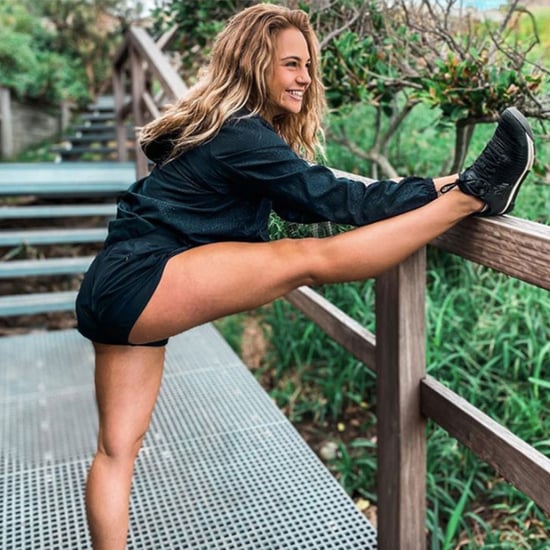