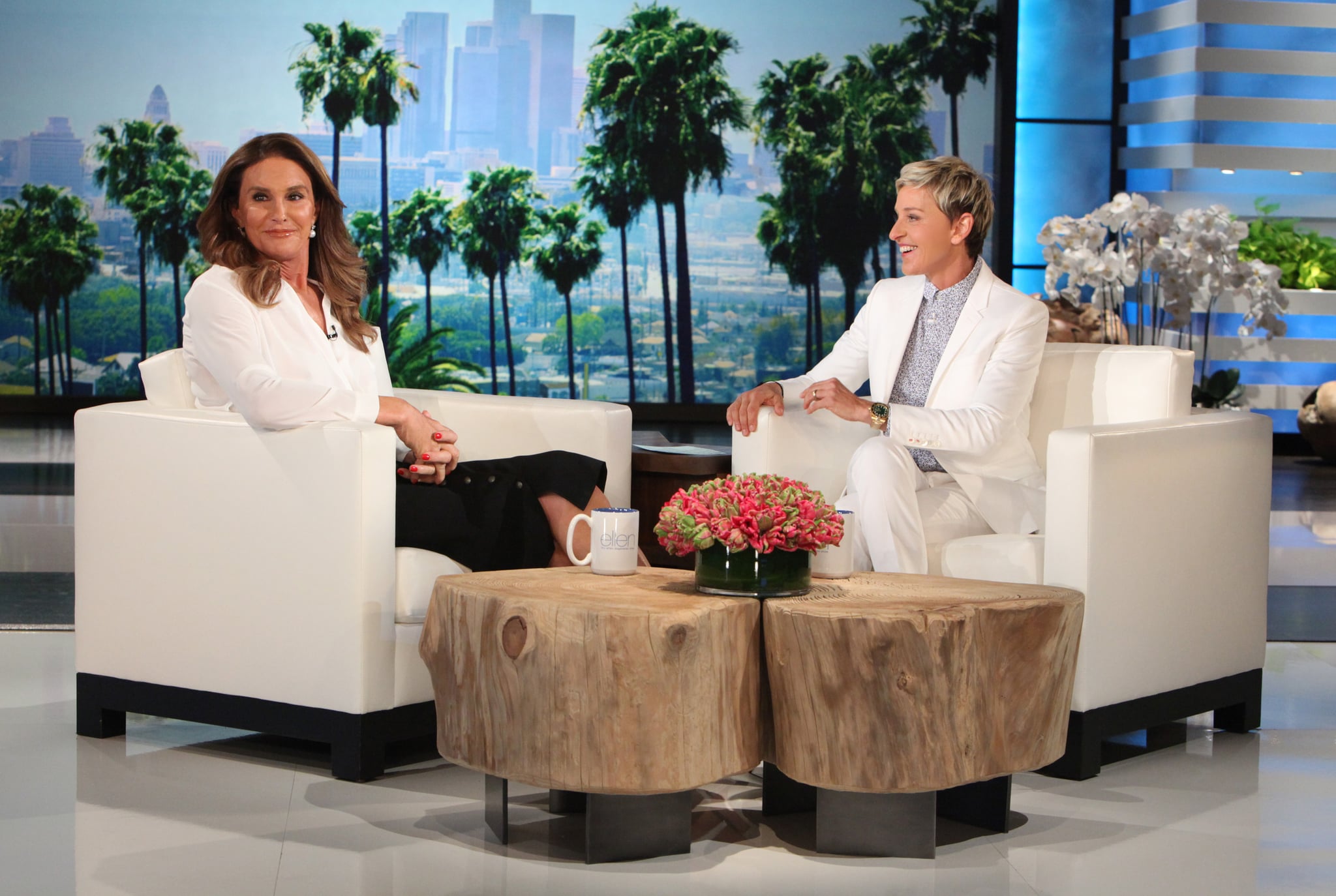 I was 20 when I came out as a lesbian, and although I knew for sure that was the best way to describe my identity, I had absolutely no clue how to be a lesbian (aside from the obvious). My acknowledgment of my sexuality didn't come with a guidebook or handy pamphlet with statistics, data, and a historical timeline for me to study or memorize. I didn't even know any other gay women. It took time, and a few gender studies courses, but I eventually figured out who I was and how I fit into the greater LGBT community. I'm proud to be associated with this group of people, who share the same pride and have all gone through their own individual journeys. But the thing is, LGBT people are imperfect humans. Not because of our sexual or gender identities, but because we are people.

Earlier this week, Caitlyn Jenner appeared on The Ellen DeGeneres Show and struck nerves when Ellen asked about her views on equal marriage: "I remember 15 years ago, 20 years ago whenever it was when the whole gay marriage issue came up – at first I was not for it," Caitlyn said. "I kind of like tradition and it's always been a man and a woman. And I'm thinking I don't quite get it. But as time has gone on, I think like a lot of people on this issue have really changed their thinking here, to, I don't ever want to stand in front of anybody's happiness. That's not my job. If that word 'marriage' is really, really that important to you, I can go with it."

Essentially, Caitlyn said she is on board with equal marriage, but the way she framed her response showed some hesitation — which Ellen pointed out, as did many viewers. I was disappointed, but I also had to remind myself that Caitlyn isn't coming into the queer community with a lifetime of going to gay clubs and drag shows. (In an I Am Cait episode, she is anxious and not at all thrilled about a trip to LA's famous gay bar, The Abbey.) She hasn't lived as part of the community until now. Her life, up until her transition, has been pretty damn straight. Now that she's part of the community, though, we have more expectations for her, and it begins with consciousness.

Whenever a public figure comes out and joins the LGBT club, there's a little apprehension from the longtime members. That person inevitably becomes a mouthpiece in the media who is often asked to represent our views on subjects they are new to exploring and learning about themselves.

To say Caitlyn Jenner's transition has received a lot of attention would be an understatement. From her Diane Sawyer sit-down to her Vanity Fair cover story to her E! television series, the media and public alike are fascinated by the journey she's made from Olympian to reality star to transgender icon. At 65, she's made a huge life change that she's been longing for since she was a child. LGBT people understand this plight better than most — other trans people, for certain — but millions of people in the general public are learning truths about trans people for the first time. And so is Caitlyn.

No one comes into a new identity fully prepared. It's impossible to instantly become part of a community when you've spent a lifetime isolating and hiding yourself from even those who know you best. At 20, coming out was intense and scary for me. At 65, and as a world-famous person, it has to be considerably terrifying.

But we're past that point for Caitlyn now. She's come out and done what so many see as brave, trailblazing, and worthy of praise. (For the record, I'm of that mind.) But because of the power she yields as a household name, the ideas she professes publicly directly affect the community she's part of, and she's been both a divisive and unifying figure because of it. On one hand, her very existence has helped trans visibility reach an all-time high and encouraged discussions on what it means to be a trans woman; including the tragic reality that trans women, especially those of colour, are being murdered at historic rates.

But Caitlyn's place of privilege — her being affluent, white, and famous — has also been problematic. Some view her as naive and uncaring when it comes to the larger trans population, who struggle with basic things like familial acceptance, securing jobs, and places to live. Despite her reaching out to trans women and youth on her show, there has also been criticism of the amount of time dedicated to focusing on Caitlyn's love life (or lack thereof). Caitlyn is an executive producer, so it seems she should take some responsibility for the finished product and the lack of worthy discussion on trans issues.

Another part of Caitlyn's identity that doesn't sit well with much of the community is her conservatism. A dedicated Republican, Caitlyn's political interests often seem at odds with her personal ones. Caitlyn's conversation with Ellen, the world's most famous married lesbian, furthered the ire some LGBT folks already had when it came to Caitlyn's representation of an oft-misunderstood minority. Perhaps it stung most because, despite our still very fresh win from the US Supreme Court over the last few months, we still have county clerks who refuse to issue our marriage licenses using "traditional" marriage as a defense. To have someone we want to support and claim as one of our own decline to stand in solidarity on an issue so important is frustrating. The instant worry is that we're being infiltrated; we're being attacked again, and by someone we thought was one of us.

To her credit, Caitlyn recently wrote a blog to explain that she has since spoken with gay friends and decided "everyone should be able to marry the person they love." She's learning; she's growing; she's changing in front of everyone. But sadly, more people saw the Ellen interview than have read that blog post, and the takeaway will be: Caitlyn Jenner doesn't support gay marriage.

The sad truth is that even as a community, LGBT people are not always the best and most well-informed allies we can be to the other letters in our own acronym. There are still many gay and lesbians who will tell you they don't think bisexuals exist; or LGBs who are transphobic. There are gay men who are misogynists, and trans people who don't want anything to do with the fight for queer causes outside of their own. We are an imperfect group of people, but we work best when we're putting our difference aside and working together. That's when change is accomplished.

It's unfair to put the pressure of representing a diverse group of millions of people on any one person, much less someone who's only just begun to experience life as that person. I shudder to think what I would have said or done with a spotlight on me during those formative years, and am grateful — as I'm sure most other LGBT people are — that wasn't my reality. Caitlyn has faced and will face a lot of scrutiny. But if she continues to be as open to the new experiences and education her peers can offer, she'll reflect what she's learned onto the world at large, and that can only be a good thing.

Trish Bendix is a writer and editor in Los Angeles and is currently editor in chief of AfterEllen.com. Trish's work has been published in The Hollywood Reporter, Cosmopolitan, Slate, The Village Voice, Time Out Chicago, Out, Punk Planet, Bitch, The Frisky, AlterNet, and The Huffington Post. Her fiction has appeared in The Q Review and CellStories and she has essays in the 2010 Seal Press anthology, Dear John, I Love Jane, More Than Marriage (Ooligan Press), and Opposing Viewpoints: Celebrity Culture (Layman Poupard Publishing).

Trish is the winner of the 2015 Sarah Pettit Memorial Award for the LGBT journalist of the year from the National Lesbian and Gay Journalist Association. She is also a board member of the Gay and Lesbian Entertainment Critics Association, and a member of the Television Critics Association as well as the National Lesbian and Gay Journalists Association. She's spoken on panels at SXSW, Q-Me Con, BlogHer, and Creating Change and to classes at University of Western Washington and Columbia College Chicago.

black lives matter
Stock Photography Has A Diversity Problem, and You Already Know What It Is
by Natasha Marsh 6 hours ago