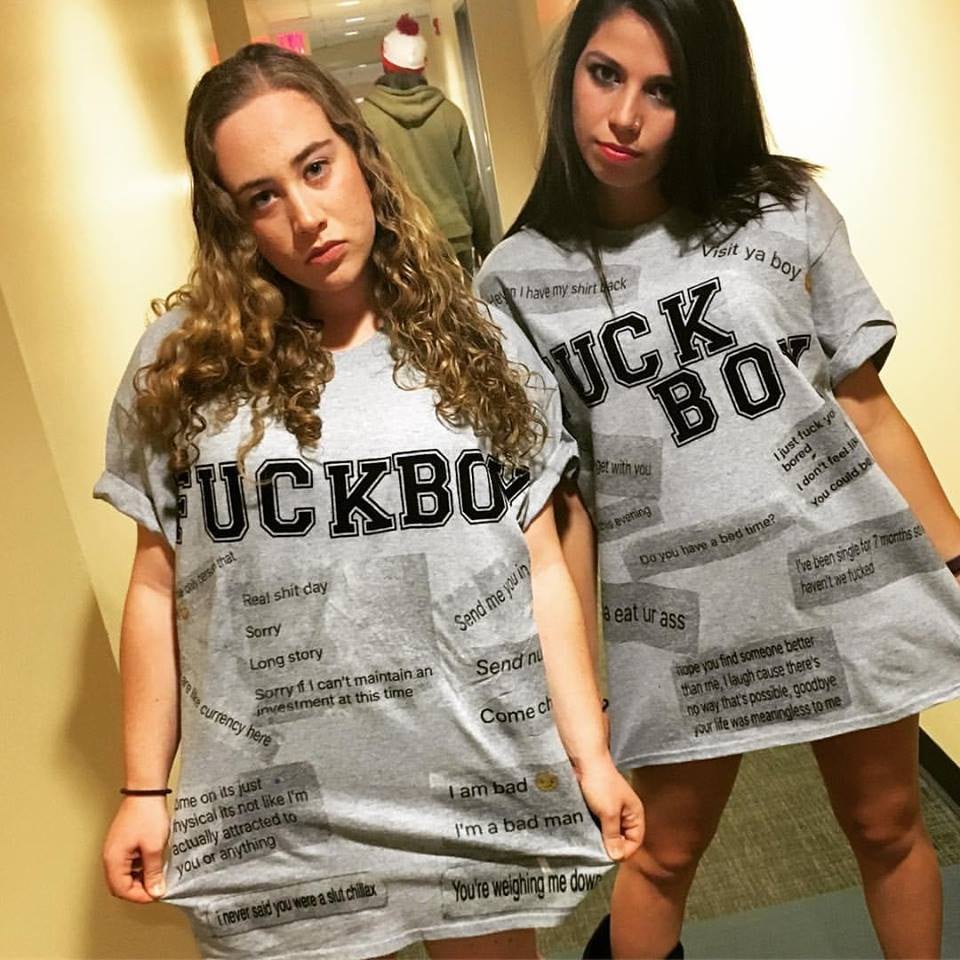 Lexi Fragola and Jessica Zharnest are two juniors at the University of Connecticut who stood out this Halloween weekend with their creative, homemade "f*ckboy" costumes. One of their friends suggested they dress up as "f*ckboys" because of their many stories about rude text messages men had sent them. Loving the idea, the two friends went to work on their DIY costumes. POPSUGAR spoke to Lexi and Jessica about their viral costume.

They bought two shirts and iron-on letters and used transfer paper to print out demeaning texts they had received in real life to put them on the shirts. "Honestly, I don't think our friends thought we would be able to execute it as well as we did," Lexi said of the costumes.

Lexi and Jessica explained what qualifies these young men as f*ckboys. "A f*ckboy is someone who either tries to say all the right things to get in your pants, or is just simply SUPER forward about what he wants, he disregards your feelings and can sometimes be degrading to women," Lexi explained. Jessica reassured us that this only applies to some men: "We are not trying to generalise all boys as f*ckboys. There are plenty of nice boys out there."

The reactions to their costume have been mostly positive, but some people haven't liked it. "We have seen a few negative reactions, but everyone is entitled to their own opinion. It's only natural that there are mixed reactions and we think it's badass so that's all that matters to us," Lexi said. As for the men who sent the texts, none of them have contacted either of the girls since.

Some of the "highlights" of the messages are listed below:

"Come on, it's just physical, it's not like I'm actually attracted to you or anything"
"Send nudes"
"I've been single for 7 months so why haven't we f*cked"
"Visit ya boy"
"I never said you were a slut chillax"
"You're weighing me down"
"come Chill"
"Hope you find someone better than me, I laugh cause there's no way that's possible, goodbye your life was meaningless to me"
"I just f*ck you when I'm bored"

Read on to see their great costumes.

Halloween Costumes 2020
Ciara and Son Future Channelled Cardi B and Offset For Halloween, and the Resemblance Is Uncanny
by Yerin Kim 02/11/20
Latest Love
×