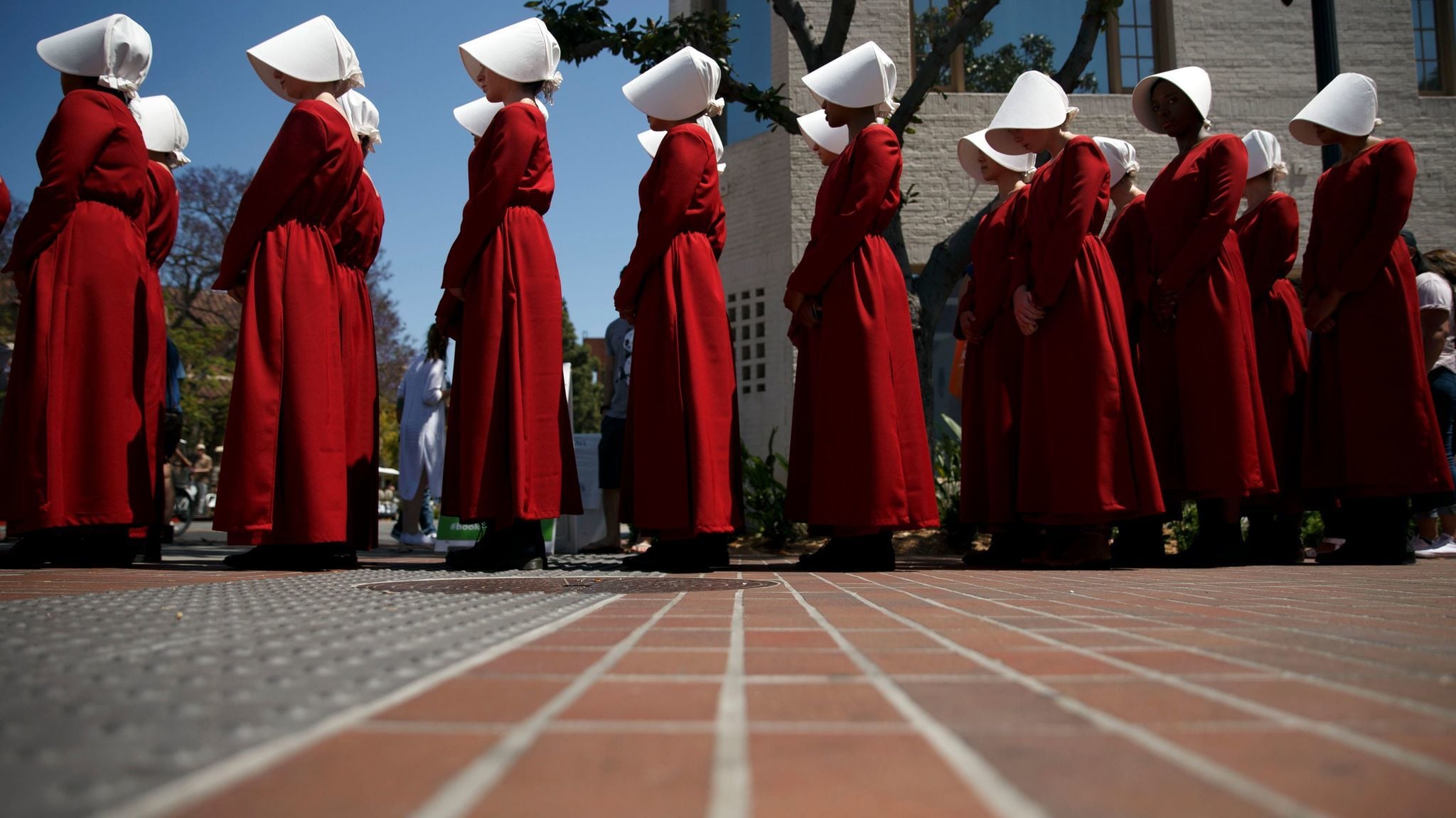 It's now been more than a month since SBS released the now Emmy-nominated series The Handmaid's Tale, and my marital bed is as cold and lifeless as one of Serena Joy's glares. Since my husband and I began spending most nights devouring another episode (all brilliant, but we can only handle one at a time) our libidos have abandoned our household for presumably a more pleasant environment. Somewhere that does not ritually visit the dystopian nation of Gilead where the majority of sexual interactions are abusive and dehumanising acts of male dominance and female submission.

Now, it's not like TV shows with grim, gritty or racy plotlines are far removed from our usual viewing repertoire. We regularly gravitate towards shows that rate high on the "What the hell?" scale (Westworld and Black Mirror are a couple that come to mind), but I haven't cried out in dismay and/or rage at the TV this much since Making a Murderer. And I certainly haven't had a series make me constantly feel so repulsed by the idea of sex before.

Related:
How the Chilling Epilogue of The Handmaid's Tale Foreshadows Season 2

Since it's had such an impact, I needed to break down just what was going on so I could reassure myself this was just a television-induced blip in our regularly scheduled bedroom programming. And I quickly realised we were repeatedly slipping into a few post-episode scenarios.

The first is "quiet contemplation".

The episode ends, the screen goes black, and neither of us reach for the remote or shift from the couch. Instead, we both just stare off in different directions, silently digesting what we were just subjected to. It's often hard to single out just which atrocity to come to terms with first: torture, rape, abduction . . . the list goes on. And it's not like the scenes gleaned from Margaret Atwood's 1984 novel are some fictitious rigmarole, this is what our world is already capable of. (Margaret reflected on writing the book in 2012 and said: "I made a rule for myself: I would not include anything that human beings had not already done in some other place or time, or for which the technology did not already exist.") Enter pessimistic teeth-brushing and melancholy sighs as one of us switches off the bedroom light — the mere thought of cuddling is definitely out of the question.

The second scenario is the onset of "passionate research".

Reaching for our smartphones and searching for more information on the bleakest parts of humanity is about as arousing as tossing oneself into a pit filled with cacti. Topics I've Googled range from learning about demonstrations where unarmed protesters were shot, discovering fundamentalist views on what is acceptable marital "relations" (that evening had me announcing, "Good news, 'touching of the breast' is not considered evil." Spoiler alert: There was still no touching of any breasts later on), and reading heartbreaking UNICEF articles about countries with the highest ratesof female genital mutilation. Again, all things touched on in the show, and all present in society today. These nights also end with absolutely zero desire to canoodle. We both simply pull the covers up to our eyeballs and stare at the ceiling contemplating how cruel and unjust the world already is.

Related:
14 Things We Already Know About the Second Season of The Handmaid's Tale

The final mood-killer is the "heated debate" scenario.

This is where as soon as the episode ends one of us will blurt something out that quickly escalates into a "discussion" that our neighbours can very much hear every word of. One particular instance was when he said,"You know, I kind of feel sorry for the men." After I picked my jaw up off the floor and gave him a decent serve of "check yourself before you wreck yourself" over reproductive rights, he defused the situation by conveying (quite succinctly and calmly, I might add) how most of the men in the show also seem pretty miserable. Yes, he made a fair point, but it's hard to feel anything but rage when you hear a government official in the show express regret for allowing women to get too caught up in educating themselves and having careers so that they forgot their true purpose — of being baby-making slaves or stay-at-home prisoners. By this stage, I'm heading to bed fully clothed both simultaneously seething and being on the verge of tears while nervously glancing at the shape in the dark where my husband is sleeping and wondering, "Would he let this happen to me?!"

But don't get me wrong, the show isn't transforming my spouse into a born-again follower of the Sons of Jacob or bringing any hidden misogyny bubbling to the surface. In fact, one of the things I adore about our relationship is being able to discuss all of the above topics since nothing is taboo. But now we've finally conquered the finale, I cannot wait until I can go back to not shuddering at the idea of getting naked in front of him. And as soon as the season two premiere date is announced, I'll be making sure to get a solid few weeks of sexy time banked before we go back on this dismal journey with Offred.

Healthy Living
I Forced Myself to Nap Over Lunch Every Day For a Week, and It Transformed My Workday
by Jen Glantz 1 day ago
Latest Love
×