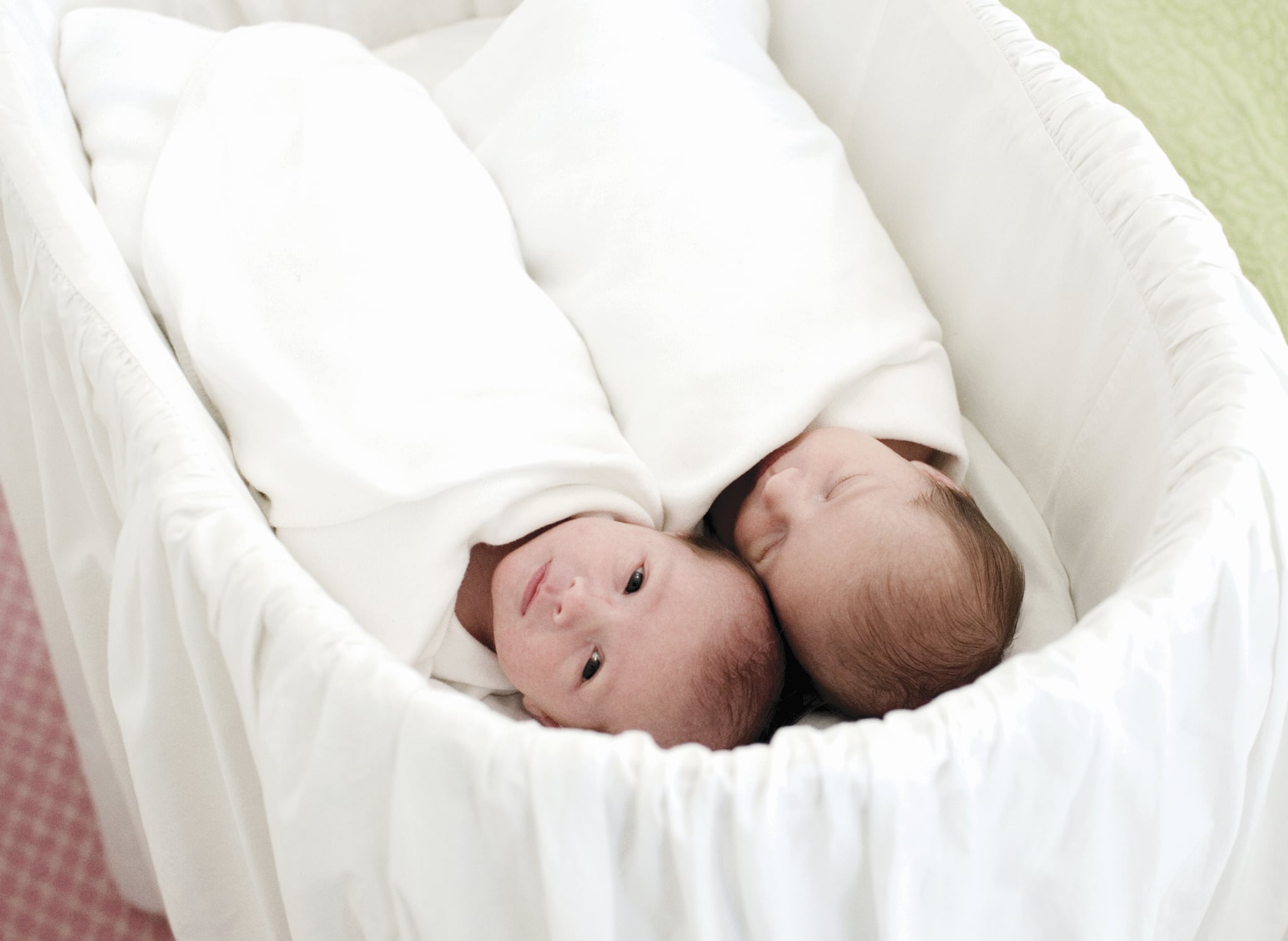 Long before there were any babies in my home, I pictured myself as a mother rocking my one tiny, beautiful baby. You know the image — it's the one in every Pampers commercial. That baby would be the centre of my world, my best friend, my everything.

The moment the doctor tells you that you're having twins, that image is gone forever.

Rocking your newborn when you have twins is rarely calm or peaceful. Unless you have a team of 24/7 helpers, you can never really be in the moment with one baby because you're always thinking about the other. Your mind is split. You're holding your breath until the other wakes up or rocking the other twin in a bassinet with your foot or babywearing one baby while holding the other awkwardly. Nobody is happy. There is a lot of crying.

As a new mum, you're constantly being told to "soak in every moment." I so desperately wanted those sweet, intimate moments with each of my babies, but as a twin parent, you simply don't have the time to soak it all in. You barely have time to eat or go to the bathroom. I felt guilty for not being able to give each baby the individual attention they deserved. Not only that, but I felt like I was missing out on a major mothering milestone.

Whenever I was told to "soak it all in," it made me feel like sh*t.

That's the thing about parenting twin newborns. It's a giant mindf*ck. It's hard to not compare yourself to singleton mums. They could go out with tiny, compact strollers and nurse their babies on the go with discreet nursing covers. When I wanted to nurse my babies, I was essentially nude from the waist up. There was nothing easy or discreet about it. I remember looking around my Mummy and Me classes and thinking that all the other mums really knew their babies. But I was jealous of mums who, like myself, probably felt defeated and exhausted most days, just in different ways.

Related:
It's Impossible to Enjoy Every Single Parenting Moment, So I'm Not Going To

It takes a bit longer to get to know your twins individually. The moment you feel like you're bonding with one baby, the other needs you. My daughter was colicky and cried hysterically for the first three months of her life. Then, when she turned a corner, my son started teething and never slept. There will be weeks on end that you will favour one over the other and feel like a piece of sh*t for feeling that way. But then again, I had two perfect little humans.

Parenting twin newborns is survival. Plain and simple. And while I love looking at pictures and videos of my babies as teeny-tiny newborns, I am so much happier that we're out of that phase. Don't get me wrong, 2-year-old twins is a lot of work, too, but now my kids have awesome little personalities and say hilarious things. They hug me and say I love you. They interact with each other, which is something that mums with one child don't get to experience. And I'm obsessed with them.

This isn't the part where I tell you that you will rise above and become Supermum. That just isn't realistic. You will do what you have to do to survive as a parent of newborn multiples. It won't be pretty and most days you will be pushed beyond your limits. And that's OK. The newborn stage is temporary (even if it doesn't feel that way when you're in it). The sooner you realise that you aren't alone and you can't compare yourself to those Pampers commercials, the easier it will be to accept your new, chaotic, wonderful normal.

For anyone out there who sees a mum of newborn twins struggling to push her double stroller down the aisles of the grocery store, I'm begging you, please don't tell her to "soak in every moment." Instead, tell her she's doing a good job. She'll thank you for it.

Image Source: iStock
I Didn't "Soak in Every Moment" With My Newborn Twins (and I'm OK With It)  originally posted on POPSUGAR Parenting
Join the conversation
Parenting AdviceNewbornPersonal EssayTwinsMotherhood
More from POPSUGAR
From Our Partners
Related Posts

Healthy Living
I Tried Mindful Lettering For Stress Relief: After 2 Weeks, I Feel Surprisingly Renewed
by Jenny Sugar 5 days ago

TV
What Is AMBW and Why Is Hollywood Just Catching On?
by Kennedy Hill 6 days ago
Latest Love
×