Did you know there used to be live mermaids at Disneyland in the late '50s and '60s? It's true! In this excerpt from Chris Strodder's book The Disneyland Book of Lists, one of these former Disneyland mermaids shares her tale. 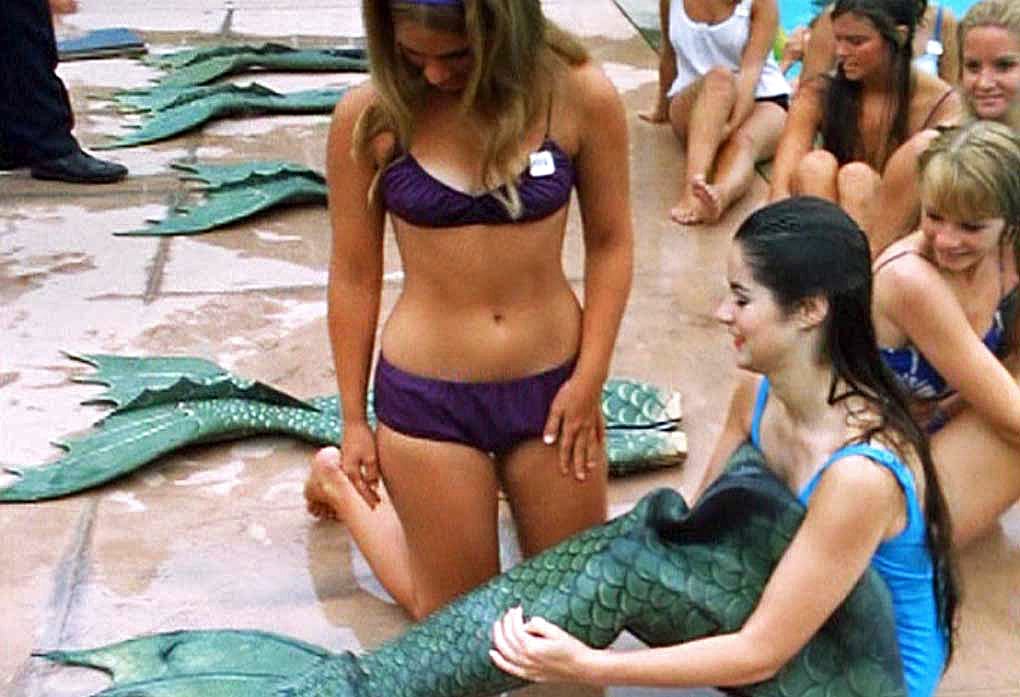 When the new Submarine Voyage launched in mid-1959, eight costumed mermaids splashed around in Tomorrowland's lagoon as part of the celebratory festivities. Six years later, Disneyland brought back a new group of mermaids for three consecutive summers. Though the mermaids were popular, extensive exposure to the lagoon's chlorine eventually became a concern, and park officials finally whistled everyone out of the pool in 1967.

One of 1959's mermaids was an eighteen-year-old brunette named Susan Musfelt (now Susan Hoose). After her summer frolicking as a mermaid, Susan attended Arizona State University, where she met her future husband. Back in California, they raised four children (her marriage and her kids, she says, are her proudest accomplishments). Now living in Scottsdale, Arizona, Susan took time out from her busy real estate career to recall her Disneyland experience with this list of six mermaid-related topics.

"In early 1959, I responded to a newspaper ad that was a cattle call for 'potential mermaids' at Disneyland. Hundreds of girls showed up at the Disneyland Hotel. As I recall, the age requirements were eighteen to twenty-four, and you had to have long hair and swimming experience.

Fortunately I'd had four years of experience swimming aqua ballet in high school, and I would turn eighteen before the submarines opened. I came directly from softball practice still wearing my shirt and shorts — being the only girl not in a bikini, I must have stood out. We were told to line up in rows of fifteen or twenty, and a man and a woman walked through the rows checking us out. I certainly didn't know what they were looking for. Those of us who were tapped were asked to go sit down near the side of the pool."

"About forty girls made it to the swimming part of the tryouts, but at least half dropped out before they even got into the water, once they realised what was expected. As our names were called, we were asked to stand at the deep end of the hotel's pool. Our ankles and wrists were tied with a soft cloth, and we were instructed to dive in and then 'porpoise' swim the length of the pool underwater as lifeguards watched over us. I had seen a couple girls succeed before my name was called, so I knew it was possible. When I dove in, I found myself sinking clear to the bottom.

My stomach grazed the bottom of the pool before I felt myself gradually rising. The porpoise movement propelled me to the shallow end, where lifeguards helped me untie and climb out of the pool. I was instructed to leave my name and phone number, I was handed a book of ride tickets, and I was thanked for coming. I had no idea whether I had succeeded or not. My family was excited that I had tried out and even more excited when, that same week, my father got a call from a Disney executive informing him that I had been selected. I was thrilled — my first real job, and I was going to be making $45 a week as a Disneyland mermaid!"

"Training was rigorous, and it was difficult to juggle swimming, school, finals, and graduation. For months prior to the grand opening, the mermaids met each afternoon at the Disneyland Hotel's pool. Hour after hour, we practiced synchronised routines. We weren't wearing the fins yet because they were still being built. The first time we swam in the Tomorrowland lagoon was only a few weeks before the June 14 grand opening. Construction was ongoing around us; I remember seeing scaffolding and workmen up on the Matterhorn, and work continued up until the last minute. I didn't meet Walt Disney personally, but we were introduced to him as a group just prior to the grand opening."

"Once the Submarine Voyage began running that summer, I took the opportunity to ride in a sub to get a better perspective of how the mermaids were viewed. From the small portholes in front of their seats, passengers could see the mermaids as we swam past while music and a running commentary were piped into the sub. For the mermaids, the view was limited. We could not see any faces inside the sub — the windows appeared blank underwater. I smiled, waved, and did flips and turns with my fins. We never surfaced until the sub had passed. The water was only fifty-five degrees and felt freezing cold, so between the subs we sat on the rocks, warming in the sun."

"We wore halter tops and matching tails. The tails were heavy rubber and came in different colours; I wore green. We slipped our feet into the fins and then flipped over to our stomachs to be zipped into the tails by two young men. Holding our hands, they then lowered us into the water. This process was reversed whenever we needed to get out of the water. Years later I thought I recognised the fins we wore when I saw Daryl Hannah in the movie Splash."

"We entered the water from a dock behind the scenes, so the public's first view of us came when we were already swimming. We'd swim on and off for about two hours and then get a forty-five-minute break. There was no verbal interaction between the mermaids and the public. In fact, we were instructed to remain in the middle of the lagoon, which put us too far from the public to interact verbally (although we could hear them call out to us). One afternoon, some boys jumped into the water to swim out to us, but they were intercepted by Disney personnel and never reached the rocks where we were sitting. Ultimately, being a mermaid and having the opportunity to work for Walt Disney was fantastic, and I treasure those memories."

Excerpted from Chris Strodder's book The Disneyland Book of Lists.

Celebrity Style
Harry Styles and Rachel Green Own the Same T-Shirt — Don't You Want One, Too?
by Sarah Wasilak 1 week ago
Latest Love
×