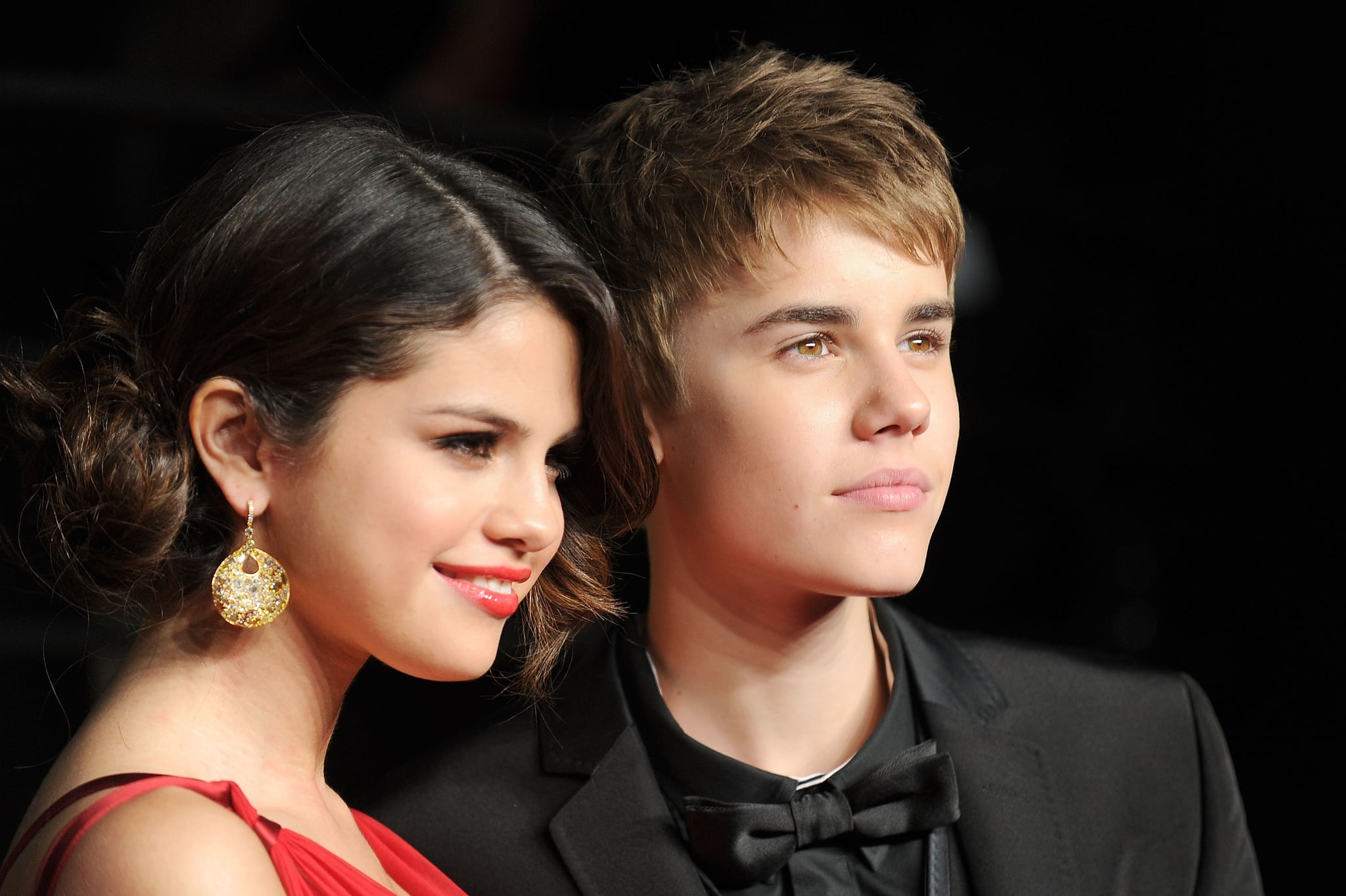 We are plagued by an almost voyeuristic fascination with celebrity couples. A month can hardly go by without a headline screeching about the "death of love" as another celeb duo files for divorce or decides to "amicably split." If you look at any famous person's Instagram, especially one who appeals to the teen demographic, you will find hundreds of commenters pining for them to get back together with their old significant other. As someone who religiously reads gossip every morning and every night, I am nowhere near above this.

I subconsciously root for almost every star-studded relationship, even though these are people I will never meet or know in real life. Each time I heard about a couple's breakup (Gwen and Gavin! Zooey and Ben! Kourtney and Scott!), I would sigh a mental "aww" and feel a pang of remorse for what could have been. Celebrity couples can be broken up for years and we still try to push them together, or at least link them together forever — journalists still ask Jennifer Lopez about her engagement to Ben Affleck, and that was almost a decade ago. One couple that continues to haunt the tabloids and fails to leave our newsfeeds is the star-crossed union of Justin Bieber and Selena Gomez.

Honestly, I can barely remember when Selena and Justin were actually ON. The only time they were officially dating was before Justin truly tapped into his bad-boy hijinks and still looked like a prepubescent tween. I remember Justin arranged a date where he rented out the Staples Center because of an Adam Sandler movie. I remember when they attended the 2011 Vanity Fair Oscars party together because Justin looked like he was going to the eighth grade dance. But for the majority of the last five years, Justin and Selena have been broken up and rumoured to be back together at least 10 times, with no official confirmation of their reconciliation. But still, we watch their hypothetical twisted love story unfold over Instagram and paparazzi shots, with no idea of how much of it is true or false. People held their breath for their reconciliation even after Justin morphed into the definition of the word f*ckboy, with Selena more or less just along for the ride, occasionally making her own headlines for going in and out of rehab. We watched Selena cry on stage at the American Music Awards during a performance of "The Heart Wants What It Wants," which was essentially a song subtweet about the sh*t Justin put her through, and teens will still post "BRING BACK JELENA" all over the internet.

The speculation around their potential reunion reached a fever pitch toward the end of 2015. Both Selena and Justin made their musical return with their albums Revival and Purpose, respectively. If you can guess, both of these albums are very much about each other. But they give off completely different messages — Selena's is more a tale of empowerment and finding strength within yourself, while Justin's mourns the loss of the girl and tries to win her back. With the almost simultaneous release of their albums obviously came an exhaustive press cycle (side note — can you imagine putting out an album at the same time as your potentially more famous ex-boyfriend? Talk about the sh*t of breakup nightmares), where both members were prodded with questions about the other. They both evaded questions of them getting back together with the insistence that they were "just friends" and "would always care about each other," but it's clear in the lyrics of Revival that Selena had some choice words for the Justin who did her wrong.

Revival is not a pop tour de force like Taylor Swift's 1989 or a sleeper hit like Carly Rae Jepsen's Emotion. It received mixed reviews from critics, with some applauding her decision to break free of her previous "safer" sound, but some dismissing her for sounding manufactured. There was an actual article in New York Magazine about how many producers and writers worked on the album, totaling around 30. No one is saying Revival is an amazing album, and Justin's Purpose likely did much better in sales and radio play. Even I can safely say that I've watched the video for "Sorry" at least a hundred times, and I agree with Kanye West that "What Do You Mean" was one of the best songs of 2015. But to me, Revival turned into an unexpected godsend.

In the fall of 2015, right before Revival officially dropped, I went through the breakup of a two-and-a-half-year-long relationship. It wasn't especially dramatic, and there was no real reason it ended besides it just wasn't working anymore and hadn't been for a while. The whole process only took about two weeks, with me traveling thousands of miles away to Iceland in the middle of the breakdown, under the impression that when I came home things would be better and hopefully fixed for good. Instead, I came back to an excruciatingly silent three-hour drive that was soundtracked by Lana Del Rey's Honeymoon, and when the "We need to talk" finally came, I could hear the "game over" noise going off in my head.

This wasn't a huge surprise — I was aware of the fact that I wasn't happy anymore, but I am of the belief that anything can get better if you believe in it enough. For the first time in roughly seven years, I found myself totally alone. I had jumped from a year-long relationship when I was 16 to an almost four-year relationship during all of college to my last relationship, which started only two months after the previous one had ended. I always liked to think of myself as independent, but this breakup made me realise how much I relied on the stability of having a partner (who usually weren't even stable themselves) to keep myself grounded. I had spent years immersing my brain in the feelings and problems of another person — what was going to happen when I was left all by myself?

This is where Revival came in. I had always been a casual fan of Selena, probably enjoying her more than the average person but never committing to her full catalog. But I had maxed out 1989 and my "boy problems" playlist, so when the album dropped, I decided to give it a listen out of desperation. Revival opens with a title track, beginning with a spoken-word segment from Selena before swooping into her personal declaration of independence.

I dive into the future / But I'm blinded by the sun / I'm reborn in every moment, so who knows what I'll become?

Is this cheesy? Kind of! But when you are broken down and crying to your mum on the phone about how you're scared you'll never have feelings for anyone again, you'll basically trust anything. Listening to Revival all the way through felt like someone gently coaxing me out of bed and back into the real world. In that month, Selena became the best friend I didn't know I needed. She was with me during the dark moments of missing someone so much it hurt ("Camouflage" and "Sober"). More importantly, she reminded me that I was done with the old sh*t ("Same Old Love") and would grow bigger and stronger than who I was in the past ("Rise"). Selena was right — this wasn't just about survival, it was about my revival. It might be embarrassing to admit, but after my many solo listening sessions and tears shed with Revival, I knew it might be OK.

By the end of the Fall, I had become fully attached to Selena and her defiant reclamation of independence. So when I saw Justin's attempts at winning her back by serenading her with "My Girl" on the piano at dinner or posting old photos of them together, it felt like sirens were going off in my brain. "NO!" I screamed internally at Justin. "You cannot interrupt Selena's emotional growth!" But my inner monologue didn't matter, because thousands of followers still commented on their Instagram pictures "you two should get married!!!!" with countless heart-eye emojis. Even DRAKE said, "Damn thought this was a current day Jelena flick," on an outdated photo of Justin and Selena on an ATV. How could anyone want to see them reunited, when it was obvious that the two weren't meant to be together?

But then I thought back to the days of when I used to unknowingly ship every celebrity couple, even though I never knew if they were happy or what their lives were like beyond a photo in a tabloid. I had so much trouble believing that relationships that appeared strong could break up because I refused to believe that love wouldn't conquer all. I found myself in long-term relationship after relationship that had exceeded their expiration date because I was stubbornly attached to the idea that if you say you love someone, it means for good. But as recent months have passed, I've found that it's much more empowering to find yourself without the restrictions of a damaged relationship. I like to believe that Selena learned this when she was writing and recording Revival, and I learned it along with her. It's insane and hyperbolic to say that love is dead, but it certainly shouldn't be forced.

So Justin, stop posting old pictures of you and Selena making out from when you were both underage. Go hook up with Kourtney Kardashian, who could use the rebound after her own experience with a dirtbag! Selena, keep doing you — some of us out here are rooting for you. For every comment shipping you two back together, there is someone who will shoot a "don't even dream about her, b*tchboy" back at Justin.

Antiracism
Justin Bieber Says Denying Racism Is "Straight Up Mean," and Well . . . He's Got a Point
by Monica Sisavat 5 days ago
Latest Love
×