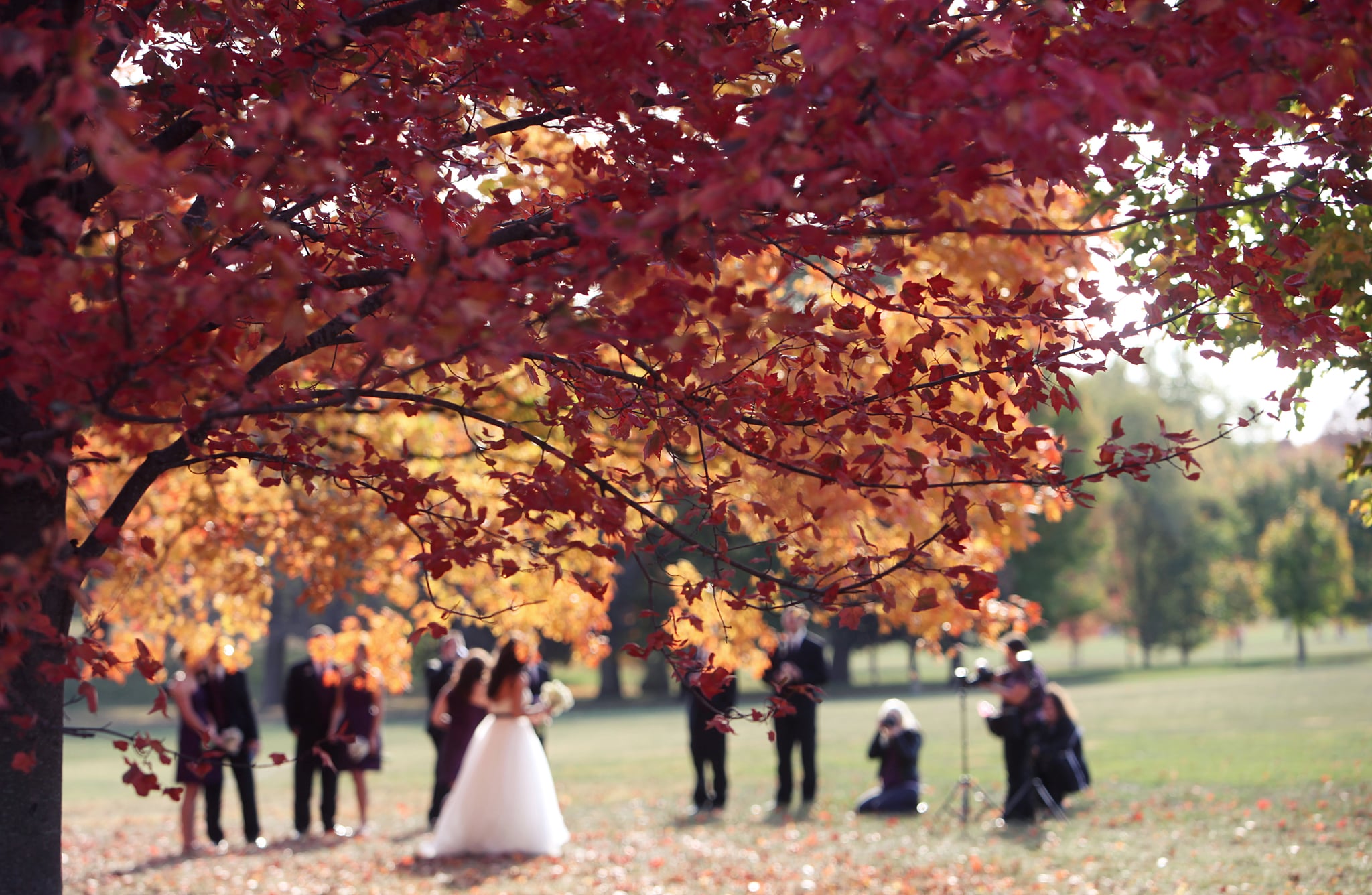 1. What is your favourite moment to capture at the wedding/reception?

"Hands down groom seeing the bride for the first time. You can't fake that reaction.

Favourite memory I have ever captured was a picture of a bride kissing her dad on the top of the head while he cried. They didn't know it at the time, but he had pancreatic cancer and died about six weeks later."

2. What's the biggest, most unnecessary thing wedding photographers charge for that is either over priced or un-needed?

"Physical wedding albums. I would buy them for $300 and sell them for $1,500. Sure they are nice quality, but you can make an album yourself for much less. Really, shooting a wedding is a F*CK TON of work. It's dirty, sweaty, and you get treated like crap. Photographer's time is worth every penny. It's the add on sales that are crap."

3. What is the most "bridezilla" thing you've ever seen a bride do?

"I had a bride get in my face and scream at me because it rained. The youngest bride I ever had (17) was so mean to her mum that she left the wedding. I had several brides that showed up 2+ hours late, and took their time getting ready while all their guests waited in 32 degree heat/humidity. But I think the one that takes the cake was the bride that gave me a PB&J for dinner while serving the guests lobster and filet."

4. What about the best bride?

"The best bride I ever had gave me a thank you bag at the end of the night with a $300 tip, wine glass with my name etched on it and a nice Pinot Noir. The card said, 'Have a glass of wine and a massage on us! Thank you for being the best photographer ever!' Definitely made standing on my feet for 12 hours, carrying 13 kilos of gear, in 32 degree heat worth it!"

5. What was your favourite wardrobe malfunction?

"Definitely the big breasted bride whose boobs fell out of her strapless dress while dancing. She was so drunk. She just tucked them back in, looked at me and said don't put that in the gallery and kept dancing."

6. What's the most scandalous thing you've seen happen at a wedding?

"I once watched a turbo drunk bridesmaid take her panties off, put them in the jacket pocket of a groomsman, and proceed to dirty dance with him in the middle of the dance floor. I saw a little too much of her that night. They ended up having sex in the get away car, and got caught by the maid of honour and best man when they went to decorate it. Learned that the drunk bridesmaid was married, and her husband couldn't come to the wedding because he stayed home to take care of their new baby."

7. If you aren't married, do you have an idea of who you want to shoot your wedding?

"I am not married, yet. But I am with an amazing man who I hope to one day marry. With that said, I'm wedding-ed out. We want to elope and have a big party instead of having a traditional wedding. I know exactly who I want to take pics of our non-traditional awesomeness."

8. Do you get to eat any of the catered food?

"Most of the time yes, but there is always that special bride who gives you a cold turkey sandwich because it's cheaper."

9. What tips do you have for couples when choosing a photographer?

"Pick someone who you think you could be friends with. This person will be with you all day. They will be in your dressing rooms, and all up in your business. Liking them will help you be comfy in front of the camera, as well as being able to get you to laugh genuinely with their humour. Start by picking a handful of people whose pics you really like. Go have coffee with them. Ask them questions about their business, but also about them. What they like and dislike."

10. Any heartbreaking moments during a wedding that you ever witnessed?

"There were several weddings where a parent had recently passed. I had a bride dance with a laptop connected to her dad in the hospital on Skype.

I think the worst was the bride that left a note on the kitchen table saying 'I can't do this.' That was a horrible day for all involved."

11. What was your strategy when working alongside videographers? Any conflicts or pet peeves?

"Worked with videographers all the time. Most of them were very kind and we worked together well towards a common goal.

Pet peeves are the videographers that think they are more important than photographers, so they step in front to get the shot, don't pay attention to where they are relative to you and stand on the middle of the aisle during the ceremony. One time I had a videographer sit down in the middle of the aisle, right at the first row of chairs to get ring exchange shots. Ruined every one of the bride's pics. She was furious. Not at me, but at the videographer for being so obtrusive."

12. What did the rudest guest you've seen do?

"Rudest guest had to be the groomsman who told me all about his penis problems. Namely how he wasn't getting laid. I didn't ask."

13. What is the most important photo you ever missed taking?

"I've had several first kisses and exits ruined by guests jumping in front of me. I would reenact the moment and include the crap photo for the bride to see. I think the worst was the night that the bride decided to do the bouquet toss while my 2nd shooter and I were eating. No one, including the wedding planner stopped her. Missed it entirely."

Wedding
Rebecca Vallance Is Launching Wedding Dresses, So Modern Brides, You Can Stop Searching Now
by Kate McGregor 4 weeks ago