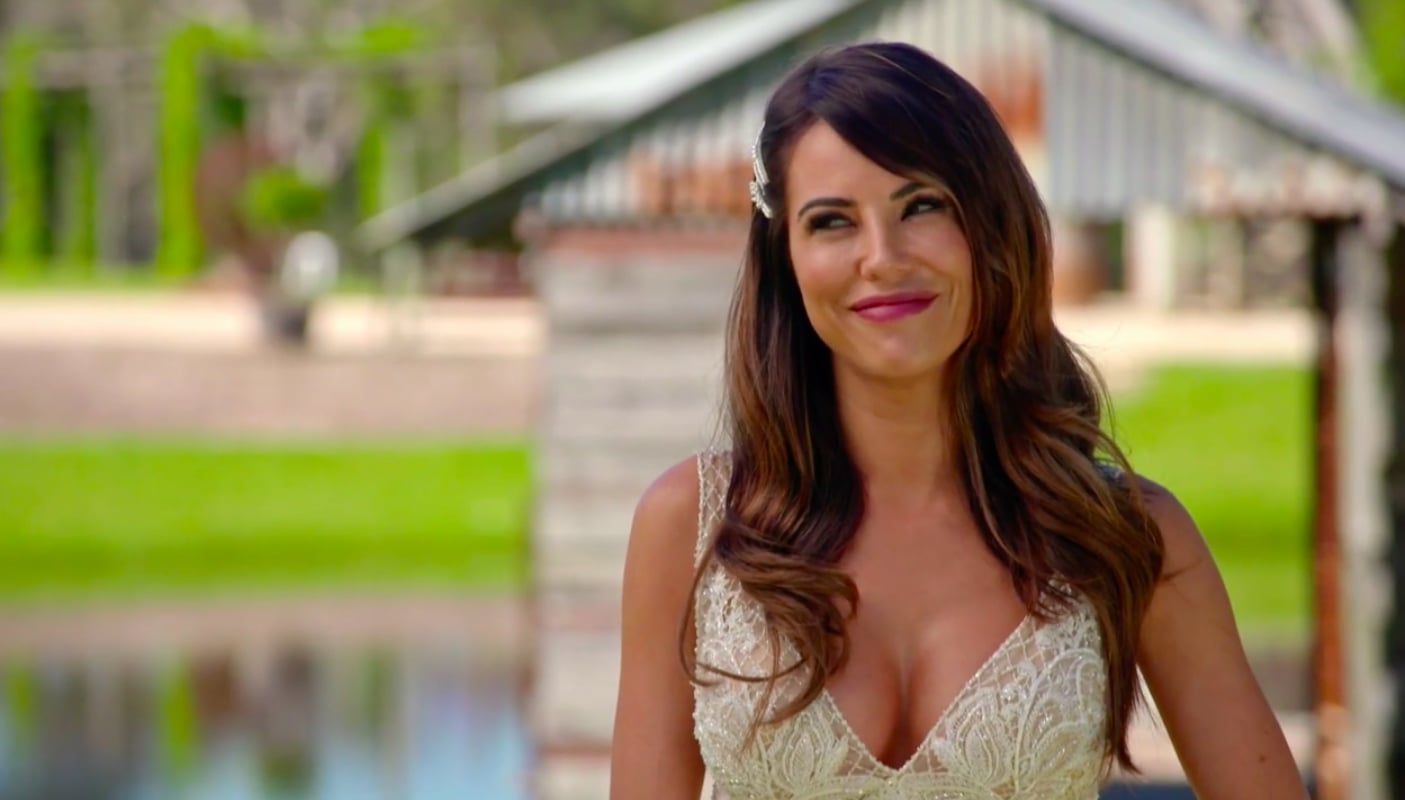 On last night's Married at First Sight, we saw dancer KC marry musician Drew. They seemed to hit it off immediately, with a certain level of sexual chemistry and similar creative and selfless interests. He heads up a mental health charity, while she runs a dance workshop that focuses on self-love.

Then during their wedding photoshoot, KC spotted a red flag: that Drew has a single woman for a flatmate, Jessie. "I couldn't be a single girl and live with him and not be attracted to him," she explains to the camera. Drew says his friend is "really cool" and like a sister.

KC is a woman in her early 30s who is just home from living overseas and lives with her family, which is fine. Anyone coming home from abroad is probably going to move back in with their parents for a little while, if they're privileged enough to be able to do so.

But to be in that position and immediately become "wary" of a man because he has a woman flatmate is pretty out of order in my eyes. She says it's because she's dated men before where "there's always girls around", and she worries Drew might be one of those guys: "Why are you still single?" He admits he's always had women as flatmates, probably because they're "tidy" unlike men.

And KC is extra suspicious that Jessie couldn't make it to the wedding too, presumably imagining a Julia Roberts in My Best Friend's Wedding scenario. She describes the whole thing as a "little weird".

But is it really weird to have women as flatmates? To be, shock horror, platonic friends with a woman?

I have plenty of straight male single friends. Can I say that none of my friends' partners have felt threatened by me living with their boyfriend, or joking with their boyfriend, or spending too much time with them? Probably not, but the fears are usually unfounded. There's nothing wrong with a man and a woman sharing an emotional intimacy but no physical or romantic connection.

Men and women can be friends. Even pairs of extremely attractive men and women, like Drew or KC. Maybe someone felt something more, the other didn't, and they decided together that they work better as mates. Maybe neither of them ever found each other attractive in that way, or were ever single at the same time. Maybe, just maybe, none of this matters anyway. Heterosexual people are taught to view the opposite gender as something to "win", and we need to break down that idea and replace it with mutual respect. We're capable of all manner of complicated relationships with other people, and we choose to have them. Your life isn't going to play out like a romantic comedy, like My Best Friend's Wedding or When Harry Met Sally. Although movies like that probably explain where these misconceptions come from . . .

There are times when there's a disconnect: studies actually show that men are more likely to overestimate how attracted a woman friend is to them, and women often assume a lack of chemistry is mutual. That can be difficult to navigate. But you can choose to work through that awkwardness together and find a way forward, because relationships with people of other genders help you understand other people, yourself, and the world at large.

I've been the jealous partner in a relationship. I've felt deeply insecure — just like KC's fellow MAFS bride, Cathy — watching my boyfriend seemingly flirt with other women in social situations. It hurts. But often what it really illuminates is a lack of trust in your relationship, or something else lacking. You don't believe that you're worthy of them, or that they could really love you, and not the gorgeous woman they're having a polite conversation with. And that's not a healthy way to view yourself or your relationship. It can even be toxic, fostering resentment, when what you need is openness and trust.

For me, extremely single at 27, the difference between a romantic/sexual relationship and a friendship is as simple as desire. You can share emotional intimacy, conversation and love with your friends of any gender. Otherwise, how would your emotional needs be met outside of a romantic relationship? Heck, I prefer that closeness between friends to trying to be vulnerable with a new partner. That's hard! What distinguishes that closeness from a romance is as little as whether or not you want to get rip each other's clothes off. And when you've got that spark to begin with you start to build a friendship.

Sometimes, admittedly, things go the other way. You spend all your time together and feelings start to grow, and they can be explored. But the older I get the more I think that the times in my life where that has happened, it's been a partnership out of convenience. We had the same interests, the same social circle. "They're here, they like me, why not?" I want more than that now.

Everyone says they want their partner to be their best mate. But isn't that what best mates are for? Your partner can be your best mate and the person you most want to see with their clothes off. But if they're just your friend — woman, man or non-binary — you probably don't feel that lust.

It's OK for Drew and Jessie to just be friends, to support each other when they go on dates, to offer small acts of kindness in the day-to-day of living together, like sharing a meal or folding each other's clothes. And there's nothing for a potential spouse — like KC — to fear there. They're friends, and that's all they have to be.

Married at First Sight airs on Channel Nine, Sunday to Wednesday. Join us at our Facebook group Pass the Popcorn to gab about all things MAFS.

Opinion: Of Course It's Possible for Men and Women to Be Just Friends  originally posted on POPSUGAR Celebrity
Join the conversation
MAFS 2020MAFSMarried At First SightAustralian TVReality TV
More from POPSUGAR
From Our Partners
Related Posts