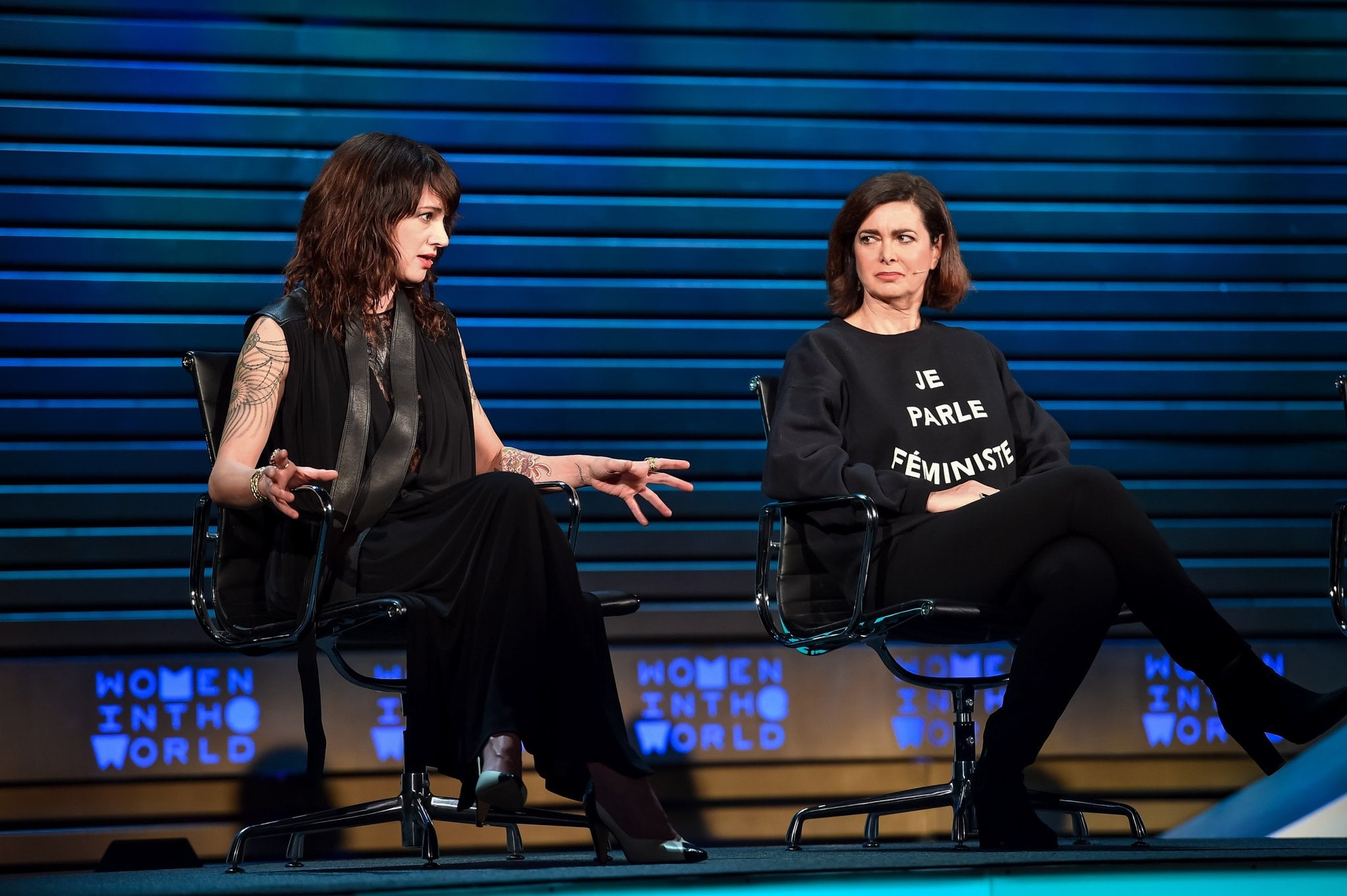 Six months after allegations of Harvey Weinstein's sustained and gruesome campaign of sexual harassment first began to surface, the #MeToo movement has taken a firm hold on American and Australian culture. But beyond the borders of these countries, there have been varying rates of progress when it comes to women's rights. Now, actor and director Asia Argento — who was one of the first women to speak publicly about her experience with Weinstein — is speaking out about the situation women face in her native Italy and around the world.

Ronan Farrow's story in The New Yorker, which revealed that the disgraced Hollywood producer forcibly performed oral sex on Argento, made her an outcast in Italy, she explained during a panel at the annual Women of the World Summit on April 12. Argento was one of 13 women who spoke with Farrow for that story, which built upon claims against Weinstein reported by Jodi Kantor and Meghan Twoey in The New York Times in early October 2017. Argento said that after coming forward, she received death threats and threats of sexual violence and was called a "whore, liar, traitor and opportunist" in the Italian media (and those are just the printable words.)

"I had to speak the truth, that was all there was to it," she said during the panel, which was moderated by Farrow. "I never had a five-year relationship with Harvey Weinstein."

In addition to printing stories about Argento that were "completely distorted," Argento says the Italian media asserted that "a person like me could not be raped, that I deserved it, that I wanted it, that I had work from him after, which I didn't.".

"That's why what came out of Italy that was so purulent, so disgusting," said Argento. "This misogyny that came out, it's a malady, an illness that needs to be cured."

Argento appeared alongside Laura Boldrini, Italian Parliament Speaker and well-known feminist, who has also received threats on social media. Earlier this year, supporters of the far-right Northern League party burned an effigy of Boldrini on a bonfire. Rounding out the panel was Ambra Gutierrez Battilana, a model, who recorded damning audio of Weinstein in 2015 and testified against former Italian Prime Minister Silvio Berlusconi after witnessing one of his infamous "bunga bunga" sex parties.

In Italy, #MeToo is an example of what happens when a movement designed for women's voices and experiences tries to take hold in a country with deeply embedded ideas about a woman's role in the home and in society. Boldrini and Argento say that the key struggle is that as the movement unfolded in the US, in Italy women simply did not speak out. The Italian media covered #MeToo movements abroad, but inside its borders, Argento says, "it did not exist."

After the hell Argento went through at the hands of the Italian press, women considering speaking out about their experiences would be deterred, having seen her "being called a whore, a traitor, a prostitute, whatever," she says. "What would have happened to me if I spoke when I was 21 and this happened to me? I would have killed myself. What chances does a woman stand to speak out against a predator? Zero in Italy."

Argento stresses, however, that despite the struggles Italian women are facing, "[The #MeToo] movement is the most important thing to happen to women since the right to vote."

In February, 124 Italian actresses and women involved in the country's film industry published a letter titled "Dissenso Comune" (Common Dissent) in the La Repubblica newspaper. Argento, who was not named in the letter, said it was "watered down" and was published too late in the game for her to want to be involved. One signatory of the letter, director Laura Bispuri, responded by saying: "#MeToo is paving the way for discussion and a greater awareness of this problem."

The problem of sexual harassment in Italy also extends far beyond the film industry. Boldrini, who wore a sweater declaring "Je Parle Feministe," spoke about being the target of the Five Star Movement, or M5S, an Italian populist political party that, among other things, believes vaccines cause autism in children. "It is becoming a political tool to attack women politicians," she said.

Rape survivor @AsiaArgento: In Italy women are threatened, bullied, slut-shamed & called whores for denouncing rapists.
At the same time, there is a man who was recently accused of rape by 15 different women, yet now, he is back getting hired, working. @WomenintheWorld pic.twitter.com/Jm6LBJjxrl

For context, several years ago Beppe Grillo, a comedian and co-founder of the Five Star Movement, asked his followers, "What would you do if Boldrini would be in a car with you?" Matteo Salvini, leader of the anti-immigration Northern League party, more recently compared Boldrini to an inflatable sex doll. Boldrini has encouraged Italy to do more to integrate refugees and migrants into a society where they are not welcome.

"One day I received a bullet by mail. That day I realised we were entering a new phase of violence," said Boldrini. "If I had been a man, I would not have been treated like this. I am sure, 100 percent."

Amid their personal stories, Argento, Boldrini and Gutierrez made sure the stark statistics of Italy's problem weren't forgotten. More than eight million women in Italy — nearly half — say they've experienced sexual harassment at work. One woman is killed every three days by an intimate partner.

While the panel focused on Italy, it's worth noting that as more underrepresented voices come forward and declare "Me Too," many other countries continue to grapple with with the implications of the movement against the backdrop of varied cultures. In France, more than 100 women in the country's film industry, led by actress Catherine Deneuve, signed a letter that dismissed the movement as "puritanism in the name of a so-called greater good." Amid stringent censorship, China has finally found its #MeToo moment after millions of people shared the story of Gao Yan, a student who killed herself after she was allegedly raped by her professor two decades ago.

Looking to the future, Argento said it's important to include men in the conversation and to educate boys, ensuring the next generation of men does not repeat the same mistakes of the past.

"The backlash, it was fuel that they threw into my fire. When you speak the truth about what happened to you, there is nothing stronger than that," said Argento. "This fire, this martyrdom of being misunderstood, it made me a warrior even more. It became a discourse that united a lot of women. My strength came came from the other women, my sisters."

"We're not victims, we are victorious," she added. 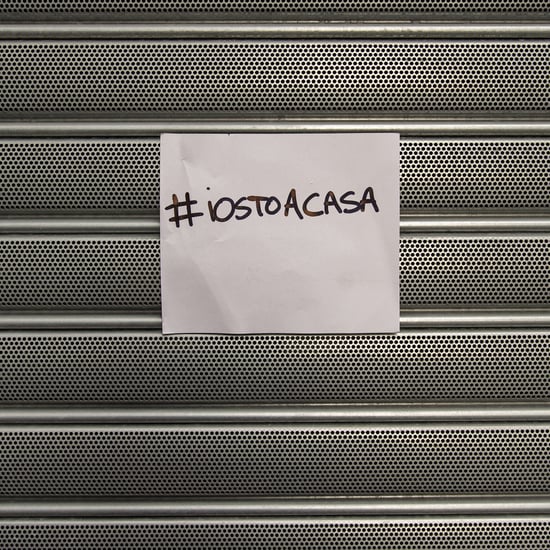 Coronavirus
I Live in the Coronavirus Red Zone in Italy, and Please, Please Stay Home
by Michele Pagani 19/3/20