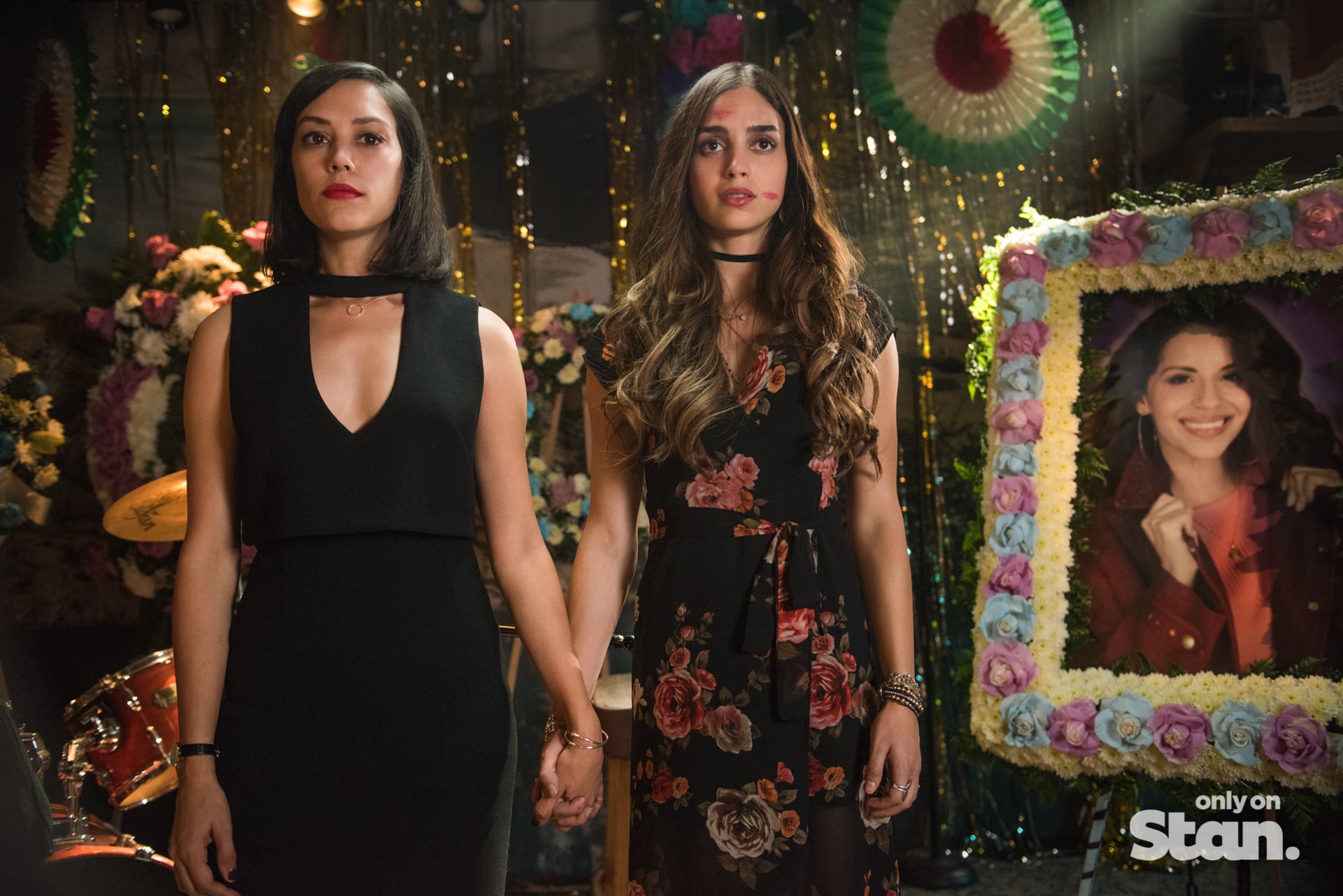 In the second-to-last episode of Vida, Emma Hernandez (Mishel Prada) meets with a woman in East Los Angeles who's looking to temporarily rent out her home. As she takes out her phone to Venmo the owner the deposit, a young woman with blue lips, hoop earrings, and a bandana rides up to the woman's front lawn on her bike, and she's visibly angry. The woman calls the home owner "Christopher Columbus," adding, "I know what you did to the family who lived here. You should be f*cking ashamed of yourself!"

Vida, which will make its debut on Stan on May 7, explores the issues Latinx individuals face on a daily basis, things like gentrification — which has been very common in Latinx neighbourhoods such as East Los Angeles, where the show is set — but have often either misrepresented or omitted from cultural portrayal overall.

The series follows sisters Emma and Lyn (Melissa Barrera), who come back to their hometown after the death of their mother, Vidalia, to make arrangements for her burial and decide the fate of the bar and apartment complex their mother owned and operated all their lives. While it is unclear how long it has been since Emma and Lyn have been back home, what is clear is that their neighbourhood is undergoing some major changes — from the shops being taken over by white artists to the family homes being bought out from under their owners, Vida's interpretation of gentrification in LA leaves no stone unturned.

In a recent interview with POPSUGAR, Prada and Barrera unpacked some of the the many complicated layers of gentrification. While the displacement of lower-income families is the most obvious problem for these communities, the issue is more nuanced than many realize. Take, for example, gentefication: the process of change in a Latino neighbourhood caused by younger Latinxs moving back and opening businesses of their own, a process which can be just as complicated and contentious as gentrification itself.

"You think, 'Oh, this is great because I'm making my community better,' but what is the cost really?" Prada explained. "I don't know if there really is a clear answer. I don't know if the show attempts to create the answer; I think the show just really creates the questions and creates awareness."

"The most important thing is to bring awareness to what's happening because you can't ignore it," Barrera added. "And the show is not afraid to go there and to use correct terms . . . we're not trying to disguise things or soften things. This is real life. This is what's happening." 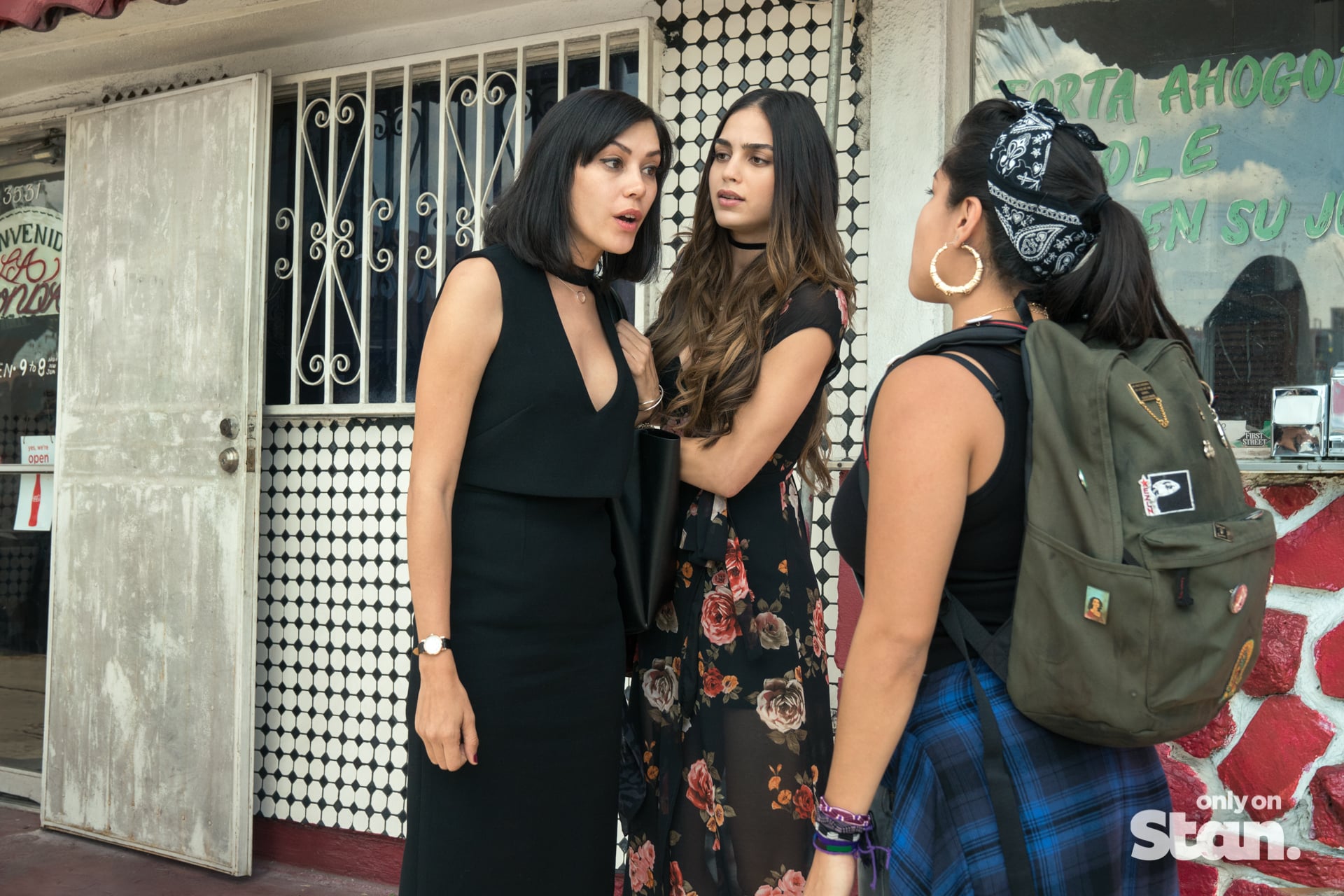 To say the show is blunt about gentrification is somewhat of an understatement — Mari's outspoken character refers to gentrifiers as Christopher Columbus while Emma and Lyn try to figure out what to do with their mother's tenants, many of whom are undocumented. Vida approaches these sensitive issues carefully and fairly, looking at them through different lenses and weighing the different causes for the problem's existence in the first place.

The Stan series also recognises that sometimes trying to fix a problem can actually make things worse, something the show's creators went through lengths to avoid during filming. According to Prada, the series, which was shot on location, was very careful when it came to displacing and inconveniencing the residents. "There was so much awareness and respect of the neighbourhood," she said. "I think a lot the time, Hollywood sets come in and are like, 'We're shooting a TV show, get out of the way! This street is closed,' and all this stuff. There was a lot of respect and honouring of the neighbourhood and really trying to only be there for the amount of days that we needed to be there."

While the bar was built by set designers (the location was originally a 99-cent store), the rest of the show was shot in various locations and businesses in East LA — with the permission of the business owners and residents, of course. For instance, the taqueria Emma and Lyn eat at after their mother's funeral is a real taco shop people can go to. In fact, the waitress was actually one of the owners, according to Prada. "It was a lot of bringing in friends and other people in the community to just bring it to life," Prada said.

Vida's mindfulness, on top of its all-Latinx writing room, is what makes the show possibly the most unapologetically Mexican-American show out there. It simultaneously honours Mexican traditions of the past that you remember from when you'd stay at your abuela's house as child while also addressing current issues that matter to Latinxs, like the struggle of honouring two cultures. Its attention to detail both on screen and on the set will not only make Latinx viewers feel at home, but also encourage them to fight for those homes.

TV
The Undoing: Elite Reardon School May Not Be Real, but It's the Typical NYC Private School
by Hedy Phillips 8 hours ago

TV
Someone Turned David Rose's Sweaters Into Mini Christmas Ornaments, and I Need 'Em All
by Chanel Vargas 8 hours ago

TV
So, What Exactly Are Those Green Pills Beth Takes on The Queen's Gambit?
by Kelsie Gibson 8 hours ago