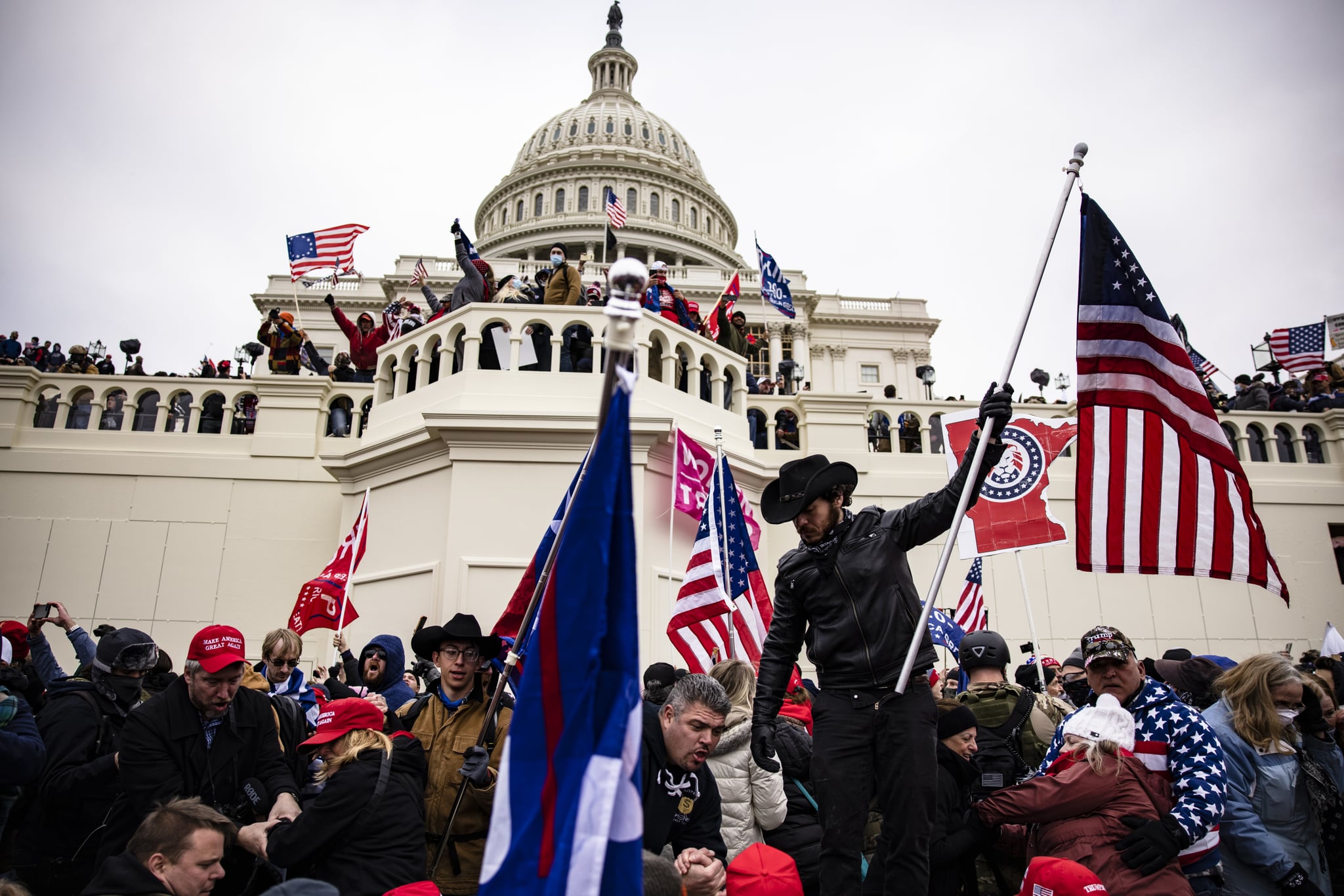 Yesterday was supposed to be a quiet day for me. I had fallen behind on work, and I expected that the only hindrance to catching back up would be the proximity of my Netflix tab to the Google doc I was working in. But right as I was settling into the optimal laptop-hunch, my coworker sent me a screenshot that read, "US Capitol Breached." The thoughts running through everyone's minds during the insurrection in Washington, DC, were ones of concern and confusion. But after the initial questions like, "How could this happen?" I could only wonder how no one had been seriously, or even fatally, harmed by police.

A mob of pro-Trump supporters had marched to the nation's sacred site, some flaunting white supremacist paraphernalia and riot gear. They were emboldened by Republicans' relentless, yet woefully unproven claims of election fraud and determined to initiate "trial by combat," as instructed by the president's lawyer, Rudy Giuliani, mere hours before.

I watched this band of seditious criminals plow through barricades, scale the Capitol walls, and fight their way into the rotunda and then into the chambers of Congress, where they defaced property and casually posed for photos at the lectern or with their feet propped up on the desk of the Speaker of the House. Even once the Capitol was cleared, they remained on the grounds long after the enacted curfew. At each step, I waited pleadingly for the police to intervene and protect these symbols of freedom and democracy. Where were the rubber bullets and the hastily erected fences and the fountains of tear gas that marred the otherwise peaceful Black Lives Matter protests in DC last year? Why were there no busloads of bruised and bloodied bodies, following mass arrests?

Where were the rubber bullets and the hastily erected fences and the fountains of tear gas that marred the otherwise peaceful Black Lives Matter protests in DC last year?

Did the police simply run out of enthusiasm for their sworn duty, just as insurgents stormed a federal monument that hadn't been breached since the War of 1812? Last summer, Donald Trump vehemently supported jailing demonstrators for 10 years, telling governors that would ensure that "you'll never see this stuff again." Certainly, by his standards, defiling the private chambers of the person who is third in line to the presidency would merit at least 25 years. Surely breaking down the doors to the Senate is far more disrespectful than kneeling during a national anthem. And if that's the case — if the actions taken yesterday were so unforgettably heinous — where were the police? Well, one was taking selfies with these terrorists, while others simply let them walk on by.

For communities who have fairly protested the government's actions for centuries, there's no question as to why these rioters were treated differently than those protesting racial injustice. It's obvious why one group was called "thugs" and the other "very special" and "great patriots who have been badly and unfairly treated for so long," in the words of our president. The difference is and always will be race; it's about who stands to benefit from the change being demanded. I'm not surprised that a collective of Black and brown demonstrators rightfully seeking refuge from systemic racism and police brutality were brutalized, while a mob of mostly white, Republican men and women were allowed to run rampant in the streets.

However, I am shocked that the "party of law and order" has pushed the line of loyalty to the president so far into absurdity that attempting a coup is more patriotic than allowing the peaceful transition of power. I'm astonished that the police and National Guard and FBI — all of whom were called in — could not comprehend the seriousness of yesterday's events, simply because the perpetrators could pass a paper bag test. Black people are killed for wearing a hoodie at night or walking in a white neighbourhood or asking to breathe. That's why we protest and organise and plead for change, even as our deaths are met with an utter lack of care and concern.

The police response to the insurrection at the Capitol was maddening and yet another reminder of the flagrant oppression of Black voices.

The police response to the insurrection at the Capitol was maddening and yet another reminder of the flagrant oppression of Black voices. But between the ripples of anger and sadness that washed over me yesterday was the realisation that I was watching the desperate actions of a people who have yet to truly fear their government. A class of Americans who, for the first time, felt as if their way of life would be earnestly threatened by a new regime. They protested not to dismantle centuries of inequality and murder and unfair policing, but at the vague possibility of things not going their way after Jan. 20.

They stripped the sanctity of democracy from the walls of the US Capitol to delay what we've all sensed is coming under the new presidency: a time where the cries of those who have been disenfranchised since the dawn of this nation's birth might not only be heard, but actually believed, by those with the power to do something about it.