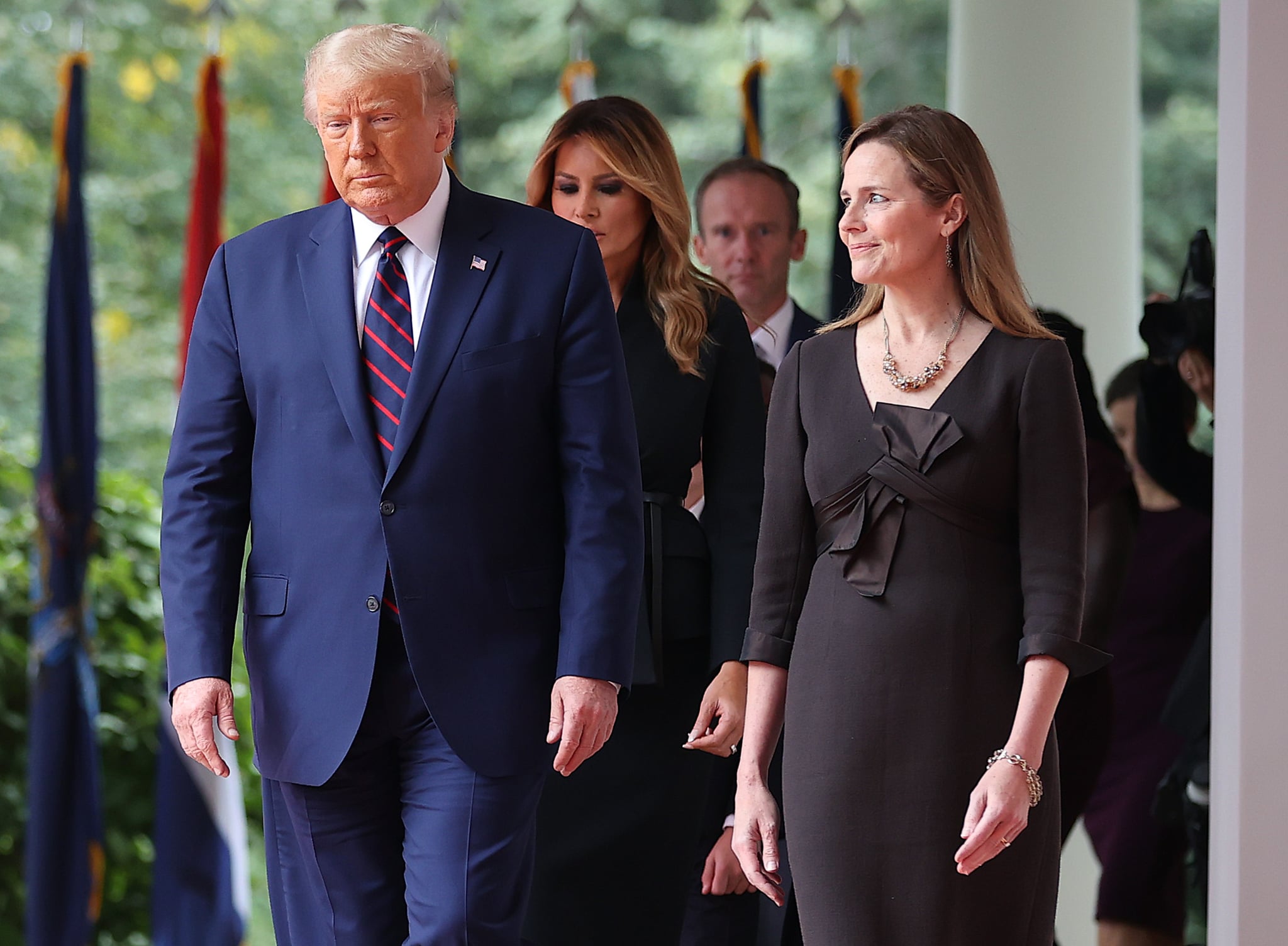 Eight years ago, Rachel Wyers did what one in four women will do in their lifetime. She received an abortion at a now-closed Planned Parenthood in Mobile, AL, during her senior year of college. "It seems that the only women allowed to talk freely and without fear about their abortions are the ones who have deep regret for having had them," Wyers wrote in an Instagram post last October. "I do not regret my abortion today . . . The only regret I have is regret for remaining silent when my friends politically debate abortion like it's an abstract concept."

Wyers chose to share her abortion story after a proposed six-week abortion ban in her home state made national news, but the issue has remained top of mind for her ever since. "Months ago I said to a friend that my worst fear was RBG dying while Trump was still in office," Wyers told POPSUGAR. "This is a nightmare." As we enter into one of the most important election years since the founding of this country, more than half of the population's rights to bodily autonomy hang in the balance. President Donald Trump's announcement on Sept. 26 nominating Judge Amy Coney Barrett for a seat on the Supreme Court following Justice Ruth Bader Ginsburg's passing sparked fear in millions of women and people who can become pregnant: what does this mean for abortion rights?

"Reproductive justice was hanging in the balance even before the passing of Justice Ginsburg."

Celebrities and politicians alike took to Twitter to voice their concerns about Barrett's qualifications. California State Senator and Democratic vice presidental candidate Kamala Harris tweeted that the Republican Party "intends to destroy the Affordable Care Act and overturn Roe." Academy Award winner Patricia Arquette hoped that President Trump's selection would invigourate the American public to vote against him because "they remember their mom, sisters and friends who died from back alley abortions." Actress and human-rights activist Padma Lakshmi shared similar sentiments: "Confirming Amy Coney Barrett, who has a judicial record of restricting abortion access, to replace RBG is an enormous step backward for this country and for a person's right to choose."

Even though Barrett's nomination is in question given the COVID-19 cases spreading among Republican senators, this communal fear remains well founded. Religious conservative Barrett has previously referred to abortion as "always immoral" and "barbaric"," and has a clear antiabortion rights judicial record. Since her appointment in 2017 to the 7th Circuit Court of Appeals, Barrett has ruled on three major abortion-related cases in favour of restrictions to abortion access in her home state of Indiana, including banning abortions for reasons related to life-threatening conditions and alerting parents if a minor seeks an abortion. Barrett has loudly been applauded by Marjorie Dannenfelser, the president of antiabortion rights political group Susan B. Anthony List. Now, it seems that Barrett is in the position to possibly overturn the landmark 1973 Roe v. Wade, or at least circumvent the ruling to make abortions virtually impossible. Despite President Trump's claims during the first presidential debate that Roe v. Wade is not on the ballot for the Supreme Court to review, he has made it clear he only plans to appoint justices who would overturn the ruling.

It is estimated that 17 abortion-related cases are "one step away" from the Supreme Court.

In the last few years, abortion rights have quietly been challenged and stripped away across the country. It is estimated that 17 abortion-related cases are "one step away" from the Supreme Court, and three cases, including a 15-week abortion ban in Mississippi, could be taken up as soon as next session. Last year also saw multiple six-week abortion bans in 15 states, and 58 abortion restrictions within a mere six-month period. Since 2019, there have been more than 300 bills introduced across the country to restrict abortion access, and 11 states have passed limits or bans on "many or most" abortions, though so far courts have ruled these laws unconstitutional. COVID-19 led to additional state restrictions on abortion care, citing safety concerns from the virus.

However, a Pew Reserch Centre survey found that public support of abortion is at a record high. More than two-thirds of Americans believe abortion should be legal in all or most cases, the highest support in over two decades. The same survey stated that 59 percent of the public say their concern is that some states are making it too difficult to receive an abortion.

Justice Ginsburg's passing was unfortunately the tipping point to shed a light on abortion care in 2020. Planned Parenthood Votes Spokesperson Tess Whittlesey told Politico that the group recruited twice as many new volunteers for the get-out-the-vote effort in the days since Ginsburg's death. The Democratic Party also raised $90 million in 28 hours after RBG passed away. But is such newfound support enough to ensure Roe v. Wade is upheld?

If anything, RBG's death has proven that social media can be harnessed to create real policy change from both sides of the aisle. Republican Rep. Douglas A. Collins took to Twitter on the night of Ginsburg's death, writing "RIP to the 30 million babies who died during the years she was defending abortion." Later, Collins called on fellow Republicans to seize the moment: "We've got our best chance in decades to strike down Roe V. Wade."

The fear of Roe v. Wade being overturned demands a personal response to political threats.

Dr. Deana Rohlinger, author of Abortion Politics, Mass Media, and Social Movements in America, points to this right-wing rhetoric as the key disconnect between public opinion and abortion legislation. "Abortion is also a closeted issue; because this is not something women have [previously] shared, activists literally have to change the culture around abortion talk. This is an uphill battle," said Dr. Rohlinger said. "These harassment tactics are designed to silence women, and as long as these tactics flourish, many women will hesitate before speaking out about their abortion experiences."

The fear of Roe v. Wade being overturned demands a personal response to political threats, but efforts to rally that public support have highlighted the stigma that remains around abortion. Last May, actress Busy Philipps took to Instagram after a proposed Alabama abortion ban made national news: "1 in 4 women have had an abortion. Many people think they don't know someone who has, but #youknowme. So let's do this: if you are also the 1 in 4, let's share it and start to end the shame. Use #youknowme and share your truth." While Philipps met with the ACLU and spoke to media outlets about the importance of abortion rights, other people did not post with the hashtag to the same extent as other digital protest campaigns. To compare, #YouKnowMe barely reached 90,000 posts overall, where #MeToo — first used by actress Alyssa Milano in October 2017 with reference to Tarana Burke's organisation of the same name — collected 200,000 posts in a mere 24 hours.

Wyers decided to use #YouKnowMe after months of debating whether to share her story. Now, with Barrett's nomination, Wyers believes it's even more imperative to humanize abortion rights. "I think it's more important than ever for women to come out about their abortions," Wyers told POPSUGAR. "If we were to come forward and actually say 'Hey, rather than talking about abortion in these political debate terms or conceptually, I actually had an abortion,' it might be the only way we can stop the erosion of abortion access for the future."

President Trump's nomination of a female judge to the Supreme Court further adds an additional layer to the conversation around abortion rights. On the surface, it may seem like a woman would want to preserve women's healthcare, and yet Barrett's personal and political beliefs are proof that all women are not feminists willing to challenge the patriarchy. According to Dr. Michael Boyle, author of "Measuring Levels of Deviance: Considering the Distinct Influence of Goals and Tactics on News Treatment of Abortion Protests," Barrett's nomination is a form of factionalizing. "There is a real possibility that this issue is narratively pushed to suggest further breakdown of the women's or feminist movements, because those opposed to abortion rights can point to the fact that Amy Coney Barrett is a woman, and 'see, not all women support abortion,'" Dr. Boyle told POPSUGAR. "It would be an effective tactic from a narrative standpoint to [post abortion stories] that would help normalize, demystify, and potentially destigmatize abortion. These hashtags give a framework so we can see it as not just a political issue, this isn't just pro-life or pro-choice, this is people being affected."

Dr. Boyle suggested abortion supporters should similarly rally online like those who posted for #MeToo. The digital protest expert outlines the usage of key inflection points such as the death of Justice Ginsburg to ignite a public campaign for politicians to take notice. Whether or not Roe is repealed under Barrett's appointment, abortion access remains in disarray nationwide. The Supreme Court narrowly ruled against a Louisiana abortion restriction this summer in June Medical Services, LLC v. Russo that otherwise would have left the state with only one abortion provider, and another 15 states with access "profoundly changed." Currently, Congress is reviewing the Women's Health Protection Act, which would secure the rights to an abortion regardless of which state someone lives in. Similarly the Equal Access to Abortion Coverage in Health Insurance (EACH Woman) Act would overturn the 1976 Hyde Amendment and make abortion affordable for millions of people.

Claire Chevrier, who works in policy counsel for the ACLU of Ohio, spoke to POPSUGAR about where abortion rights currently stand. "Reproductive justice was hanging in the balance even before the passing of Justice Ginsburg, and that's because even the cases that we saw recently this term that seemed to promote reproductive justice were done so on very narrow grounds," Chevrier explained. "There will be lots of different ways abortion can be chipped away at, whether that is by extending waiting periods or other specifications [like TRAP Laws] that make it difficult for abortion providers to continue to operate."

This current "death by a thousand cuts" tactic, according to Chevrier, could be fast tracked by Barrett's appointment. "With the confirmation of Barrett, it does become substantially more possible for [abortion bans] to not become piecemeal but [Roe v. Wade] entirely overturned."

This makes the discussion around abortion rights more urgent than ever, and requires both financial support, protests, and voting to protect reproductive rights. Abortion providers like the Michigan-based Reclaim Project also emphasised the need to keep pushing ahead. "We all know somebody who had an abortion, so we can't put the pressure all on the people who had abortions because it might not be safe for them to share. I think the more we all talk about it, the more it is out there, what's when you start to destigmatize and make it more acceptable," Reclaim Project Board President Lara Chelian stated to POPSUGAR.

Wyers bravely spoke out against the threat barring a woman's right to her body. While people of all genders are threatened, blamed, or ignored for sharing their abortion stories, many people are willing to put it all on the line to destigmatize this important aspect of healthcare. "In some ways, you have to sacrifice your safety and reputation, but it's important for people to know that abortion is normal. It's so, so normal," Wyers said. "Now it's simply about not being ashamed."

Editor's Note: At POPSUGAR, we recognise that people of many genders and identities have vaginas and uteruses, not just those who are women. For this particular story, we interviewed experts who generally referred to people with vaginas and uteruses as women.

Healthy Living
What You Should Know About Dexamethasone, the Steroid Donald Trump Is Taking For COVID-19
by Maggie Ryan 2 weeks ago
Latest News
×