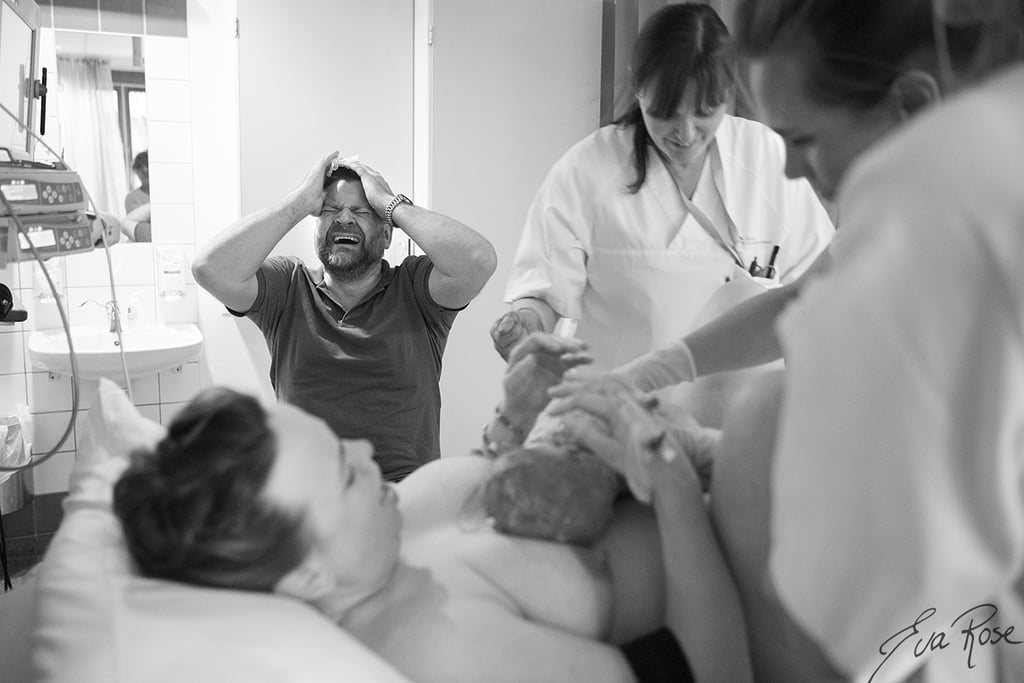 Eva Rose Furmyr, a doula and birth photographer who's been working in Norway for more than 20 years, does everything in her power to document all the emotions that come with having a child, and the birth of Marit and her husband Ander's second child was no exception. She told POPSUGAR she's grown especially close with the soon-to-be parents.

"I was Marit and Ander's birth photographer and doula when they had their first baby four years ago," she said. "They tried to get pregnant for a long time, so when the baby finally arrived, they were ecstatic. Marit and Ander are a very special couple for me."

Related:
This Dad's Reaction to His Rainbow Baby Being Born Is Beyond Moving

Because she had worked with the family before, Eva Rose knew how emotional Ander could get. She decided to tee up her camera in hopes of truly capturing the new father's emotions.

"He cried when his first baby was born," she said. "I had no idea he was going to react that way. As soon as he started crying, everyone at the birth cried with him," she explained. "The midwives still remember that birth. I photographed their second birth two weeks ago and it was just as many tears this time! He showed such a spectrum of emotions — and he's not afraid to embrace them. [He's] never had a problem sharing his emotions."

For Eva Rose, using photography to show the raw, unfiltered side of childbirth has another purpose: to make parents less afraid of the birthing process.

"As a birth photographer and a doula, I've seen how a lack of knowledge can make women unnecessarily scared during childbirth," she told POPSUGAR. "I think it's so beautiful that he's not afraid to show emotions like this and I'm hoping more men can let go and do the same. It's no shame to let your emotions come through, especially on such an important day."

Pets
If These 40 Photos of Labrador Puppies Don't Bring a Smile to Your Face, Nothing Will
by Murphy Moroney 04/10
Latest Parenting
×