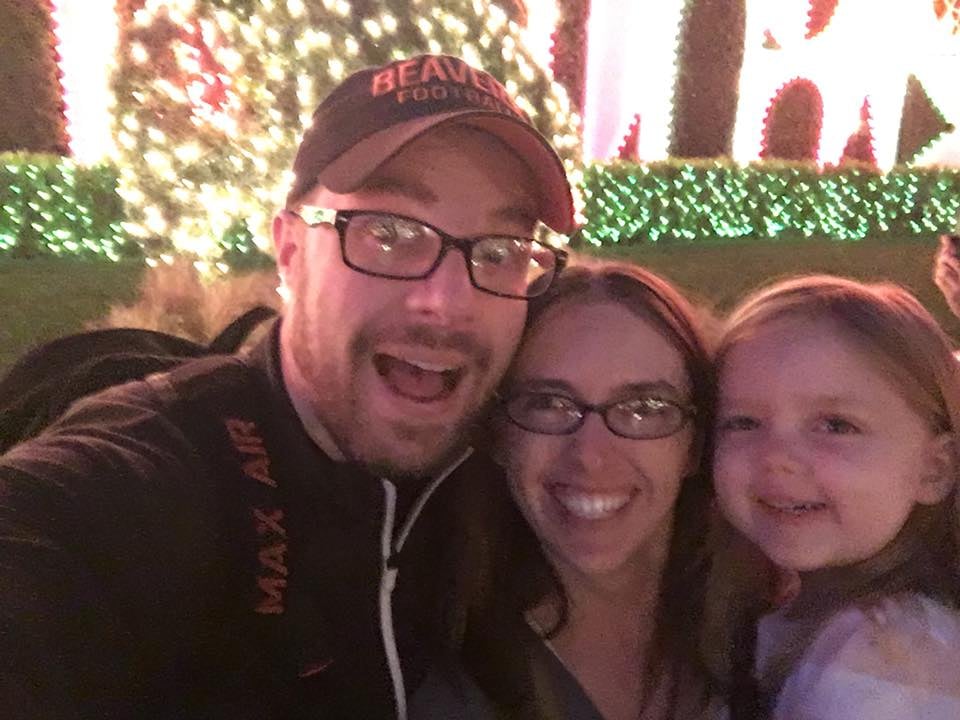 Taking your gaggle of kiddos to a Disney park includes a ton of wide-eyed smiles, full-out tantrums, and stories parents will cherish for the rest of their children's lives. And Clint Edwards, a blogger at No Idea What I'm Doing: A Daddy Blog, is no exception to the trend. In a Facebook post, he shared what it was like taking three kids under 11 years old to Disneyland for three entire days, and honestly, we're holding back tears from laughing so hard.

Clint didn't leave a single hilarious detail out of his Disneyland saga, starting with some observations he made about the joys of flying with little kids. "Connecting flights with three children are comparable to competing in an iron man," he wrote. "Flight attendant gave 3-year-old a half cup of juice, and the kid handled it like a drunk woman in heels stumbling on a dance floor with a martini."

That's the most on-point comparison we've ever heard. Fortunately, the family made it through the airport unscathed. Clint went on to highlight many of the — ahem — memorable moments they had in the park. And spoiler alert: most of them required a big chunk of change:

Stopped in candy store on Disneyland Main Street. Left having spent $500 bazillion on a quarter pound of saltwater taffy and small bag of cotton candy shaped like a mouse.

Placed 3-year-old on leash backpack because she was acting like a wild honey badger and we received a million dirty looks for keeping her alive.

Rode Pirates of the Caribbean with 8-year-old and she called me her protector. Heart melted.

Hauled 3-year-old out of Sleeping Beauty's castle sideways like a kicking and screaming surfboard and it became the background of a million selfies.

Spent two days eating junk and spinning on rides. 8-year-old threw up popcorn and churros in the night, and for some reason we were genuinely shocked as to why it happened.

3-year-old hung on every fence and guide rail. Considering how much we paid for the vacation we could've easily put a guide rail in our home. She'd have been just as happy and we could have increased the value of our home.

And that was just the tip of the iceberg for Clint.

The father of three was still in for a wild ride when it came to his oldest son: "Pretended to rip out 10-year-old's still beating heart while waiting in line for the Indiana Jones adventure ride, and he punched me in the balls. People laughed. I probably deserved it. 10-year-old discovered collectible Disneyland pins, so I cashed out my retirement fund to afford his new hobby."

To be fair, the pins are more valuable than Bitcoin in the heart of a preteen. And frankly, the assault on his private parts was a walk in the park compared to his toddler's laundry situation: "3-year-old peed in all 13 pairs of underwear. Hotel didn't have washing machines, so we washed them in the hotel sink with shampoo and hung them around the room to dry like we were a bunch of hillbillies. Went to the hotel pool and the 3-year-old informed me that it was the best part of the trip, as if all this Disneyland stuff was runner up to five feet of cold half-chlorine and half-pee water."

Unfortunately for Clint, that wasn't the last of the urine debacle. "3-year-old peed her pants while waiting 45 minutes to meet Minnie Mouse, but we didn't want to lose our spot in line, so we changed her underwear right then and there. Then she peed again, so we said to hell with it and sat that squishy little girl on Minnie's lap and called it a day."

Clint explained that despite all the craziness, he knew the trip was a once-in-a-lifetime experience. "Swore up and down that we were Disneyland-out, but feel confident that this will all happen again and again and again until we are broke or dead."

Staying Home
The Pandemic Has Magnified the Mental Load on Mothers, and We're Drowning
by Katy Anderson 5 days ago