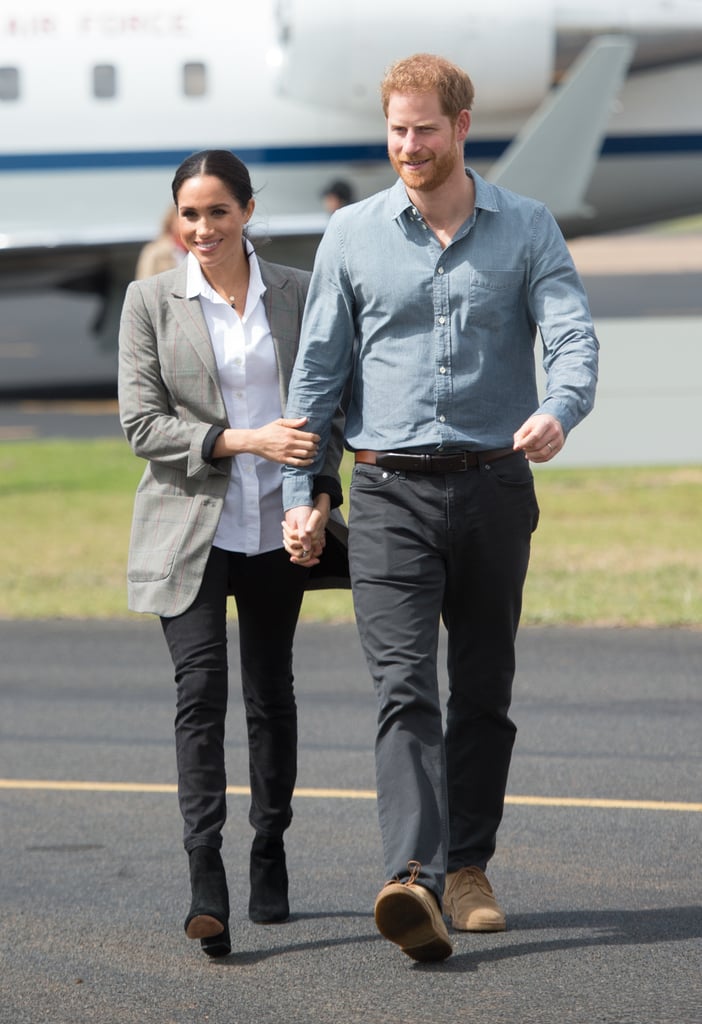 If pregnancy is already changing Meghan Markle's sleep schedule, just wait until she has the baby! Since announcing she and Prince Harry are expecting their first child together earlier this week, the adorable royal duo has been touring around Australia, and causing quite a stir with their holy-sh*t-I'm-gonna-melt PDA. But, it's the conversations going on during these appearances that are revealing more and more about the couple, and we just can't get enough of it.

While attending a beach-side chat with OneWave, a Bondi Beach surfing non-profit focussed on mental health, she spoke with Charlotte Waverly, a fellow pregnant woman, about her experience thus far. "Meghan told me that pregnancy was like having jet lag," the 35-year-old mom-to-be told Sky News. "She said she was up at 4:30 a.m. this morning doing yoga in her room as she couldn't sleep."

With Meghan about 12 weeks along in her pregnancy, we have to say she's handling all the travelling and appearances along their 16-day tour like a total queen duchess. We just know she's going to be an amazing mom. Meghan's frequently talking about her love for Vinyasa yoga, and how her mom was an instructor, but it's actually one of the best workouts to do while pregnant. Harry, we hope you're perfecting your tree pose alongside your wife during these early hours!

Read on to see some gorgeous photos of Meghan since she announced her pregnancy earlier this week, and then, see all the moments from their Australian tour that prove she and Harry are going to make the best parents.

Related:
Prince Harry Reveals the "Maximum" Number of Kids He Wants to Have With Meghan Markle
Previous Next Start Slideshow
Join the conversation
The RoyalsPregnancyThe British RoyalsMeghan MarkleCelebrity QuotesCelebrity Pregnancies
More from POPSUGAR
From Our Partners
Related Posts

Pregnancy
Yes, Unfortunately, It Can Be Normal to Experience Third Trimester Morning Sickness
by Melissa Willets 21 hours ago

Celebrity Interviews
Like Clockwork, Billie Eilish Does the Same Interview For the Fourth Year in a Row
by Monica Sisavat 4 days ago
Latest Parenting
×