Although Whitney Port lost her dad to kidney cancer nearly five years ago and says the grieving has gotten a bit easier as time has gone on, the former MTV Hills star opened up about just how much she misses her father in the latest chapter of her video series. In the emotional video, "I Love My Baby, but I Miss My Dad," Port delves into the everyday grief that comes with losing someone so important to you and how what should have been the happiest days of her life were tainted by the absence of her dad.

Buckle up, friends, because even if you are lucky enough to still have your parents, her 10-minute video is going to absolutely wreck you.

"When you have such a big death in the family, it obviously colours a lot of big moments in your life," she says. "Especially, obviously, having Sonny and [my] wedding, which are two amazing moments, but it's hard [with] something so amazing and so meaningful to you to not instantly think about how sad it is that someone you love so much isn't here to join in that happiness. When we found out when I was pregnant, and when I went into labor and had the baby, all those big moments were very bittersweet because I instantly thought about him, instantly wanted him to be there, wanted him to share in the excitement — but also to be there for me."

"When you have such a big death in the family, it obviously colours a lot of big moments in your life."

Port also touches on how happy she is that her mum is around to enjoy her grandson, but how much better things would be if her dad were present. Although she admits she finds it hard not to be negative when she thinks about all of the things that would be different if her dad were still around, Port hopes to keep a positive memory of her dad alive, especially for her son. Sonny, who shares the middle name "Sanford" with his grandfather, may be too little to understand the gravity of his family's loss, but Port is going to make sure that he knows his grandpa. 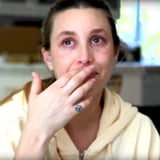 "One of the things that I haven't done that I really want to do is have more pictures of him around so I can show [Sonny] visually who my dad was and talk about him so he has a sense of who he is. I want to teach Sonny what kind of man [my dad] was and, in turn, teach him to be like him. I hope that Sonny takes after my dad in so many different ways.

I hope that he just has really good character. I hope that he's really silly and playful. I hope that he's warm and affectionate and makes people feel comfortable when they're around him. I hope he's as good at golf and as good of an athlete as him, for sure. I hope he's just a really nice person. I think what I said, just making people feel comfortable when you're around them, is such an important quality. . . . I think that so much of what I loved about my dad [was that] he just was one of those guys that everyone felt like themselves around, and I hope that Sonny's like that, too."

Port ends her heart-wrenching video by sharing what she would tell her dad if he were here, and then, as she's wrapping up the chapter, Sonny almost knowingly gives his mum his gummiest grin. Based on the look of pure joy on Port's face as she watches her son smile up at her, we think she may not have to try very hard to ensure that Sonny turns out like his grandpa.

Parenthood
Jennifer Hawkins Backs the Decisions She Makes as a New Mum — "What Else Can You Do?"
by Hannah Story 1 week ago

Babies
Anne Hathaway Finally Shared Her 11-Month-Old Son's Name, and It's a Classic
by Murphy Moroney 3 weeks ago

Staying Home
This Hilarious Mom Created a Cubicle Cluster For Her Kids in Online School, and It's So Genius
by Yerin Kim 04/10