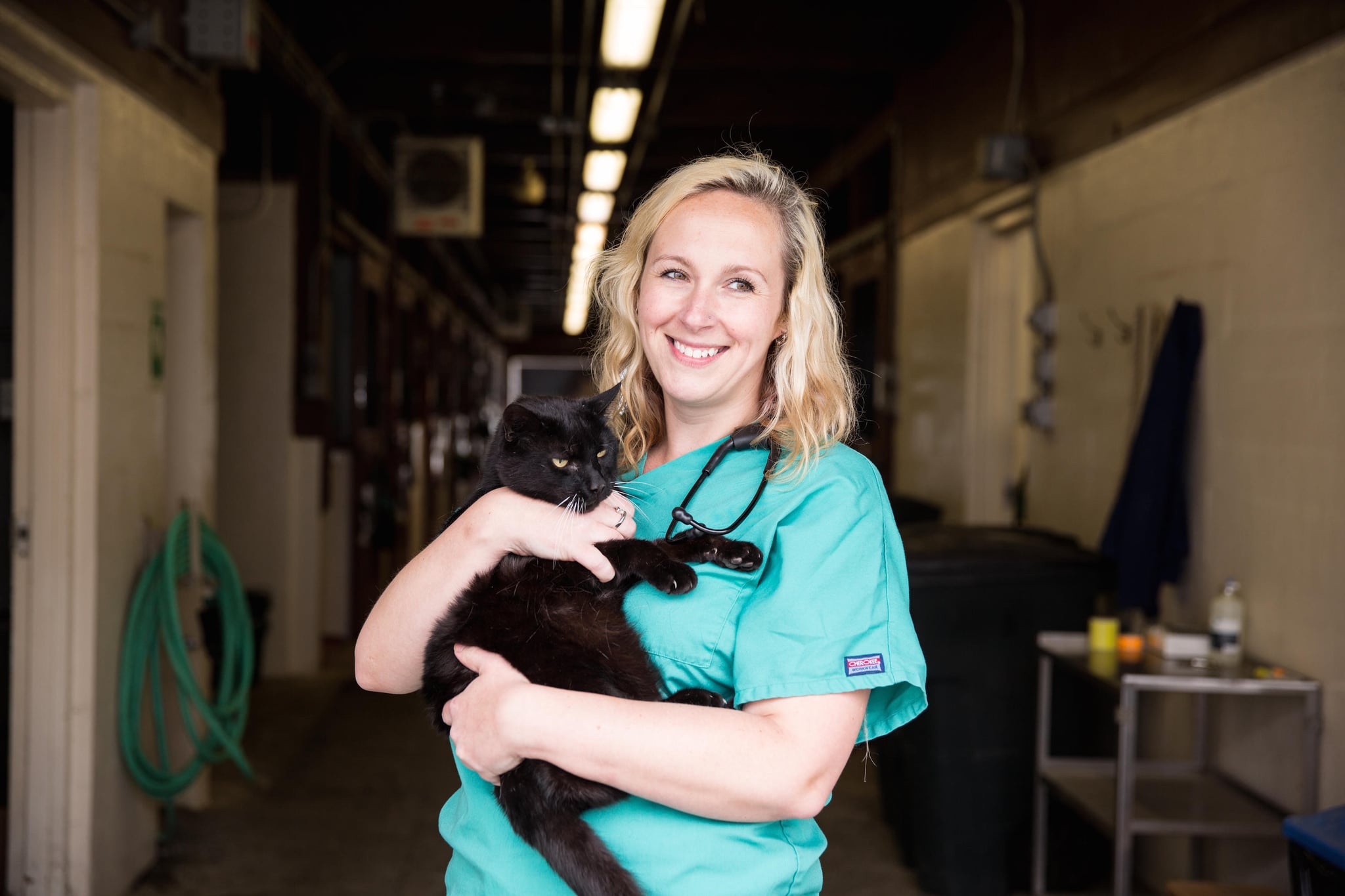 Melanie Lang is a super busy aspiring veterinarian working overtime and overnight to achieve her dream of working with animals (and the humans who love them). She's one of the subjects of Animal Planet's series Life at Vet U, but she's not your typical veterinary school student. For one thing, she's older than many of her classmates, having initially built a business career throughout her 20s. At the age of 30, she did a 180-degree turn on her career path by quitting a steady job at Verizon Wireless and enrolling in veterinary school.

Melanie chatted with POPSUGAR about everything that went into making this career shift: the sacrifice, satisfaction, discomfort, and — most importantly — joy.

POPSUGAR: Tell us a little bit about what you were doing before you decided to become a veterinarian.

Melanie Lang: Well, my undergraduate degree is in English literature. And the big joke when I was in college was that I had to get really good at asking people if they wanted fries with that because nobody hires English majors. Which is not true! So I kind of ended up falling into a job with Verizon Wireless and I started out sort of entry level, answering the phones at a call centre, getting yelled at because their bills were too high or they didn't understand them, things like that. And really quickly kind of climbed the ranks. . . . My end job there the last couple years was in what was called the "new hire experience" department and so I spent a lot of time basically training, coaching, and mentoring new hires to the company and then I would also get sent to call centres in the Midwest region for training not only customer service representatives, but also supervisors and managers to be better coaches and mentors so that the company as a whole could be better. And I really liked it, it was a great job, I got to do a lot of things that I loved, the people were great, the company was pretty phenomenal to work for.

But you know, it just wasn't that thing that forces me to get out of bed every morning when you open your eyes and say, "Yes, I get to go do this today!" So I needed a little bit of a change.

PS: Was there a specific turning point when you made the decision to quit your job at Verizon and turn to veterinary school?

ML: I don't know that there was a specific moment but when I initially started college at 18, I was a pre-veterinary major. . . . At 18, I didn't really realise that you had to do a lot more than love animals to be a veterinarian. You had to like, love animals — and science and medicine and problem-solving. I don't think I was mature enough at that time but it was always that thing that I kind of gave up on, you know?

When I got to the point in my career where it was like, this is not something that is jazzing me and getting me out of bed every morning, I always thought about [how] I gave up on veterinary medicine when I was like, young and dumb. And why not try that again? What's the worst thing that could happen, is that I realize it's not for me and I made the right decision when I was 18? But I had to at least give it another shot.

PS: Would you go back to your 18-year-old self and tell her to stick with the pre-vet major, or were the Verizon years valuable in their own way?

[Working at Verizon] definitely helped me to learn how to read people better and to gauge how I should present myself so that they respond best so that I can kind of get them on my side. . . . Veterinarians are, I think, notorious for being completely bad at selling the value of our service and selling ourselves. People always are like, "Yeah, I went to my vet and it was $200 for a check-up!" But it's because, you know, you don't really position the value of the services and I learned a lot working for Verizon for those six years about how to sell my value, whether it be in business or whether it be in veterinary medicine.

PS: What were your biggest fears about taking this leap into a totally new career?

ML: Gosh, there were a lot of fears. I think it was really multifaceted because you know, number one, there's the fear of: "I am going to fail and I'm not cut out for this science stuff." And then there's also the: "Holy crap, I'm 30! And I'm going to go back to school?!" Because I had to do all of my prerequisites so I was in like, Chem 101 with a bunch of 18-year-olds. I was like, "Man, I'm gonna be that weird old lady in the class!" [laughs] And then there's the absolutely crippling debt that you go into in order to pursue a career in veterinary medicine. . . .

But also, you have so much excitement that you're embarking on something new and you're pushing yourself kind of out of your comfort zone and that's always something that's important to me; I always like to challenge myself. And also, you know, when I was growing up, I was in probably like, eighth grade or ninth grade and my mum who — neither of my parents had a college education and my mum, she had always worked in fast food, and she was absolutely miserable, and she said, "You know what? Forget this. I'm gonna go to night school and I'm gonna learn how to be an X-ray technician." And then she did that, and . . . she absolutely changed her life — and she was 40! I was like, man, if she can do that at 40, I can do it at 30. So I've always kind of had that in the back of my mind, that things worked out really, really well for her, and they could work out just as well for me. 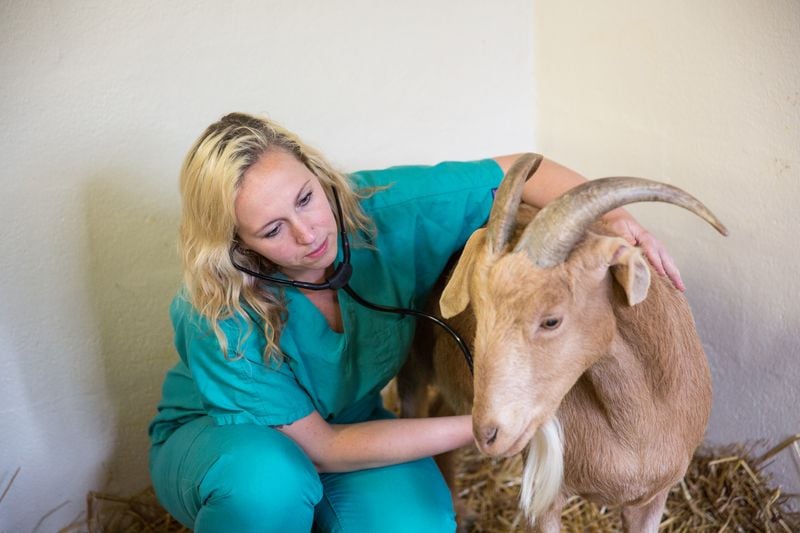 PS: What kind of advice would you give to someone thinking about making a similar change? What have been some of the hardest things about making this change?

ML: I think the hardest thing for someone who is an adult who has had a career — especially if you have to go back to school and especially veterinary school — your time is not your own anymore. You're beholden to this class schedule and in clinics you have to be there. . . . I think it was very hard to go from feeling like an adult and owning a house and paying bills and buying lots of organic produce to being, you know, living like a very poor student again and being filled with all of the insecurities and anxieties that come along with being a student and trying to do well.

I also think, I'm surrounded by people who are 10 years younger than me, and you lose a lot of mental acuity in 10 years! I felt like I had to work a little harder than a lot of my peers just because things weren't as fresh for me and I wasn't as quick sometimes as they were. I think that's just something to keep in perspective and I think it's important to know that that will happen and there are going to be days when you're gonna say, "Man this was the worst decision I have ever made because I feel stupid, I'm not making any money, I'm in debt, I don't have much free time."

But at the same time you've got to keep the end game in perspective and I always have told myself — even now when I'm working 100 hours a week and my life is not my own — I tell myself that I chose this. . . . Yeah, I'm tired, things are tough, I'm tired, and I'm poor, but I picked this. I wanted to do this and I'm doing the thing that I wanted to do and that's never a bad thing.

PS: Have you had any moments that have totally affirmed your decision?

ML: I feel like I do have them often, especially now — I spend a lot of time working in the emergency room, and right now I'm working overnights. And so when someone comes into the emergency room with their dog at three o'clock in the morning, it's never a good thing. There's a lot of fear and anxiety there. I recently had a case where there was a dog and he was vomiting, vomiting, just could not stop vomiting. And the owner was so afraid that he'd gotten into some poison or a toxin or things like that, and before I even walked in the room this poor woman was just in tears. And I was able to kind of talk her down off of that ledge . . . and ended up figuring it out, it was a pretty simple fix, it was just a case of we did some x-rays and he had gotten into the trash and eaten some pig bones and they were just hanging out there in his stomach, and so he was really nauseous and not feeling well because of it. And you know, gave her some medication, sent her home, and called her up a couple days later and the dog's doing really fantastic, and it's just so nice to talk to owners and they're really thankful for your care. . . . Those are the kind of moments where I'm like, gosh, I made a good decision and I might actually one day be really good at this!

PS: Final question: As a kid, what did you want to be when you grew up?

But at the same time, ever since I was little, I've always been an enormous animal-lover. . . . I was always that little kid who wanted to be surrounded by cats. [laughs] And so you know, now I'm kind of doing that! So I definitely can't complain. I am often surrounded by cats. It's probably a nightmare for a lot of people, but for me? I'll take it. 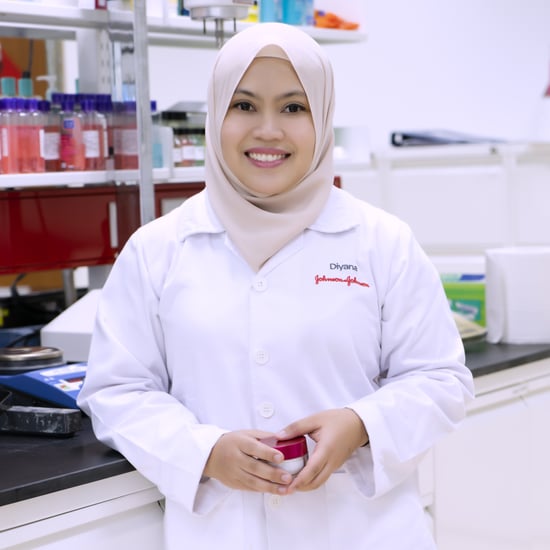 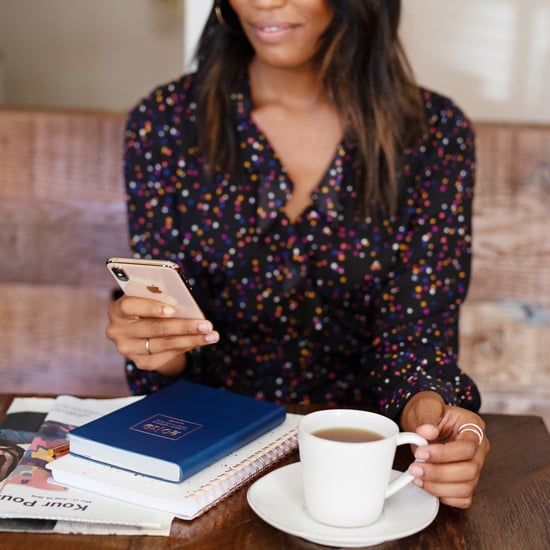 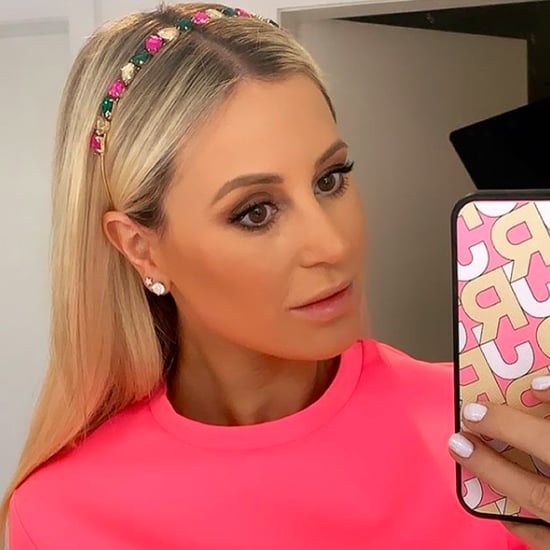 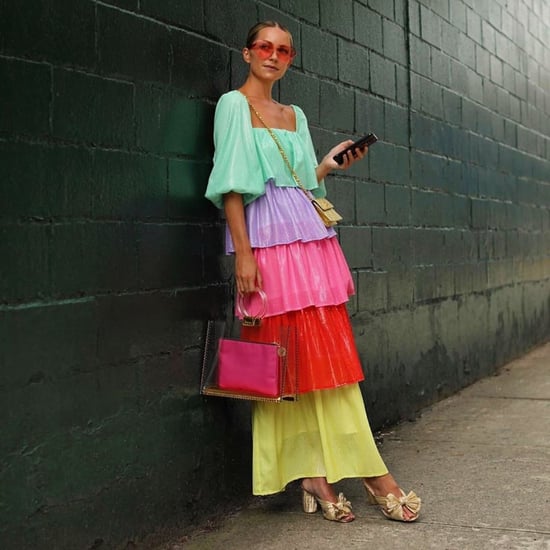 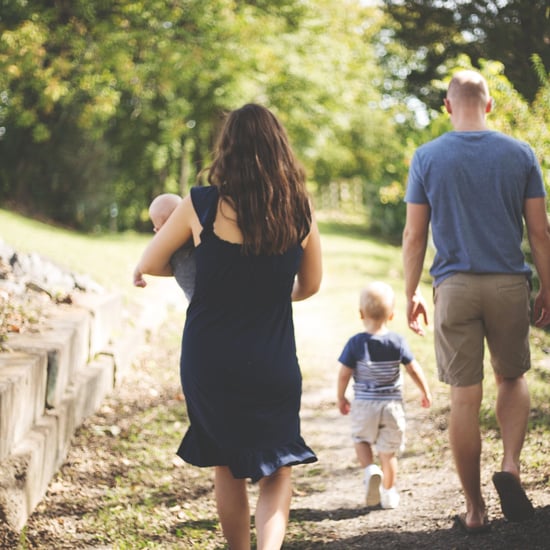 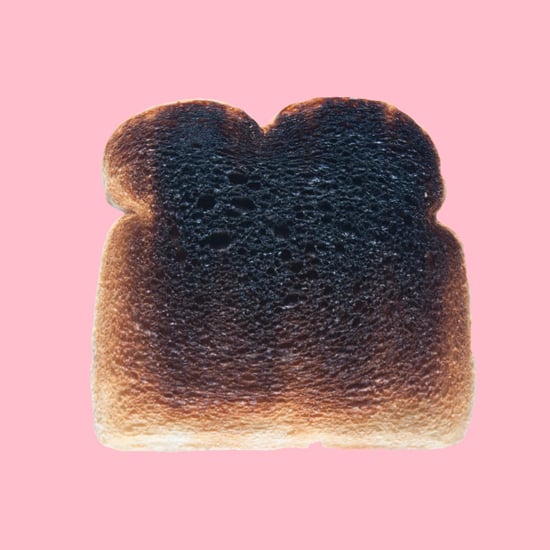