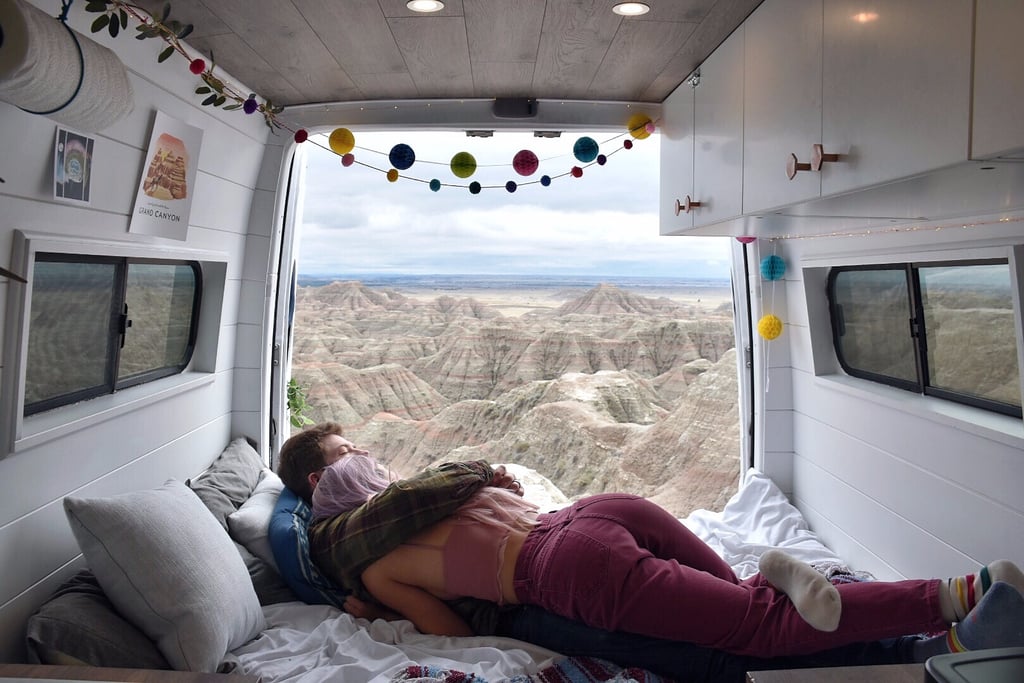 This Married Couple Revamped a Van, Hit the Road, and Is Travelling Across America

"The first year of marriage is always the hardest." Spoken like a fraternity brother to a new recruit on day one of initiation. You know the look: slight smirk, soft hand on your shoulder, perhaps even a head nod.

No one was shy about reminding us what a challenge marriage would be. Now imagine our surprise when the honeymoon was but a glimpse in our rearview mirror, and my husband and I were still in marital bliss. Hmm, maybe it hits after a few months. Four months went by, and still no more than a tiffle over the dishes (because if you don't grunt over who does the dishes, you're both Virgos). Fast forward seven, eight, ten months and when friends asked me how married life was I got that faraway look in my eyes like I'd already had three glasses of wine. "Wonderful," I would say, immediately accompanied by, "no, really!"

Our first year of marriage was magic. I know what you must be thinking. Um, this is irritating, where's the lesson learned here? It's coming. See, we've given this time in our lives a lot of thought, and we've reasoned that the big changes that come with marriage didn't really begin for us until about two months ago. It was right around our first wedding anniversary in August of 2017 that we traded in our Brooklyn shoebox for a mobile one . . . about 6.5 square metres give or take.

Luke and I live, work, and travel throughout the country in a converted Sprinter van that we built out ourselves with the help of my family back in San Francisco. Living in a van has really grown into quite the phenomenon (ask our parents, they loving finding #vanlife memorabilia and sending it our way). People of all ages have decided to ditch their stationary addresses for a life on the road. Van lifers across the globe commit to this lifestyle for various reasons but for us, it was all about that search for adventure. Safe to say, it's not just adventure we've found but also the biggest adjustment we've had to make in the seven-plus years we've been together. When we got married nothing really changed; same house, same possessions, same friends, same jobs. It was business as usual, but sprinkled with extreme joy at the idea we were with our forever person.

Related:
Why I Quit My Job in New York City to Backpack Across Europe

When people ask us about the first year of marriage and the lessons we've learned, it will be these months we refer back to. Van life is like our marital hazing. 24 hours a day, seven days a week with the same person will definitely teach you a thing or two about what it means to be a life partner. Read on and, who knows, maybe there's something that resonates with you a bit more than ye olde, "the first year's the hardest" adage.