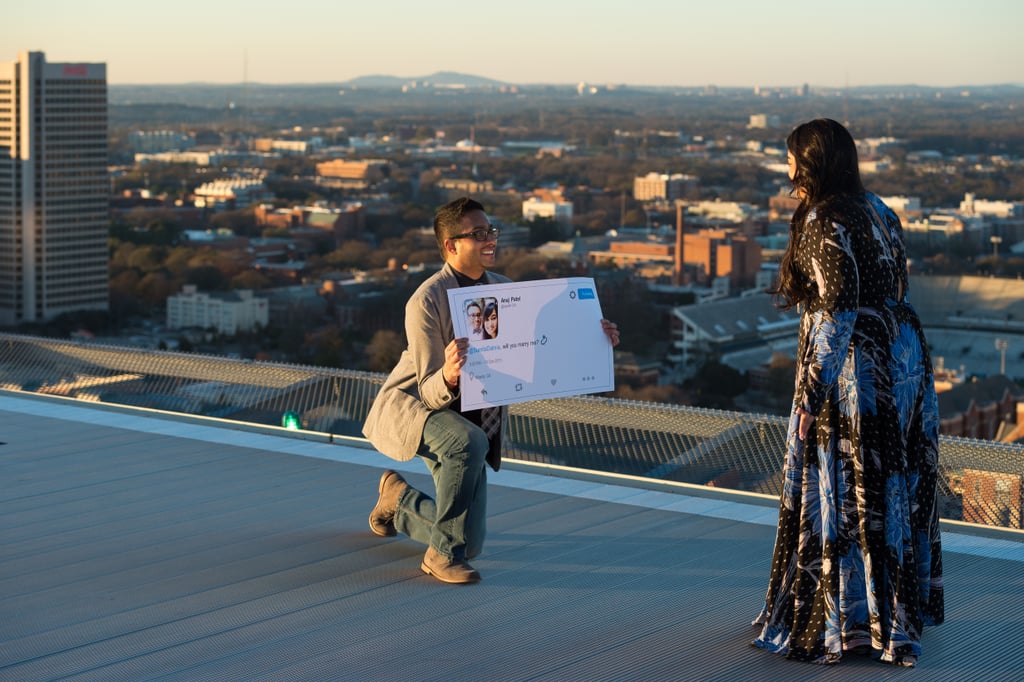 1 Guy's Insane Proposal Could Only Happen in Today's World

Romance has no limits — except when it comes to 140 characters on Twitter. That didn't stop one couple from falling in love over the popular social media platform and actually creating a proposal around it. The couple, Sumita Dalmia and Anuj Patel, first met on Twitter on Sept. 13, 2013. Sumita is an attorney for McDonald's, and Anuj is a digital marketer for IMG. Sumita found Anuj by searching on Twitter for Jazzoo tickets, they exchanged a few tweets, and then they started dating.

So, of course, when it came to proposing, Anuj knew it needed to be themed around Twitter. He created a scavenger hunt in Atlanta and live tweeted clues, along with the hashtag #SumitaFindAnuj. Anuj also left paper clues at each stop Sumita went to — all of which were special to their relationship. The clues themselves were printouts of the live tweets with the right time stamp. Clearly, Anuj planned this so well and wanted it to play into Twitter as much as possible.

36 Andrew Young International Blvd NE is the address for your next stop. Go quickly now, you're getting close, "chop-chop!" #SumitaFindAnuj

The last stop in the proposal involved Sumita changing into a dress and heading up to the top of the roof of the W Hotel. To end it all, Anuj proposed with a poster that showed a tweet asking her. She said yes.

The couple that meets on @twitter stays on @twitter. Social media scavenger hunt proposal was a success. #shesaidyes pic.twitter.com/pOyWxzrnRJ

How does Sumita feel about it? She loves it. "I thought it was so reflective of how we met," she said. And though their love story is going viral, Sumita is not concerned about whether or not anyone will copy their idea. "I think that there is a definite possibility in this digital age to hear of stories like this more often," she said.

The happy couple's next stops include getting married this fall in Georgia. Their official hashtag? #tweetshearts2016, of course. They hope that maybe Twitter will consider sponsoring them or throwing a little love their way. Look ahead to see photos of the special day.

Staying Home
Netflix Party Is Now Teleparty, and It Includes Hulu, HBO, and Disney+
by Ashley Broadwater 15 hours ago

Celebrity Style
Kamala Harris Dances in a Rainstorm — Of Course, Converse Are the Best Shoes For That
by Sarah Wasilak 21/10
Latest Tech
×